It feels like an age since we’ve had a Plextor drive in for testing. Last year, the company released a slew of its M6 model drives, covering standard SSD and mSATA. The 256GB M6M in particular is one of the more recent of the M6 drives, although it too is over a year old now. 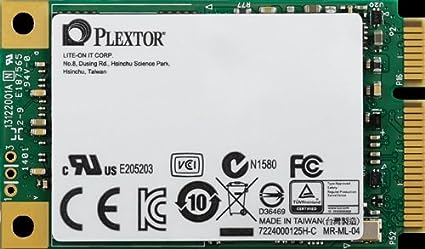 The Plextor 256GB M6M mSATA uses the same Marvell 88SS9188 as the Crucial MX200 mSATA, but with a Toshiba manufactured 19nm Toggle MLC NAND. Feature support comes in the form of TRIM, S.M.A.R.T.
, shock resistance, AES 256-bit encryption and low power consumption. The lifespan of the M6M is rated at a decent 1.5 million hours which, like most of the mSATA drives tested, should last you beyond the life of the machine it’s installed in.

The Plextor M6M range of mSATA drives come in a variety of different capacities, from 64GB through to 128GB, 256GB and finally 512GB. To go beyond the 512GB mark and into the terabyte realm, you’ll need to look to the M.2 and standard SSD forms available from the company.

In terms of the ATTO benchmark performance, the Plextor M6M didn’t quite come up to the same standard as the other drives we’ve tested. The 8192KB file size recorded a read speed of 516MB/s, while the write speed for the same sized file transfer was just 434MB/s. Although the read speeds were over the 500MB/s mark, they’re still nearly 40MB/s slower than the previous slowest reader.

However, the smaller 4K file size proved to be somewhat better than most of the other drives tested, with the exception of the Samsung 850 EVO. The read speed for 4KB was 247MB/s, and the write speed was a very reasonable 214MB/s.

Our basic boot to the Windows 10 desktop, realworld test was timed at around 8.5 seconds – a tad slower than the Crucial MX200 mSATA drive. Again, though, it’s worth mentioning that eight and a half seconds is still pretty quick to get to the desktop, even by today’s modern speed standards. If you’re as old as we are, then you’ll recall having to wait minutes in some cases before you could actually use your computer after powering it up.

On the face of it, the Plextor 256GB M6M mSATA is a good enough drive. It’ll certainly put some spring into the step of an older laptop or small media center. However, the main bugbear we have with it is the cost. For around £104, it seems rather expensive, especially since the Crucial MX200, at 250GB. Even with Plextor’s good name on the product, would you be willing to fork out an extra £28?Overall, it’s a good mSATA drive. It may not have the fastest benchmark numbers to its name, and it’s a little too expensive for our liking, but if it’s all you have available and you’re desperate for a significant performance upgrade, then it’ll do the job well enough.