The Transcend MTS400 is a remarkably compact SSD, which comes in four different capacities: 32GB, 64GB, 128GB and the 256GB one we’re reviewing in this instance. It weighs around 4g and measures just 22 x 42 x 3.5mm, roughly half the length of the previous ‘gumstick’ M.2 SSDs we’ve looked at. The power consumption is around 0.5W when idle, rising to 3.7W when reading and 4.4W when writing; life expectancy is rated at 1.5 million hours. 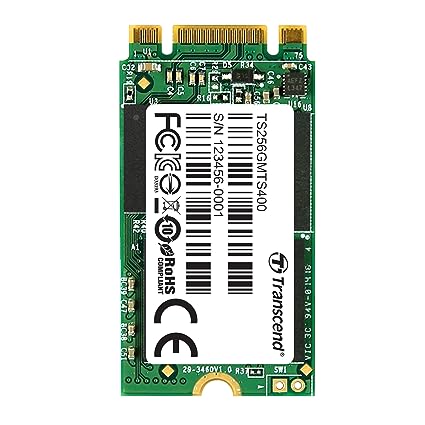 This particular model uses Transcend-designed firmware and a TS6500 controller (a rebranded SM2246EN). Other features include Power Shield to help prevent data loss in the event of a loss in power, flushing the cache in a similar way to the Kingston 240GB SSDNow model. DevSleep is also fully supported, dropping the power used and closing down the SATA connection to conserve the battery.

In addition to this, the MTS400 supports Intel Smart Response Technology, where you’re able to configure the SSD to work as a memory cache between the hard drive and system memory. It’s an interesting technology, although to be fair you probably wouldn’t want to waste 256GB of SSD storage purely as a cache. Thankfully, the 32GB and 64GB models also support this feature, which could prove more beneficial.

The read benchmark from our ATTO test with the 8192KB transfer was 563MB/s, while the write speed was 328MB/s – generally good numbers for an SSD, but the write speeds are quite low compared to the other SSDs on test. The smaller transfer sizes proved to be good too: read speeds for 4KB were 301MB/s and write at 4KB was 260MB/s.

The benchmarked speeds were more or less in line with the other models on test here, except for the PCIe HyperX Predator for the 8192KB test. It’s interesting to see the lesser write speed of 328MB/s, while the read speed in the same test was 9MB/s faster than the Kingston 240GB.

Either way, the Transcend MTS400 fared well against the other drives we have. For around £90, it’s reasonably priced, and the smaller size is certainly a plus for those who are limited on space.

To conclude, then, the Transcend MTS400 M.2 SSD is a good all-round and quick storage device that will no doubt serve you well. Plus you get an extra 16GB of space for £10 less than the Kingston model.