Samsung’s premium Pro drives are pretty much the go-to SSDs for enthusiasts seeking the best in solid-state storage performance. The latest 960 Pro is a barnstormer of an SSD. But it ain’t cheap.

In 512GB M.2 configuration — the smallest option. That’s where the 960 Evo steps in, again in M.2 format. Like previous Evo models, it gives you much of that Samsung SSD goodness, just in a more affordable package, in theory. 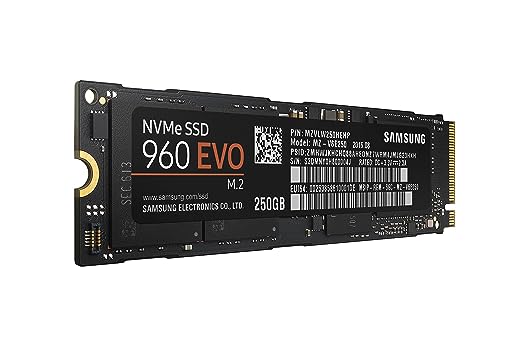 The core specs look promising. You can have it in 250GB format, as tested, which brings the price down dramatically, at well under half the price of the smallest Pro. The Evo also comes with the Polaris controller chip — Samsung’s latest — with which comes support for both quad-lane PCI Express 4.0 connectivity and the solid-state-friendly NVMe control protocol.

Where things begin to differ involves the flash memory. Both drives sport Samsung’s cutting-edge V-NAND, so-called because of the layers (48 of them) of memory cells, stacked vertically atop one another. The difference with the Evo compared to the Pro is that it gets triple-level cell memory to the Pro’s dual level. The former makes for greater data density and thus lower prices. But it also comes at a cost to both performance and durability.

In terms of the official specs, the peak sequential numbers look solid at first glance. Samsung says it’s good for 3.2GB/s reads and 1.5GB/s writes. The latter is a fair distance off the 2.1GB/s of the smallest 960 Pro, for instance, but it’s still a big old number.

Look closely at the spec sheet, however, and you’ll note that write performance is enabled by the SLC write cache, a block of flash memory running in single-level mode and acting as a write buffer. For this Samsung 960 Evo 250GB drive, it measures 13GB.

If you exhaust the cache, performance drops off dramatically. Samsung says sustained performance once the cache is filled comes in at just 300MB/s, Yikes.

Drive endurance, meanwhile, tumbles from 400TB for the entry-level 960 Pro to 100TB. Samsung clips the Evo’s warranty down to three years from the Pro’s five, too. That said, there’s less collateral damage to the cost-cutting when it comes to random access performance. The Evo 2S0GB is good for 330K IOPS reads and 300K writes.

The Evo delivers on its claimed peak performance in a benchmark like ATTO, with 3.2GB/s reads and 1.5GB/s writes. More nuanced metrics that sidestep tricks such as on-the-fly compression, however, show the limitations of the Evo’s cost-conscious config. For starters, it only musters around 1.7GB/s reads in CrystalMark’s sequential benchmark.

The more revealing measure is the 89 seconds the Evo needs to motor through our 30GB internal file copy test — roughly twice as long as the Pro.

On the other hand, the Evo is seriously slick in CrystalMark’s 4K random access tests.

How much you’re worried by the patchy sequential performance depends on your workloads. The Evo is still fast, but if you routinely shunt large files around, you will inevitably keep bumping into the limitations of that SLC cache. Those caveats aside, this is a nice little M.2 drive from arguably the best in the SSD business.

Not as amazingly speedy as its 960 Pro sibling, but given it’s quite a bit cheaper that’s a fair compromise.

It gives you much of that Samsung SSD goodness, just in a more affordable package, in theory.

Not as amazingly speedy as its 960 Pro sibling, but given it's quite a bit cheaper that's a fair compromise.