NVMe SSDs: Everything you need to know about this insanely fast storage

The new wave of memory – Based storage blows away the older generations.

NVMe (Non-Volatile Memory Express) is no longer a nice-to-have storage technology. If you’re shopping for a new PC, it’s a feature you should actively seek out. More­over, if your PC is of fairly recent vintage, you should upgrade to NVMe. Here’s why. 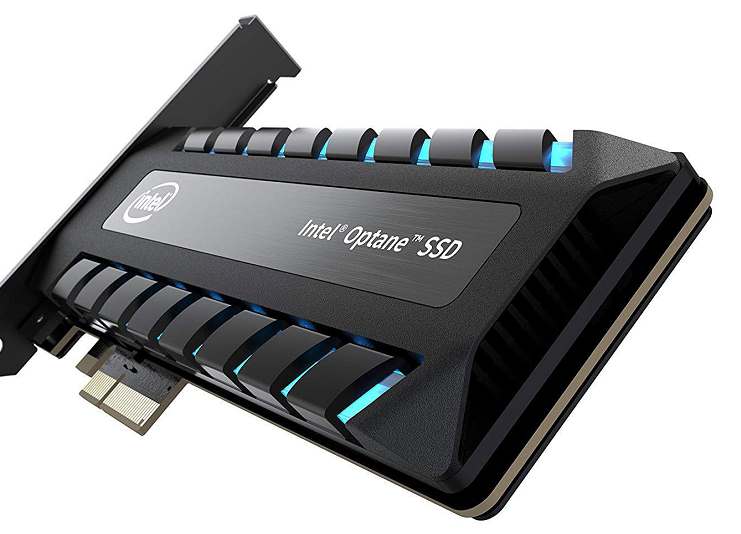 NVMe is a communications standard/ protocol developed specially for SSDs by a consortium of vendors including Intel, Sam­sung, SanDisk, Dell, and Seagate. It operates across the PCIe bus (hence the Express in the name), which allows the drives to act more like the fast memory that they are, rather than the hard disks they imitate. Bottom line: NVMe is fast. Really fast. Like never-have-to- wait-again-for-your-computer fast.

Not to belittle the efforts of CPU and GPU vendors over the last decade, but the reason the latest top-end PCs seem so much faster is because of the quantum leap in storage performance provided by SSDs. Storage was the last bottleneck for real and perceived performance, but it’s now wide-pour with a vengeance.

If you’ve bought, say, a MacBook Pro in the last two years, you may have noticed that you hardly wait at all anymore for mundane operations. Programs pop open, files load and save in an instant, and the machine boots and shuts down in just a few seconds.

That’s because the NVMe SSD inside the latest MacBook Pro reads and writes data literally four times faster than the SATA SSDs found in previous generations. Not only that, but it locates them 10 times as fast (seek). That’s on top of the four- to five-fold improve­ment in throughput and ten-fold improve­ment in seek times already provided by SATA SSDs (over hard drives).

The approximate performance ceilings for the three mainstream storage technologies as things now stand are:

Hard drives still offer tremendous bang for the buck in terms of capacity and are wonderful for less-used data. But for your operating system, pro­grams, and oft-used data, you want an NVMe SSD if your system supports it, or a SATA SSD if it can’t.

Not that you need sustained throughput like this very often, but NVMe makes short work of transferring files of any size. HDD = 200MBps, SATA SSD = 550MBps, NVMe SSD = 3GBps.

The CPU and GPU development curve pales in comparison to that of storage over the last 10 years. HD = 2-5 ms seek, SATA SSD = 0.2 ms seek, NVMe SSD = 0.02 ms seek. Shorter bars are better, but this is an overall average. Some drives in each category might do better, some will do worse.

There’s a reason why we still have SATA SSDs and NVMe SSDs. Knowing the potential of memory-based SSDs, it was clear that a new bus and protocol would eventually be needed. But the first SSDs were relatively slow, so it proved far more convenient to use the existing SATA storage infrastructure.

Though the SATA bus has evolved to 16Gbps as of version 3.3, nearly all commer­cial implementations remain 6Gbps (roughly 550MBps after overhead). Even version 3.3 is far slower than what today’s SSD technology is capable of, especially in RAID configurations.

For the next step, it was decided to leverage a much higher-bandwidth bus technology that was also already in place—PCI Express, or PCIe. PCIe is the underlying data transport layer for graphics and other add-in cards. As of gen 3.X, it offers multiple lanes (up to 16 in most PCs) that handle darn near 1GBps each (985MBps).

PCIe is also the foundation for the Thun­derbolt interface, which is starting to pay dividends with external graphics cards for gaming, as well as external NVMe storage, which is nearly as fast as internal NVMe. Intel’s refusal to let Thunderbolt die was a very good thing, as many users are starting to discover.

Of course, PCIe storage predates NVMe by quite a few years. But previous solutions were hamstrung by older data transfer protocols such as SATA, SCSI, and AHCI, which were all developed when the

The SanDisk Extreme Pro offers the exact same performance as the WD Black NVMe. Because, wait for it—it’s the same drive. The drive uses four PCIe lanes for a theoretical maximum throughput of well over 3GBps.

An M.2 NVMe SSD such as the relatively affordable and very fast (except for extremely large transfers) Samsung 970 EVO can live in an M.2/PCIe slot, or in a regular PCIe slot (x4 or greater) by means of a cheap adapter card.

hard drive was still the apex of storage technology. NVMe removes their con­straints by offering low-latency commands, and multiple queues—up to 64K of them. The latter is particularly effective because data is written to SSDs in shotgun fashion, scattered about the chips and blocks, rather than contiguously in circles as on a hard drive.

The NVMe standard has continued to evolve to the present version 1.31 with the addition of such features as the ability to use part of your computer’s system memory as a cache. We’ve already seen it with the super cheap Toshiba RC100 we recently reviewed, which forgoes that onboard DRAM cache that most NVMe drives use, but still performs well enough to give your system that NVMe kick (for every­day chores).

WHAT YOU NEED TO GET NVME

It’s possible to add an NVMe drive to any PC with a PCIe slot via an adapter card. All recent versions of the major operating sys­tems provide drivers, and regardless of the age of the system you will have a very fast drive on your hands. But there’s a catch.

To benefit fully from an NVMe SSD, you must be able to boot the operating system from it. That requires BIOS support. Sigh. Most older mainstream BIOSs do not support booting from NVMe and most likely, never will. There’s simply no benefit to the vendors to add it, and a very real downside: You’re unlikely to upgrade a system that’s been updated with NVMe unless you play PC games or do something truly CPU-intensive, like editing 2160p video.

Most NVMe SSDs being sold in the consumer space use the M.2 form factor. But simply having an M.2 slot doesn’t guarantee NVMe compatibility. M.2 was designed to support USB 3.0, SATA, and PCIe. Most early M.2 slots supported only SATA. Read your system or motherboard user’s guide, or check online. Note that the MSATA slot, which is the precursor, looks very similar. 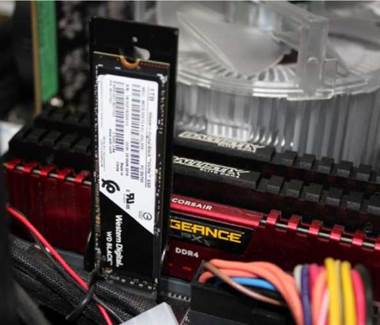 There’s no way to tell from looking at a slot whether it supports PCIe and NVMe, but you can tell the difference between a PCIe x2 and PCIe x4 slot. The former, called B-keyed (a key is a rise that marries with a gap in the contacts on the drive), has six contacts separated from the rest, while the latter, M-keyed, has five contacts separated from the rest on the opposite side. There is no hard-and-fast rule, but many B-key slots were SATA only. If you have a B/M-keyed slot with both sets of contacts separated, the most common today, you’re golden. These are also sometimes referred to as socket 2 and socket 3.

If your socket lets you down, it’s time for the $25 PCIe M.2 adapter card that I men­tioned. Plextor’s M9Pe and others are avail­able already mounted on PCIe cards as ready-to-rock products.

What you as an end-user should avoid are 2.5-inch NVMe drives. These require the

While our testbed’s M.2 slot supports PCIe and NVMe, yours may not. Shown here is WD’s Black NVMe SSD—a very worthy drive that sustains transfers better than its Samsung 970 EVO competitor.

On the off-chance you’re using one of the rare Windows PCs that supports Thunderbolt (many with Asus motherboards do), you may be able to use an external Thunderbolt PCIe enclosure to add NVMe to your system. This works like a charm on a Thunderbolt Mac that’s new enough to run High Sierra.

NOT ALL NVME DRIVES ARE CREATED EQUAL

While just about any NVMe should make your system feel quicker, they are not all alike. Not even close. Where Samsung’s 970 Pro will read at over 3GBps and write at over 2.5GBps, Toshiba’s RC100 reads at 1.2GBps and writes at just under 900MBps. The difference can be even greater when the amount of data written exceeds the amount of cache on board.

A number of factors that affect perfor­mance, including the controller, the amount of NAND on board, the number or PCIe lanes (see above), and the type of NAND. Here are some rules of thumb:

Check out our SSD reviews for the skinny on individual drives.

NVME MEANS NO REGRETS FOR A LONG TIME

If all that hasn’t driven home the point, let’s say it again: NVMe is the storage technology you want for your current or next PC. Unless you’re a gamer or high-resolution video editor, it virtually guarantees that you won’t feel the need to replace your current system for quite a while—at least because of performance. Indeed, I’ve felt zero compulsion to replace my six- to seven-year-old systems since they were upgraded with NVMe SSDs. Zero.