Crucial MX500 500GB review – THE MARCH OF TECHNOLOGY waits for no man. Unless the poor sap in question relies upon the SATA interface for his PC storage connectivity. In which case, technology is happy to sit down and soak up the view. 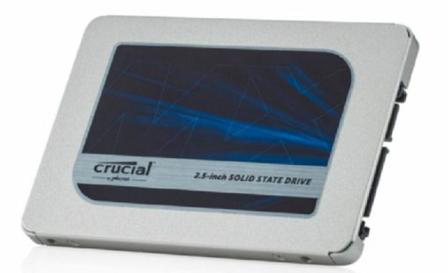 That’s because of the limitations associated with SATA. First, there’s a hard bandwidth limit of around 550MB/s, net of overheads. Then there’s the fact that SATA is reliant on the AHCI control protocol, which hails from the mists of 2004, making it positively antediluvian in tech terms. Critically, it also means that AHCI was never conceived with solid-state storage in mind. It was designed to suit magnetic drives and read heads, not NAND chips.

It’s a plain old SATA drive, so all of the above limitations apply. Not that this should be a huge surprise, given Crucial is yet to launch a PCI Express-based drive for consumers that supports the more modern NVMe control protocol. That, in turn, reflects the fact that the market for add-in drives such as this remains dominated by SATA, regardless of its limitations.

The MX500 does bring some substantial hardware changes to Crucial’s flagship line of SSDs. It gets parent company Micron’s new 64-layer 3D TLC NAND memory. Just as important is the switch from Marvell to Silicon Motion for the controller chipset. That said, the raw specifications are little changed over the previous MX300 drive— and. indeed, the MX200 before that.

The exceptions include a much improved 350TB data endurance rating, and an upping of the warranty from three to five years. It’s the latter that marks out the MX500 as a drive that can trade blows with premium SATA offerings. Five years is very impressive. In subjective performance terms, of course, you’d do well to pick one premium SATA drive from another much of the time. But five years versus three years is a difference you’ll really appreciate in the form of an extra two years of full confidence that you’re covered.

For the record, the MX500 delivers solid, if predictable, numbers in the bulk of our benchmarks. Peak reads rock in at 564MB/s, writes at 522MB/s. Random writes of 39MB/s are decent for a SATA drive, ditto the 99MB/s for random writes, even if the latter is a little slower than Crucial’s own BX300 budget drive. You can say the same for the 147 seconds it racks up on our internal file copy test.

In reality, most of those numbers are fairly academic, in that they’re free from obvious flaws. The same goes for our subjective experience with the drive shunting data around. It doesn’t suffer from any obvious glitches or the infuriating cache-related slowdowns that some drives exhibit. That’s true despite the fact that the MX500 has an SLC write caching mode, designed to accelerate bursty workloads— we didn’t find a usage scenario where we could detect its limitations.

If the new MX500 therefore establishes itself as a solid all-around SATA SSD, the final test involves bang for buck. That’s seriously competitive for a drive with such solid performance and a five-year warranty. It’s not often that a SATA drive makes such a compelling case for itself, such is the maturity of this particular market. But the price and that five-year cover are a killer combo. It really is hard to think of many convincing reasons to buy anything else.