Ten times the data density, 1,000 times faster, 1,000 times better endurance. All of this and more Intel claimed three years ago for its revolutionary 3D XPoint non-volatile memory tech, now branded Optane. Those claims were made in comparison to the nonvolatile memory tech that dominates the storage industry, namely NAND flash memory.

Now we have our hands on Intel’s first more-or-less mainstream SSD for PCs based on 3D XPoint, the Optane SSD 800p. But what’s this? Sequential reads of l,450MB/s? Writes of just 640MB/s? And check out the IOPS, too. Intel rates its new Optane drive at just 250K read IOPS and 140K for writes. Far from being 1,000 times faster than a NAND SSD, all those figures are significantly slower. What’s going on? The short answer is that it’s complicated.

At launch, it’s only available in two configurations: 58GB and 118GB. Launch pricing is $179 for the smaller drive and $289 for the 118GB drive tested here (which formats down to 110GB). Expensive, small and slow, you may be thinking. In many of our benchmarks, the 800p is unremarkable by conventional SSD standards, and a major letdown given the hype that initially accompanied 3D XPoint. Sequential throughput is pretty much in line with Intel’s claims, and thus miles off the fastest NAND-based SSDs.

Granted, Intel has gone with a dual-lane PCI Express interface for the 800p, which puts a cap on peak transfer performance compared to high-end NAND drives with quad-lane interfaces, but that’s clearly not what is holding back the 800p’s sequential write performance, which clocks in at a maximum of 650MB/s in ATTO Disk Benchmark. That’s barely any faster than a SATA SSD.

However, CrystalDisk Mark’s 4K random access metrics hint at the 800p’s greater potential. The 800p registers 229MB/s for reads and 176MB/s for writes. Those figures are much faster than the current gold standard of NAND SSDs – the Samsung 960 Pro — can muster. Broadly speaking, then, the focus for this drive is on low latency and low queue-depth performance, not peak throughput.

Intel says that the 800p is 4-5 times faster to respond at short queue depths of one and two compared to a NAND-based SSD. (It’s at much deeper queue depths of up to 32 where those NAND drives deliver their fastest 4K random access performance.) What’s more, Intel reckons it’s those shorter queue depths that most determine the performance of typical client PC workloads. Intel also says performance is maintained regardless of how full the drive is, and rates the 800p for 365TB of writes, which is incredibly high for such a small drive.

All told, the new Intel Optane SSD 800p is a bit of a mixed bag. This is, very likely, the most responsive mainstream SSD you can buy. It’s also quite possibly the most robust. But it’s not the fastest. 3D XPoint could well still be the future of PC storage, but for now, it feels like a beta technology.

While relatively affordable for an Optane drive, It boasts poor sequential performance. 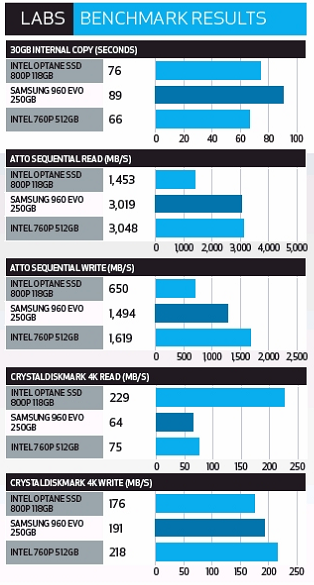