DETAILS: Requirements: SATA-3 for best results, space for a 2.5″ drive

Adata SP600 Review – This particular drive from Adata is at the lower end of what’s available from the company, and it will most likely be phased out within the next six months or so in favor of something else. For the time being, though, it’s readily available and worth considering if you’re not after a top-of-the-range SSD.

The Premier Pro SP600 comes in various capacities from 32GB up to 512GB, but the version we have on test here is the 64GB model. Although not a huge amount of space, it’s enough for a Windows installation and the usual set of office programs and so on. 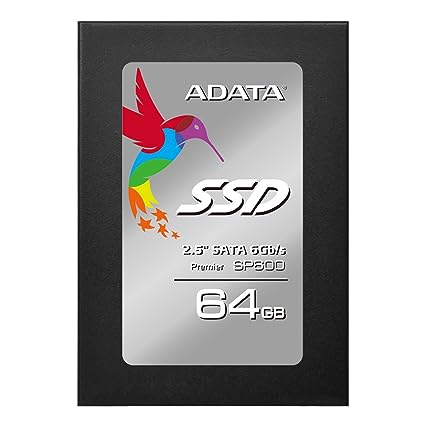 The JMicron JMF661 SATA-3 controller is starting to look its age now, having been released a little over four years ago – an absolute age in technology. But the MLC NAND flash memory is up to scratch, although the throughput from the controller doesn’t really bring out the best that the memory has to offer.

Other features of the Adata Premier Pro SP600 include ECC reco, an MTBF of a million hours, 1500G shock resistance and a reasonably low average power consumption of 0.35W or 0.14W when in a hibernate or sleep mode. Interestingly, Adata has also stated that the maximum operating altitude for the SP600 is 12,000 metres – just in case you ever find yourself seven and a half miles off sea level.

We didn’t really expect something wonderful from the performance benchmarks, since this is just a 64GB pound SSD, but we were quite shocked at how bad the write speeds were. In the ATTO 8192 KB test it reached 566MB/S read and a rather terrible 85MB/S write. Likewise, for the 4KB test the 194MB/S read speed was reasonable, but the 84MB write again was extremely poor. In fact, the write tests barely went above the 85MB/S mark throughout and only dropped to 83MB/S.

Looking at the official specification for the SP600, though, the 85MB/S write was actually an improvement, with Adata stating that the drive has a write speed of up to 70MB/S.

Needless to say, the Adata Premier Pro SP600 isn’t going to lift your PC into the higher end of the benchmark league tables. On the other hand, it’s perfectly adequate many users. Windows will undoubtedly boot quicker and your PC will perform better than if you had a mechanical drive. But if you want better write speeds and certainly more capacity, then you’re better off looking elsewhere.

Unfortunately, it’s only 64GB and not fast when it comes to writes