It has an older LSI SandForce 2281 controller, which has been customized for Kingston and uses the Toshiba-built 19nm Toggle NAND flash. 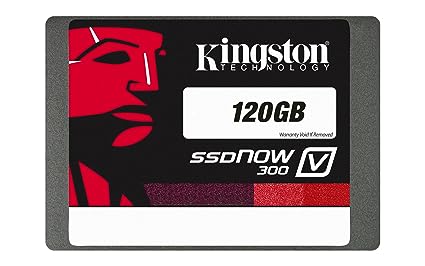 The Sandforce controller may be considered as old technology these days, especially with more advanced Marvell offerings giving us higher capacities at better speeds, but it’s still a pretty effective workhorse. In this case, the drive offers a one million hour MTBF and a three-year Kingston warranty, which is more than enough for most average systems.

The SandForce controller also gets some stick when it comes to performance. In our tests, the Kingston SSDNow V300 managed 556MB/S in the 8192KB sequential read tests and 531MB/S in the same write test. The 4KB tests, where the SandForce technology has often left a lot to be desired, managed 160MB/S reading and 254MB/S writing. The Kingston V300 is pretty fast, then, and will no doubt keep most home users and enthusiasts quite happy.

Kingston advertises this model as a more affordable way to get high-end speeds, with extra testimonials from people from various walks of life and a stark ’10X Faster’ label across the packaging. It’s certainly fast enough for most users’ systems, and it makes for a fine system drive.

Power consumption on this drive is rated at 0.6W when idle, increasing to 1.4W when reading and 2.05W when writing. Considering it’s virtually impossible to tell exactly what an operating is doing most of the time (even when you think it’s solely writing there’s plenty of reading going on), we can guess that the overall maximum power usage is upwards of 2W when in full use.

Having said all that, the Kingston SSDNow V300 still represents an fast and cost effective solution to upgrade from an older hard drive. It’s definitely more than capable of speeding a system up and lessening the power use over time.

The Kingston SSDNow V300 120GB is a good enough SSD for most users. It only costs just £35, and it’s fast enough for desktop users who don’t do too much gaming. However, if you want faster speeds and more capacity, and you’re planning on sticking to the Kingston range of SSDs, then the HyperX 3K models will be the ones for you.