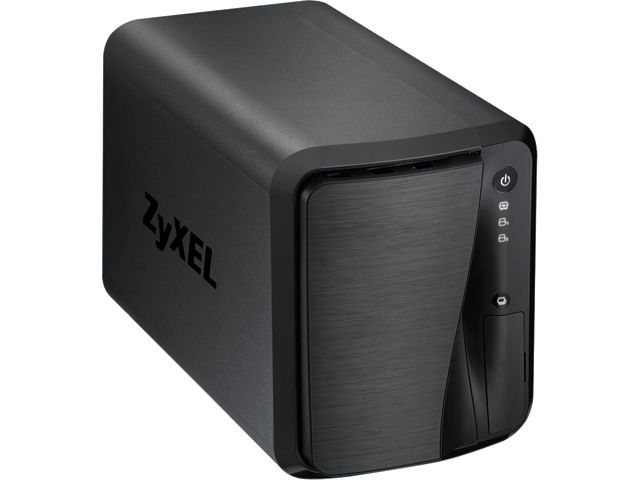 Zyxel is one of those companies that effectively takes a known concept, rendering it into an affordable and accessible solution. And that sums up the Zyxel Personal Cloud (NAS326), for those in the market for a small, cheap, yet powerful dual-drive NAS.

As neither Western Digital nor Seagate made this, it’s sold without pre-installed hard drives, making it perfect for anyone who owns a spare 3.5” SATA drive and needs centrally stored media or backups.

Installation is relatively straightforward. The front fascia slides off, revealing two drive trays, into which you can mount any 3.5” or 2.5” SATA drives, and once there, you can power up the NAS326 and configure the system to your preferences.

With two drives, you’re limited to RAID 0 (stripe), RAID 1 (mirror) or JBOD (just a bunch of drives) arrangements. However, with 10TB drives becoming available, capacity even on a dual-drive system can be huge, depending how much you have to invest in them.

I put two 2TB Western Digital Red drives inside the review hardware, and the system configured them in mirror mode by default. Not long after that, the Personal Cloud appeared on my internal network, featuring public shares for video, music and pictures, and allowing me access to the built-in web interface.

My initial reaction to the Zyxel Personal Cloud interface was positive, because it’s an attractive icon-based model that even those relatively new to NAS should find comforting.

However, when you click on the icons, only some invoke a windowing interface, whereas most spawn a totally new web page, which was obviously designed by someone else who has never put ‘graphical’ on their résumé.

Worst of these sub-pages is for ‘Administrator’ mode, which is reminiscent of the web interfaces that routers suffered from five years or so ago. Many of these controls should be in a graphical ‘Control Panel’, because creating shares or adding users aren’t features you should have to hunt for.

It’s all a bit of a mess, and it looks like it started with good intentions that were abruptly curtailed.

Those who brave the Administrator pages will find that Zyxel has provided plenty of core functionality. Dropbox, Time Machine and iTunes are all supported inherently.

There’s also the merest hint of installable apps in the form of ‘Packages’ that you can install, like WordPress, personal cloud functionality (ownCloud) and a Google Drive client. There aren’t many packages, and some of them require you to preinstall PHPMySQL-phpMyAdmin first, but at least there is some system customisation.

That Zyxel didn’t include more is probably not a bad thing, because the NAS326 only has 512MB of DDR3 RAM. The CPU side of that equation could also be a problem, because the Marvell ARMADA 380 (MV88F6810 ARMv7)1.3GHz processor is single core. Because of this, I’d recommend you don’t load every package Zyxel provided, even if there aren’t that many to choose from.

But in many ways, these things are just a distraction from what the NAS326 does exceptionally well: file serving.
I’ve reviewed many inexpensive NAS options in the past, and none of them have been capable of reliably delivering in excess of 100MB/s both reading and writing over a gigabit network. At this one job, this hardware is stellar and much better than I was anticipating in a RAID 1 pack. Because of that, I’d heartily recommend this to anybody who wants a cheap DLNA, FTP or general file server, but doesn’t fancy paying for Synology hardware.

Where it could be better is in respect of the interface I’ve already mentioned, and also I wasn’t overly impressed with the placement of the USB ports.

There are three USB ports, consisting of two USB 3.0 spec at the back and a single USB 2.0 port on the front. The port on the front is associated with a button that allows you to automatically copy/sync the contents of a USB storage device inserted in any of the ports.

Zyxel should have put one of the USB 3.0 ports on the front, because you don’t want to wait a long time for an upload, and going around the back isn’t convenient.

I’d also like tool-free drive trays, but it’s a job you only do once, so that’s not a major problem.

All in all, Zyxel did a good job on its Personal Cloud product in all the places that are the most important, but it put less effort into the more esoteric features.

It will be interesting to see if it polishes its interface and adapts its thinking as this line evolves, which hopefully it will. Mark Pickavance

A cheap NAS box that is surprisingly fast.