Synology DS116 Review – Excellent DS115 with something even better

Synology follows up the excellent DS115 with something even better

Looking through the specs of the DS116 was a curiously moment for this reviewer. Having just covered Synology’s DS216j, lots of components in it are remarkably similar.

It uses the same processor, a Marvell ARMADA 385 88F6820 dual-core ARM chip, except it runs at 1.8GHz on the DS116, and not the 1GHz of the DS216j. That’s potentially 80% more performance, and because this is a single-drive solution, that power should be more focused. 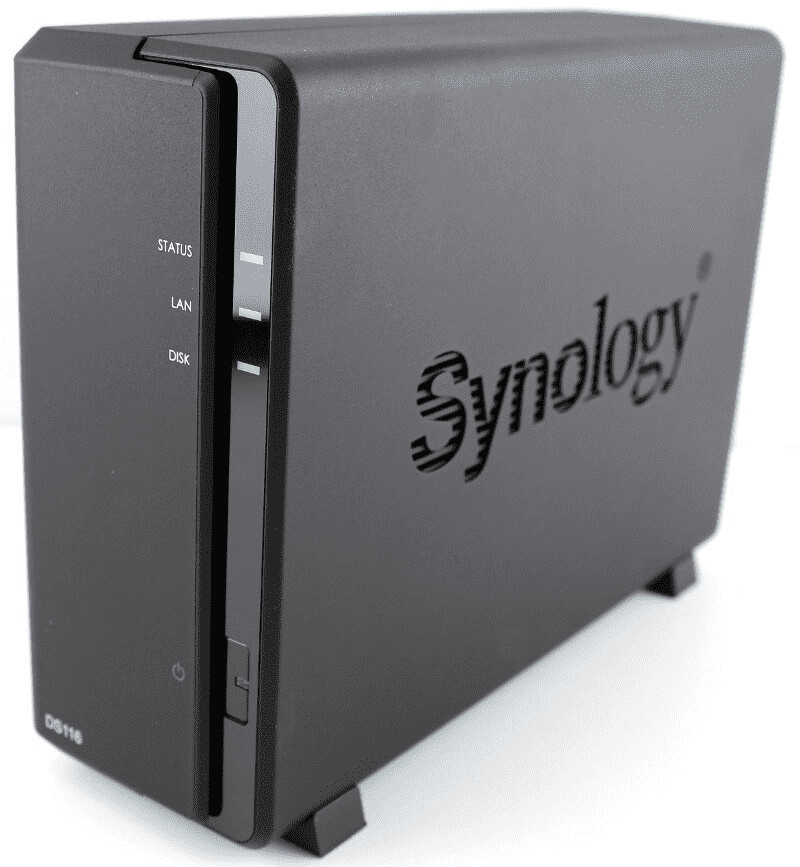 When you combine the higher clocked CPU and 1GB of RAM, as single-drive NAS units go, this is a speedy beast, enabling a wider scope of potential uses.

File serving hits the effective gigabit Ethernet cap on both read and write, at roughly 112MB/s for both, using a single WD Red drive. Using a faster drive won’t gain you anything, because the limiting factor here is the bandwidth available through a single Ethernet cable.

In terms of the applications you can run, the DS116 has the same options as the DS216j, with a total of 76 available, combining Synology’s own with the third-party ones available.

With plenty of power and performance, what’s the problem here? It’s the single drive facility.

While you can hang more storage off the two USB 3.0 ports and back up the installed drive contents to external drives, that’s not the same simple redundancy of a dedicated RAID mirror.

That relegates the DS116 to a role where the data on it is secured elsewhere or isn’t critical or one that’s service based on not storage related.

For home use where you want to distribute personal files about your network, the DS116 is fantastic, assuming you’ve put in place the appropriate backups. Without them, should the drive in the DS116 die, you’ll be left with data loss, and the longer you run NAS hardware, the more likely it is that you’ll eventually run into that scenario.

The alternative is to go for a dual-drive box, with the additional expense of a second drive. However, you won’t get one this powerful at this price.

For comparison, the DS216, and it only runs its processor at 1.3GHz and has just 512MB of RAM. This hardware is closer to the DS216Play in spec, though the DS116 has a noticeably quicker CPU.

A more interesting comparison is with the machine it replaces, the generally well received DS115. That only had an 800MHz processor and 512MB of RAM, making the DS116 a significant upgrade.

The other difference is that the DS115 had two USB ports, only one of which was USB 3.0 spec, and it also had an eSATA port. That’s been rationalized into two USB 3.0 ports, which given the popularity of USB 3.0, is logical.

This all makes the DS116 very punchy by single-drive NAS standards, although I wouldn’t recommend this as a transcoding engine for the likes of Plex, because it just doesn’t have the right silicon for that job.

But for general file serving, personal cloud services, security camera storage and a does other jobs, this is a very worthy piece of kit.