When Western Digital launched its ‘EX’ Expert Series NAS boxes, many wondered why most of the best features went exclusively to the four drive units. The answer, it would seem, is relatively simple: Western Digital’s most important products are hard drives. Therefore, each NAS box sale is an indirect means to potentially selling more drives, either bundled with it or post-sale. 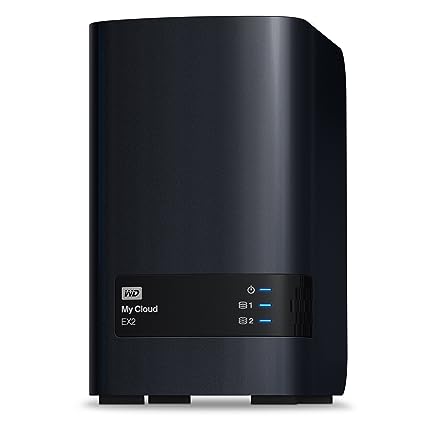 Check Amazon
That said, many small businesses don’t require massive amounts of storage, but they do need something that can spit out files effectively, like the new My Cloud EX2 Ultra. This is listed in Western Digital’s ‘Prosumers/Creative

Professionals’ range, positioned as the smaller brother to the My Cloud EX4100. However, from the outside it uses the same My Book styled exterior that was used in the original EX and EX2 designs.

With the possible exception of the ‘Ultra’ label, the two almost impossible to separate visually. There still isn’t a front facing USB port or a power button, for example – despite numerous reviewers complaining about these omissions before.

While those issues aren’t addressed here, the EX2 Ultra has some enhancements over the EX2 that are definitely worth having. At its heart this NAS box has Marvell’s ARMADA 385 dual core 1,3GHz processor in its corner, working alongside 1GB of DDR3 RAM. That’s a minor clock bump, an ARM processor with a dual core Cortex-A9 design (as opposed to the previous single core model) and double the RAM compared with the stock EX2. That’s still less grunt that the EX4100 (which has a more powerful CPU and more memory), but places the Ultra neatly between that and its direct predecessor.

With still only two drives to control, the Ultra is therefore better suited to running installed apps on My Cloud OS 3, and also attaching more additional storage through USB 3.0. So what you’re really buying here are future possibilities, with the assumption you’ll never need the EX4100 levels of capacity and performance.

You can buy the EX2 Ultra in either a diskless configuration, or with 4TB, 8TB, 12TB or 16TB in a pair of pre-installed WD Red NAS drives. That enables you to run the system in RAIDs 0 or 1, JBOD or Spanned, subject to your priorities. So, depending on how important the data is on the system, you could either go for for the maximum amount of avaiable space or opt for redundancy, but only having two drives precludes prioritising both.

What the EX2 Ultra does deliver is raw speed. It’s performance effectively maxed-out gigabit Ethernet for reading – at about 112MB/s – and hit well over 100МВ/s for writing. That’s servicing an optimal file size and a single user, but for a small server there is clearly more than enough horsepower in the Ultra to handle file serving duties. The obvious use for that extra power is installable apps, but that is where Western Digital isn’t competing with the likes of Synology as much as its customers would like.

By default four apps are pre-loaded, but there are just 14 other tools you can add, including WordPress, Plex, Joomla, phpBB, Dropbox and Acronis Truelmage. I reviewed the original My Cloud EX2 nearly two years ago, and commented that the app selection needed to be expanded. The very modest increase we’ve seen since rather undermines Western Digital’s ambitions in this sector, even if its hardware has been good and competitively priced.

Where things are much better is in respect of the branded software tools that you can download to use in conjunction with the My Cloud OS, like WD SmartWare and WD Sync. These are really powerful, and useful.

The EX2 Ultra is a much more agile beast than the EX2 it replaces, providing both a boost in performance and responsiveness. Many users don’t need more than a dual drive configuration, and with 8TB drives available now, it may be that four drive units are less of a necessity.

Looking at the pricing, buying the EX2 Ultra pre-installed is a much better choice, unless you’ve got a bunch of spare NAS-designed hard drives.

What I should also mention is that while a bare box start is more expensive, it would give you the option to use 1TB, 3TB and 5TB drives. These aren’t offered pre-installed by WD – nor is the option to start with just a single drive and add another later.

That’s plenty of choice in a single product, and if Western Digital could only commit more resources to the software side of the NAS range, they might be even more desirable. Mark Pickavance

Another affordable performer for SOHO NAS buyers to consider..