A versatile high-end NAS for the home or small office says Lindsay Handmer. And who are we to disagree? 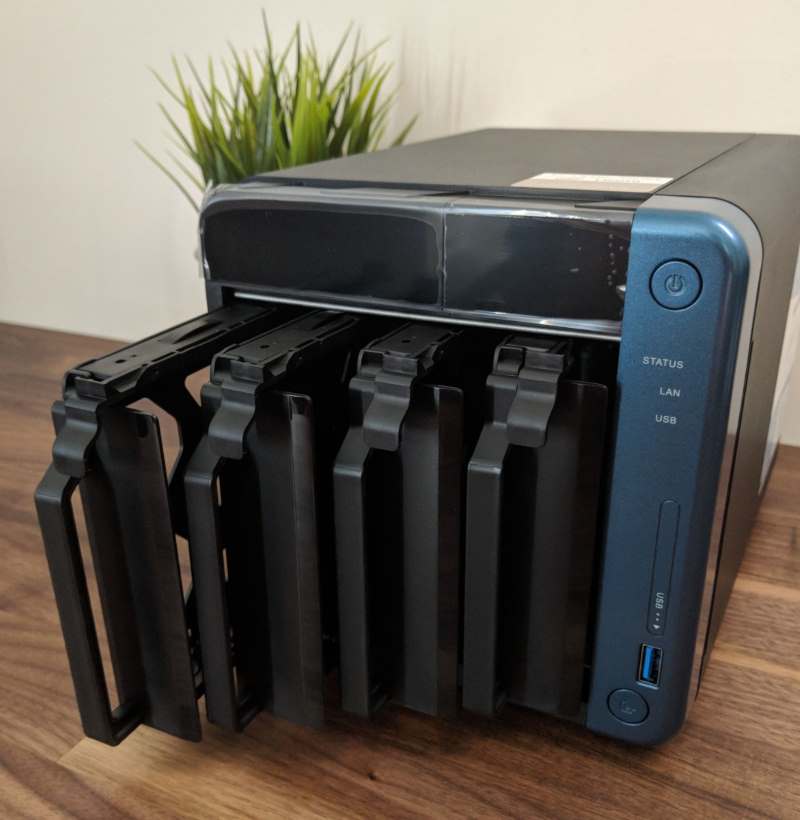 NAP’s new TS-453Be is a home and small office focused four-bay NAS box which focuses on offering great multimedia functionality. It also provides a PCIe expansion slot that enables you to install a range of upgrades.

The 453Be is essentially the 2018 update to the excellent (albeit expensive) TS-453B. This newer version has slightly reduced specifications and fewer included accessories, but it’s also a lot more budget conscious.

The aforementioned PCIe slot, which supports a range of upgrade cards, such as single and dual-port 10GbE, dual M.2 SSD expansion. USB 3.1 and an 802.11ac WiFi card. It’s an important feature, because with quality hard drives a NAS can be reasonably expected to give five or more years of service without becoming unacceptably out of date.

The TS-453Be can handle up to 8GB of DDR3L RAM across two slots, and is sold with either 2GB of 4GB pre-installed. Adding in RAM is easy – just remove the hard drive caddies and the RAM slots are exposed underneath, meaning there’s no need to even unscrew anything.

With tool-less drive bays and an easy-to-use setup wizard, getting the TS-453Be connected and configured is super easy. Once up and running, the OS interface is generally clean and simple to navigate, although some of the more in-depth features can take a little digging to find.

Like most higher-end NAS devices, the TS-453Be can run virtual machines. It supports Linux, Windows. Unix and Android machines – making it easy to run almost any software you desire on the NAS, or experiment with different operating systems to find the one that best suits your needs. You’ll likely want to upgrade the onboard memory if you do play with these features.

Qnap has also launched a new surveillance solution, QVR Pro. for monitoring your home or office. It supports most existing IP cameras and some USB webcams. The ability to connect up to four cameras is included for free, but you need to pay on a per-device basis beyond this.

There are extensive media capabilities here through DLNA streaming and a Kodi-based add-on. which can be controlled via an additional remote control and played through the two HDMI outputs. The Intel Celeron can handle transcoding up to 4K resolutions.

We tested the TS-453Be equipped with 4GB of RAM. using four Seagate Iron Wolf Pro hard drives set up in RAID 1. Our review unit didn’t include any expansion cards, so was tested on a regular 1GbE network. While we have tested NAS boxes that have managed to eke out a tiny bit more performance, the 112.3MB/S read and 109.2MB/S write speeds are entirely on par. Qnap quotes dual 10GbE speeds of 659MB/S read and 648MB/S read, if your drives are fast enough.

The NAS does a reasonable job of containing hard drive noise, and the 120mm exhaust fan is unobtrusive when running. The unit does come with a fairly large external power brick though, which can be hard to tuck away out of sight.

The compact TS-453Be is perfect for home users craving multimedia NAS functionality, but it can also be expanded with a variety of add-in PCIe cards for improved performance and future proofing.