Any Ubuntu-based distro has to pull something special to get into the good books of Mayank Sharma. Has he found a unicorn, or a one-trick pony?

Pitched as a distribution for first-time Linux users, Zorin OS is designed to appeal to those coming from popular proprietary OSes, namely Windows and macOS. In addition to the freely available Core edition reviewed here, the project also produces several variants such as Lite, Education and Ultimate that are available for a one-off fee.

We’ve seen the likes of Zorin OS before, in Pinguy OS and elementary OS. These are distros with tweaked desktops that take advantage of their Ubuntu base to ease new users into the Linux desktop. Zorin does the exact same thing, but the way it goes about it is what sets it apart from others.

The newest v15 release is based on the latest update of the Ubuntu 18.04 LTS release. The distro’s goal is to package the goodness offered by Ubuntu into a system that’s made accessible thanks to its “familiar interface”. For this the developers have mutated the Gnome 3 desktop to sport a single panel along the bottom of the screen, which is very reminiscent of Windows’ taskbar. It completes the look with a traditional Applications menu on the left, followed by a few app launchers, the taskbar area, a system tray and a notification area on the other end. Even the layout and behaviour of the custom Applications menu is Zorin’s attempt to ape the proprietary OS.

Previously we’ve praised Zorin for mimicking other OSes via its layout-switching app that shape-shifts the desktop. It’s now called Zorin Appearance and in the Core edition only really offers a touch-friendly alternative to the default layout, which in essence replaces the Applications menu with the Gnome 3 All Applications view. There is another layout called Windows Classic, which is just a slight tweak of the default layout in that it doesn’t group open apps in the panel – and that’s about it.

We can understand why the developers would want to restrict the macOS-lookalike layout to the paid-for Ultimate Edition. But it makes no sense not to make the standard Gnome 3 and the Ubuntu layouts available: would you really want to pay for these layouts when you can get them for free elsewhere? Oh. and in case you are looking for the Gnome Activities Overview, it’s tucked into the Application menu, which makes the omission of the standard layouts seem even more bizarre.

The Zorin Appearance app can do several other tricks besides switching layouts. One touted highlight is its ability to automatically adapt the background to the time of the day, a fancy way of saying it switches between light and a dark theme. You will find a good number of customisation options in the app to tweak the behaviour and look of the various elements in the Zorin panel.

Another highlight is the Zorin Connect app that builds 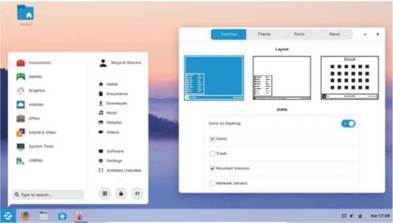 You get Flatpak support with Zorin 15 Core, along with the snap support that was added in the previous release.

on the work of GSConnect and KDE Connect to wirelessly meld mobile devices with computers, in order to share content such as notifications, files and more. Zorin has a leg-up on its peers here since it is the only one that currently includes this functionality with the default install.

There’s not much to write home about with the apps bundled with the Core edition – it’s got everything you’d expect from a desktop distro. In what we feel is the distro’s attempt to nudge more Windows expats towards its paid editions, Zorin has removed Wine and its PlayOnLinux frontend that were some of the highlights of the previous Core releases. Even the freely available Steam client is missing from the Games menu of the Core edition, which is a real shame.

All things considered, the pre-installed Zorin Connect is the only real pull that this distro has to lure first-timers away from the competition. People coming for familiarity and continuity in user experience will still be better served with the paid editions, and Core does its job of convincing them to reach for their wallets.

Manages to walk the fine line between offering a free edition along with paid ones without compromising either.