Mayank Sharma isn’t too gullible in real life, but has an uncanny tendency to fall for distros that then don’t deliver on the claims they make.

A customised Ubuntu-based distro that ships with multiple desktop environments. It pitches itself to users who want to migrate away from Windows by helping them roll their existing Windows XP, 7 and 10 installations into a virtual machine. Another highlight is its one-click installers for popular apps, to help shield the app installation process from new Linux users.

Never one to judge a book by its cover, we let slide the fact that Robolinux’s website is very messy and a nightmare to navigate. Sure, we appreciate the fact that donations are key to sustaining the open source ecosystem, but we think this project goes a little overboard. Its developer’s heart is in the right place; he isn’t just seeking donations for himself, but that’s no excuse for the poorly designed website.

Robolinux has three active branches: Raptor 8, based on Debian; Raptor 9, based on Ubuntu LTS; and Raptor 10, based on Ubuntu. Each branch has a bunch of releases for different desktop environments, including Cinnamon, GNOME, Xfce, MATE and LXDE, for a total of 15 ISO images. Once you do manage to navigate your way to the downloads page, you find that they’re actually hosted on SourceForge.

The ISOs are hefty compared to other distros, ranging between 2-4GB. There’s obviously no shortage of pre-installed apps and you can get more using the distro’s unique one-click installers. When we last looked at the distro in LXF227, the project was charging $10 (about £8) for them. Unless you shelled out the money, you couldn’t install any of these apps. That’s changed now and you can grab the installers from the project’s website. The apps are essentially just shell scripts that use apt to get the apps.

We have two issues with Robolinux’s approach. The first is that while they do just take a single click to install, it takes dozens to grab the scripts from the project’s website. Secondly, the project does a disservice to the open source community by claiming the scripts will help save users several hours spent resolving dependencies if they were installing the apps manually. They don’t make any mention of dependency-resolution binary package management tools like apt, which is what they themselves use in the scripts.

Then there’s the other highlighted feature of the Robolinux project, dubbed Stealth VM. Together with another script descriptively named C-Drive-to-VM, this helps you move your physical Windows installation into a virtual machine. Again, both scripts were available only after the payment of a small fee, but are now available for no cost. Peer under the covers and the process is pretty much the standard affair. C-Drive-to-VM gives you a couple of freeware utilities to resize your Windows partition and fold it into a VHD file. After moving the VHD file to your Linux installation, use Stealth VM to first convert it into VDI and then import into a VirtualBox VM. 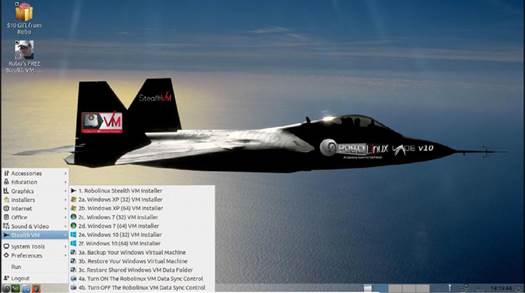 The project’s poor taste in user interface design extends from the website to the desktop, with gaudy wallpaper and silly desktop icons.

We aren’t fans of the project shielding this information from its users and projecting it as a novel approach.

The distro also appeals to privacy-conscious users by inviting them to use a script to route all its traffic via a VPN, which is also Robolinux’s third distinguishing feature. This too is a disappointment as the service it relies on requires users to have a paid account, which is a fact that is conveniently missing from Robolinux’s website. Once again, we aren’t against paying for a service, but it’s the project’s lack of clarity that upsets us.

Lastly, for a distro that targets new users Robolinux doesn’t have a public forum board. Instead guaranteed support is doled out by the developer himself – for a fee. There is an option to email your tech support queries for free, but that’s no excuse for not hosting public forum boards. The amount of documentation on the project’s website is also negligible and isn’t properly arranged inside a dedicated menu, which make it hard to access.

Sure, projects need to sustain themselves – but the tactics employed by Robolinux not only make it look shady but also reflect poorly on the larger open source community as a whole.

Robolinux is one of the shadiest distros we've seen in a while. There really isn't anything to see here..