Samsung created a splash last year with its 950 Pro SSDs. Using the latest NVMe protocol over PCI-E 3, they brought unprecedented performance for the money. Thanks to the tiny M.2 form factor, they could also bring that performance to desktops and laptops alike.

A year later, the 950 Pro range still reigns supreme, but Samsung hasn’t rested on its laurels – it’s just announced a new line of high-performance NVMe M.2 SSDs – the 960 Pro and 960 Evo, boasting sequential read speeds that are up to 1,000MB/sec faster than those of the 950 Pro drives. 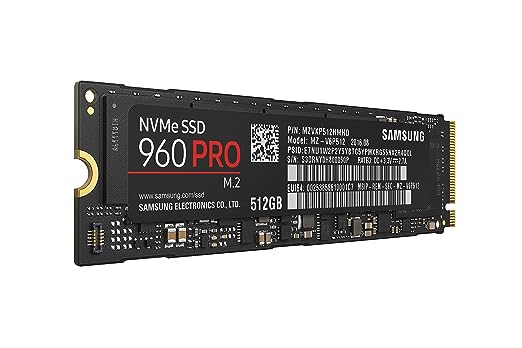 The flagship Pro model now comes in capacities up to 2TB, marking a four-fold increase over the maximum capacity of the 950 Pro range. There will also be 512CB and 1TB models available, so the entry-level capacity for the Pro range is now doubled. However, as a result, the lowest price you’ll be able to pay for a 960 Pro drive is S369 US (UK pricing hasn’t been revealed yet), which is some S169 more than previously. This price rises to S629 for the 1TB version and a whopping S1.299 for the 2TB drive.

Nonetheless, for that extra cash you get a big leap in performance. Sequential read and write speeds are rated at 3,500MB/sec and 2,100MB/sec respectively for the 2TB version, which is 1,000MB/sec and 600MB/sec faster than the maximum speeds of the 950 Pro range. Meanwhile, random lOPs have also jumped from 300K to 440K (read) and from 110K to 360K (write).

What you don’t get, though, is the longevity of the older drives. While the 950 Pro had a class-leading ten-year warranty, the 960 Pro’s warranty drops to just five years, which is quite disappointing for the price of these drives. That said, overall endurance hasn’t dropped. Samsung still claims a maximum terabytes written (TBW) of 400TB, 800TB and 12PB (petabytes) for the three capacities. It’s just that you won’t be covered if you experience an unexpected failure after five years.

The 960 Evo range replaces the 850 Evo M.2 series, which was limited to using the slower SATA interface despite its M.2 form factor. As such, it’s less of a surprise to see large gains in performance for the 960 Evo as it moves to a PCI-E interface, but the numbers are impressive nonetheless.

That potentially makes the 512CB version a sweet spot for enthusiasts looking to make a big leap in performance and capacity from an older 128GB or 256GB drive – you’ll effectively be getting the performance of last year’s flagship 950 Pro for about S100 less.

On the downside, there’s only three years of warranty cover, although the endurance is still pretty solid; maximum TBW has increased from 150TBW to 400TBW over the 850 Evo M2 drives.

Both the 960 Pro and Evo are based on Samsung’s current 48-layer V-NAND tech, which stacks 48 layers per die, with each package consisting of up to 16 256Gb dies stacked on top of each other for a total of 512 GB per package. The Pro series uses four packages while the Evo line has just two, hence the difference in capacities.

The big difference between the Pro and Evo drives, though, is that the Pro uses 2-bit (MLC) N AND while the Evo uses 3-bit (TLC) N AND. This means that, as well as greater longevity, the Pro can maintain its claimed write performance until the drive is full. In contrast, the Evo range comes with the usual caveat for TLC drives – after a certain point write speed will drop from those headline figures.

That’s because TLC NAND is inherently slow for writes, so TLC drives dynamically convert a portion of the NAND to run in an SLC mode, which is much faster for writing operations. Once that SLC is filled up, though, performance drops back to TLC levels until the drive has a chance to move that data from SLC to TLC.

Samsung calls this SLC buffer TurboWrite, with the 960 Evo drives using a new version dubbed Intelligent TurboWrite. Samsung has remained tight-lipped about what makes it intelligent but we do know that the size of the SLC has increased significantly compared with the 850 Evo. While the 850 Evo TurboWrite ranged from 3GB to 12GB, the 960 Evo goes from 13GB to 42GB.

It’s all managed by Samsung’s latest drive controller, Polaris. Samsung has revealed few details about the new controller except that it’s largely the same as previous Samsung controllers but now includes five cores rather than the three of the 950 Pro.

The company also revealed that one of these cores is dedicated to optimising communication between the PC’s host adapter and the drive’s controller. Part of the reason for this optimisation is likely to be that the Pro drives come close to maximising the 4,000MB/sec throughput that can be achieved over the 4x PCI-E 3 connection they use.

To achieve the high capacities, Samsung also had to stack the Pro drives’ LPDDR4 DRAM on top of the controller to make room for more NAND packages.

What’s more, to keep temperatures in check, Samsung had to add a copper layer to the sticker that covers the chips. This tiny amount of extra heat dissipation, combined with the drive’s latest Dynamic Thermal Guard firmware, enables Samsung to keep the drive running at full tilt for a little longer before the firmware throttles performance.

Joining these two new drives is a new version of Samsung’s Magician software. Along with an updated interface, it includes a few new features that will initially only be available on the new drives. First is a Secure File Erase feature, which adds the ability to securely erase individual files, as an alternative to the existing full-drive erase option. This makes it more convenient to destroy sensitive data without needing to reinstall all their software.

The second feature is Magic Vault, which lets you allocate a portion of the drive to be completely invisible to the OS so it can be used to store sensitive files. It can only be accessed with a password via the Magician software. Third is a system compatibility tab, which will report potential issues with the drive relative to your PC’s other hardware. These three additions are joined by the existing features of Magician, which are a full-drive secure erase, firmware updates, performance benchmarks and a drive-health indicator.

We had hoped to feature the 960 Pro drives as a review in this issue, but Samsung changed its review sampling and embargo times to the point where we couldn’t test before going to print. Look out for a full review in next month’s issue.

Samsung is in a unique position when it comes to building today’s high-speed Solid-State Drives, also known as SSDs. It’s one of the only companies who builds every component within its SSDs. from the drive controller, to the flash memory, to the PCB these pieces are mounted on. This helps to give Samsung the ability to extract every ounce of performance out of its products, and has helped establish Samsung SSDs as a premiere drive. The new release of the Samsung 960 PRO and EVO helps extend that lead, delivering outstanding performance designed to give gamers and performance users a superb experience.. Both of these new products use the latest version of Samsung’s revolutionary V-NAND memory, which allows them to stack large amounts of memory into a small package. Because of this, the new 960 PRO is available up to a whopping 2TB in capacity, while the EVO maxes out at a still impressive 1TB, more than enough for large gaming collections. Yet both drives still use the tiny M.2 2280 form factor, which is designed to take up a small amount of space in your case. Most new motherboard from the last two years includes an M.2 port, so you shouldn’t need to upgrade your motherboard if it’s relatively new. Both products are built to help utilise the extreme bandwidth offered by PCIe 3.0 over four lanes, also known as PCIe 3.0 x4, combined with the latest Samsung NVMe technology.

The 960 PRO can hit a sequential read speed of up to 3500MB/sec, while sequential write performance is up to 2100MB/sec, up to 40% faster than the last generation of Samsung SSDs. It’s also a speed-demon when it comes to random file performance, with a random read IOPs of up to 440,000 and write IOPs of up to 360,000*.

The 960 EVO is no slouch either, hitting a sequential read speed of up to 3200MB/sec, and sequential write of up to 1900MB/sec. Random read speeds max out at380,000 IOPs. while write speeds hits the same speeds as the PRO. at up to 360,000 IOPs*. These big numbers are lovely, but what do they mean to gamers? For starters, your games should load in the blink of an eye. They are also designed to decrease level load times, allowing you to quickly enter the server.

Finally, overall desktop performance is designed to be more responsive, with the ability to load applications and large files in an extremely short amount of time. It’s hard to understate just how fast the new Samsung 960 PRO and EVO drives are. If you’re looking for the fastest Samsung SSD on the market at the moment, look no further. In a review in PC & Tech Authority, Editor Ben Mansill said both drives deliver “…a new paradigm in consumer PC storage performance”.