Let’s be real: Solid-state drives aren’t exactly known for their stunning visual flair. Best-case scenario, the SSD you buy has a decent enough aluminum housing and a product sticker that looks like it was designed in Photoshop rather than MS Paint. After all, there’s a reason nobody squawks about SSD drive bays on the reverse side of a case’s motherboard tray. 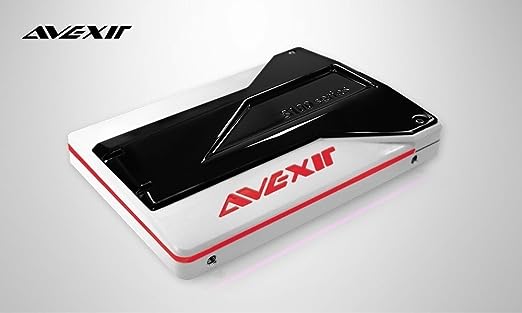 Finally, AVEXIR has given us a reason to put our SSDs on display. The S100 is the world’s first family of solid-state drives to leave the factory with built-in LED lighting. This should come as no great surprise for any enthusiast who’s either used the company’s dazzling DRAM or has kept tabs on its wares. Many of AVEXIR’s memory modules include LED lighting with wicked-cool effects, making them an incredibly popular option for any build with a side panel window.

The same concept is the S100’s hook. AVEXIR’s logo on the top of the drive and a stripe that wraps around three sides of the drive are LED-lit. (The S100 that AVEXIR sent us had blue LEDs.) When active, the LEDs have a breathing effect, similar to what you’ll see on AVEXIR’s Core series memory modules (or on a lot of LEDbacklit keyboards, if you’re not familiar with AVEXIR’s Core memory). That’s all you’ll get from the inaugural model as far as effects go, but it’s nonetheless heads and shoulders above the competition in the aesthetics department. In addition to capacities of 120GB and 480GB, AVEXIR also gives buyers the choice of four other colors of LED lighting—red, white, green, or orange.

Packing the S100 with LED lighting and bolting on the sculpted top panel (which, by the way, adds even more visual appeal) gives the SSD a little more bulk than a standard 2.5-inch drive. With a height of 14mm, the S100 is too thick for anything other than a desktop computer, but this is the silliest disclaimer we’ve ever had to issue. Seriously, anyone who buys an LED-lit SSD only to hide it in a laptop needs a cranial exam.

Now, an SSD needs to do more than just pose for the cameras, so how do its reads and writes stack up? On most disk operations, the S100 matches other 6Gbps SATA SSDs stride for stride. Sequential reads and singlethreaded 4K operations are particularly good.

The 240GB S100 isn’t the cheapest solid-state drive on the market, but that sweet LED glow ain’t free, people. Anyone who wants their SSD to look thoroughly modded without actually doing the dirty work needs to get one of these drives.