Time to ditch your hard drive?

Solid-state drives (SSDs), which store data on flash memory chips, will never be as cheap (per GB) as hard drives, but they’re now cheap enough to be worth considering. If you’re thinking of adding one to an existing system, they come in a format that fits both desktop PCs and laptops (note: many laptops have no room for an SSD). Standard SSDs come with two kinds of interface: SATA, used for hard drives; and the faster M.2 connector, which gives you the benefit of the fastest SSDs.

A budget SSD with room to spare – but slower than rivals.

Kingston’s UV400 uses SATA 3.0 and configures a small part of its capacity (around 8GB) in a way that boosts write speeds. And you get 447GB of usable space. That’s not bad. The normal way to use it would be to install Windows 10 and all your apps on this drive, along with any files you use regularly and/or need to access at top speed, and keep the rest of your stuff on a larger hard drive. 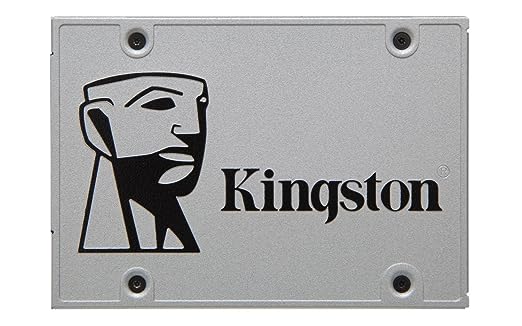 Not that it matters much, but the UV400’s case looks reassuringly tidy, with a sandblasted metal finish. It’s also available in a bundle with a SATA cable and 3.5in adapter plate for mounting in a PC, plus a basic USB enclosure that you can use to connect the drive to a laptop to transfer data from your existing drive before installing the UV400 (in this case, you’ll be replacing a drive rather than installing a second one).

In our testing, the drive was quick to write small files but with larger files it dropped to around 90Mbit/s, less than a third of the speed you’d expect from a mid-range SSD. That’s not as bad as it sounds because the UV400 will still feel very fast compared to a conventional hard drive. Samsung’s 850 Evo 500GBoutperformed this and other mid-range drives in our tests, writing at 500Mbit/s, and remains our top choice. However, the UV400 undercuts it by quite a significant margin.

A good big-brand SSD for a bit less than rivals, but look elsewhere if you want top performance

It may be a couple of years old, but at this price its still excellent, value

A good big-brand SSD for a bit less than rivals, but look elsewhere if you want top performance.