For many, the Core i5-7640X is a chip to be toyed with out of curiosity but isn’t really a purchasing choice made for an optimised solution.

It’s common for PC enthusiasts to own multiple graphics cards during the lifecycle of a custom DIY desktop PC, especially when the central usage focus is gaming. Essentially, a system spec is built as a ‘set and forget’ solution, with the GPU and perhaps storage being revisited as an interim upgrade. This is where Intel’s marketing of the X299 platform as a scalable solution, while a valid point technically, becomes a soft notion in reality. The reason being, upgrading from the Core i5-7640X to even the entry-level Core i9, the i9-7900X, demonstrates a price differential. Frankly, someone looking to spec a CPU is unlikely to consider the CPU upgrade path unless there are extenuating circumstances preceding the purchase of a Core i5-7640X over, for example, the Core i7-7800X.

Additionally, due to the comparatively small direct- to-CPU PCIe lane allocation of 16 lanes and support for only dual channel RAM, many of the features of a X299 motherboard simply go unused.

The move from X99 to X299 has delivered more PCIe bandwidth from the PCH, with X299 sporting 24 x PCIe 3.0 lanes opposed to X99’s eight PCIe 2.0 lanes. This is a welcomed update for the HEDT platform overall; however, there’s still a resource allocation draught for direct-to-CPU PCIe paths when using Kaby Lake-X CPUs.

Beyond the obvious move from the Kaby Lake-S LGA 1151 socket to Kaby Lake-X LGA 2066 socket, the repackaged Kaby Lake- derived solutions feature increased base clock frequencies. The Core i5-7640X has received a 200MHz bump, upping the base frequency from 3.8GHz to 4.0GHz, while retaining the same 4.2GHz boost clock frequency.

Processor TDP is also increased, from 91W to 112W, though this is essentially a result of increased overclocking capability as facilitated by the increased power delivery afforded by the move from LGA 1151 to LGA 2066 and the X299 boards having strong motherboard VRM for high core-count CPUs. This has made the Kaby Lake-X solutions popular with overclockers, as the units compete directly with the Kaby Lake-S parts. By moving Kaby Lake to x299, the CPUs have been returning 24/7 overclocks 100-400 MHz higher than what’s possible on the Kaby Lake-S parts.

If you love to overclock, this solution makes plenty of sense. For everyone else, think long and hard about your usage case alongside system needs and wants before making a purchase.

A capable CPU in its own right, but when compared to the rest of the market, it’s mostly just an expensive enthusiast toy. 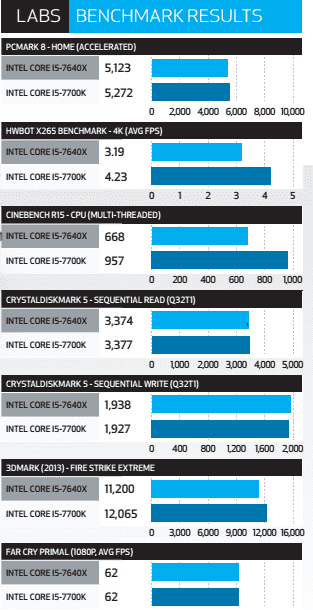