WE’LL PREFACE THIS review by saying the Apple HomePod isn’t for everyone. As good as it is at playing music, and as cool as it is at being able to perform a variety of functions using voice commands — both of which we’ll cover in more detail later — its various limitations mean that even Apple die-hards with deep pockets may want to think twice. 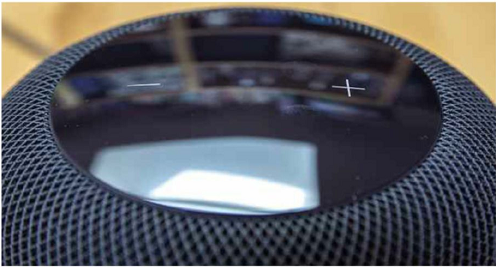 When it comes to smarts, the HomePod has both pluses and minuses

As with the Apple Watch and AirPods, the HomePod is designed for iOS devices only. Even MacBook and iMac users are locked out, as you’ll need an iPhone or iPad to set the HomePod up in the first instance. Technically, you could borrow someone else’s device to do this, but that also means you’ll be locked into using their Apple account, which is tied to their Notes, Contacts, Reminders and Apple Music subscription. 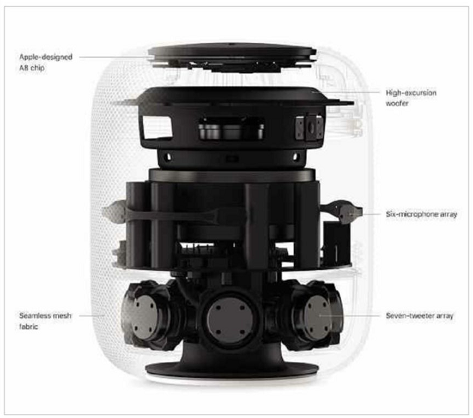 The latter is the clincher. Given you can’t stream Apple Music on more than one device at a time — and anything you do stream will affect the account’s music preferences, even your closest buddy may have a problem with lending you their device for this purpose. 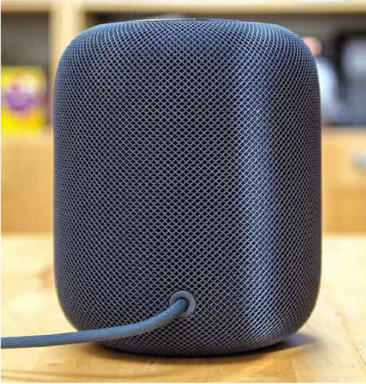 There are no extra outputs, but with quality like this there’s no need

The HomePod is also highly restricted in what you can do with it. There are really only two choices: you can play music directly through the speaker using an Apple Music subscription (which will set you back $11.99 a month, $119 a year); or you can stream any music that’s currently playing on an Apple device (including MacBooks and iMacs) via Apple’s proprietary multimedia streaming tech AirPlay, which includes your own music collection and other streaming services such as Spotify, Google Play Music and YouTube. But only the Apple Music option supports voice control; if you’re streaming music via AirPlay from an external device, you’re stuck with the on-screen controls in that app.

Either way, you have to have an Apple device or service to use the HomePod.

The lack of auxiliary input means you can’t connect an external music player (such as a TV, laptop or smartphone) with an audio cable. Nor is there a Bluetooth option. However, there is a third option that isn’t well-documented. If you have an Apple TV

that’s third generation or above, you can set the HomePod as its speaker by configuring it up in the Apple TV’s settings, effectively turning it into a TV soundbar. Of course, you’ll have to go back in and deselect it whenever you want to use your HomePod for other things, and this is a bit of a pain as it’s a multi-screen process, but at least the option’s there for squeezing a little more use out of it. 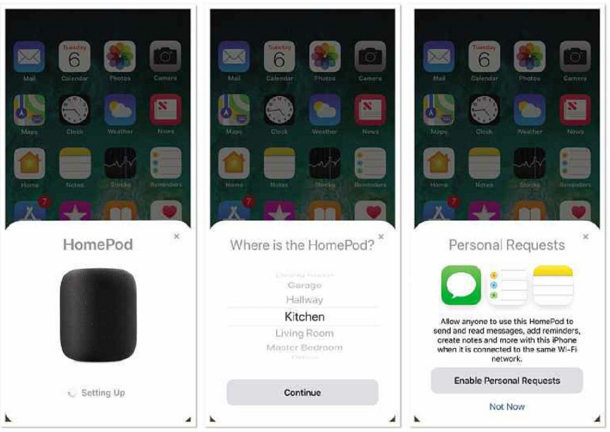 Setting up the HomePod is as easy as you might expect

The HomePod really comes into its own when paired with an Apple Music sub, as it can learn your music preferences and act as your personal DJ. As well as the usual requests specifying song name, artist name or genre, you can say something like “Play one of my favourite songs”, and it’ll dig up something from a mix that’s automatically generated from tracks you play regularly. Another cool voice command is “Play something I’ll like”, which throws out tracks that you haven’t heard before but are likely to enjoy based on previous tracks played.

This is all well and good if you’re already using Apple Music, but if you’re firmly entrenched with Spotify, then you may not want to make the switch and lose all of the playlists and recommendations you’ve built up over the course of using the service. This is a serious sticking point, as the HomePod loses much of its allure if you can’t use your voice to control music playback.

If you happen to fall within the small niche of users who won’t be phased by these limitations, the good news is that it’s an outstanding audio speaker that looks a lot nicer in person that it does in pictures. Apple has marketed the HomePod as a speaker first, and smart hub second. As such, it’s packed to the brim with enough audio components to make other speakers its size cringe with embarrassment. As a result, while the HomePod is relatively compact, easily fitting on a bedside table, desktop or bookshelf, it’s far heavier than you’d expect at a hefty 2.5kg.

A unique array of seven beam-forming tweeters — each with their own amplifier and transducer — produces a remarkably wide soundstage. The built-in spatial awareness tech automatically optimises the audio output based on the speaker’s location in the room (ie, whether it’s against a wall or not), and it’s also clever enough to equalise the sound levels based on the song it’s currently playing.

If you’re upgrading from a portable Bluetooth speaker, the HomePod’s audio quality will be a revelation for your eardrums. The bass reproduction is tightly controlled, but boomy enough to pull off bottom-heavy tracks with gusto. We’re not talking Beats-level bass here, but the

HomePod opts for a more accurate sound over emphasising the lower registers. In fact, all of the frequencies are reproduced equally well with exceptional clarity.

As a ‘smart assistant’, on the other hand, the HomePod has some serious catching up to do. While it can perform most of the functions available on an iOS device using Siri, there are notable exceptions. Initiating calls and checking your calendar, for instance, have been arbitrarily left off the feature list. The functions that are on offer are very much limited to your own data or information that’s publicly available on the internet — tapping into third-party services like you can with the Amazon Echo isn’t possible.

One thing Siri does better than competing voice assistant technologies, however, is understanding context. This means you can follow up a voice command with another, related command that builds off the previous request. If you ask for the weather forecast tomorrow, for instance, you can follow this question up with “What about at 5pm?” and it will understand that you’re still asking about the weather.

Apple has always been good about locking users into its own ecosystem of products and services, but the HomePod feels like it’s gone too far. At the very least, an auxiliary input would’ve made us feel better about the steep asking price, as it would’ve opened it up to more uses. In the past, Apple has justified its walled garden approach by claiming it came down to security risks, but this isn’t a valid argument when it comes to analogue audio inputs. Further, tying people into using Apple Music feels like yet another instance of the technology juggernaut throwing its weight around.

There’s no denying that the HomePod produces sensational sound quality — it’s just hindered by too many limitations to justify the expense. Apple usually needs a few attempts to iterate its tech and make a product right for the mass market — the HomePod is no different.