Control your kit, hear your tunes and have a nice conversation too. But which one should you choose? T3 rates the best smart home speaker, so you can upgrade your home with ease… 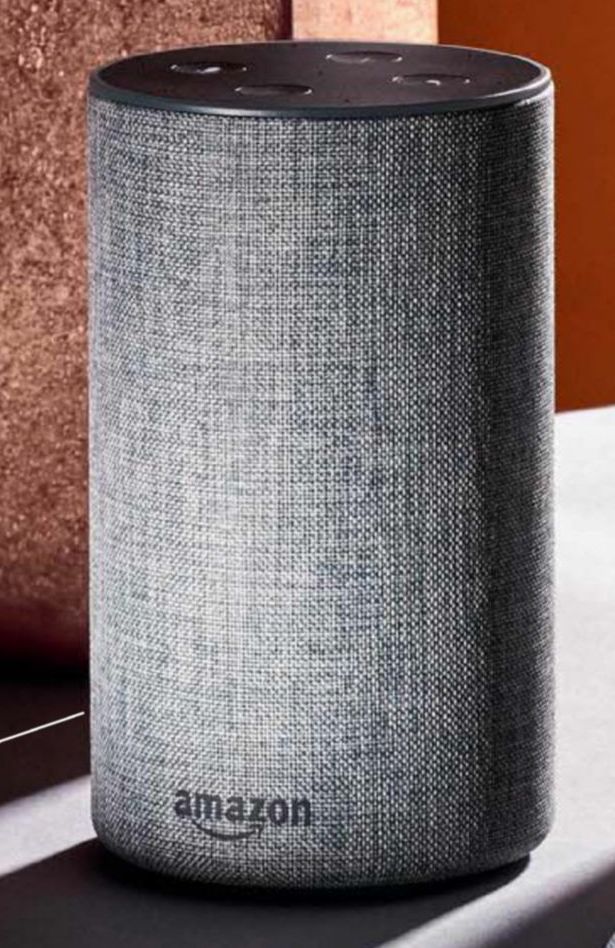 Three big names in smart assistants, but only two on test. 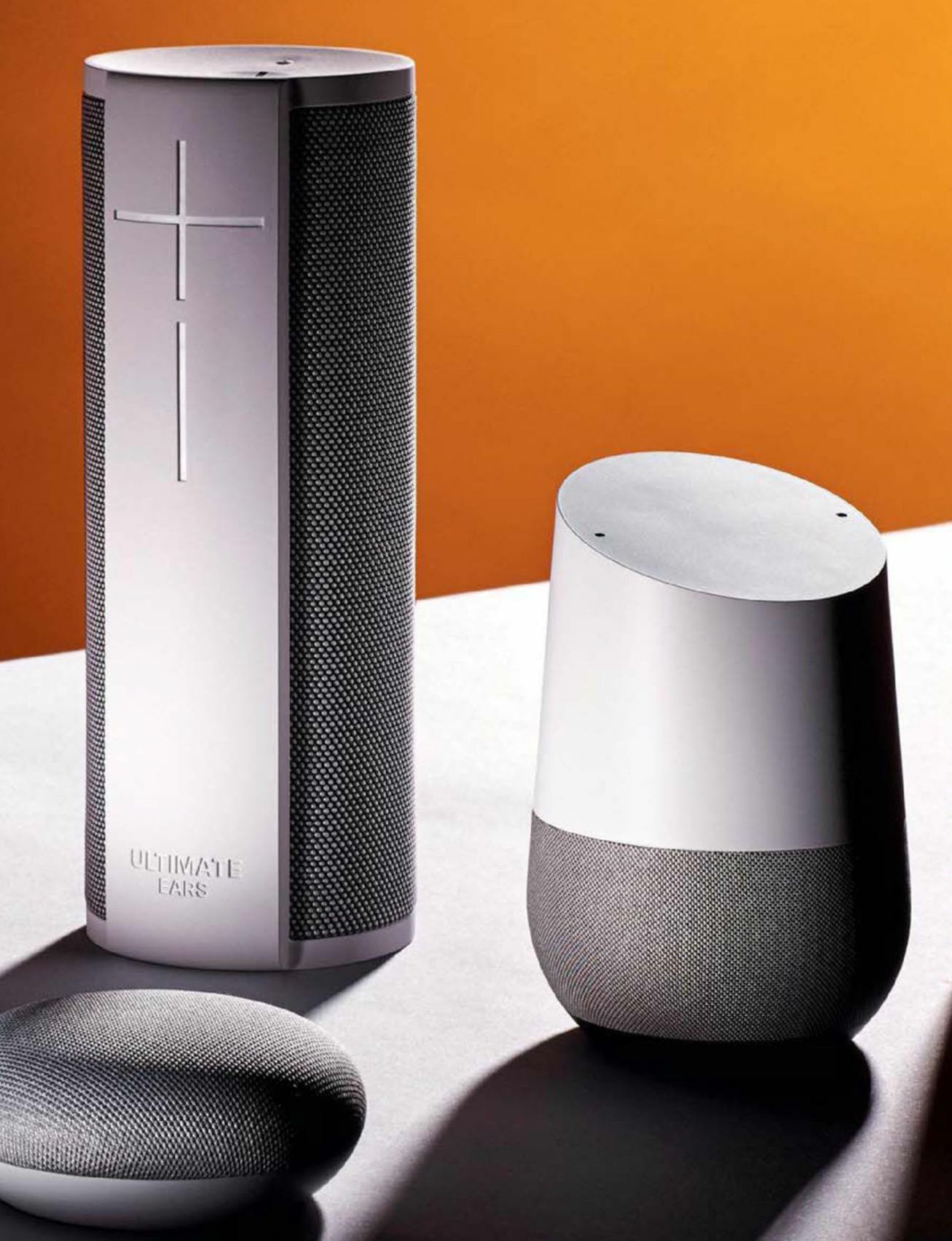 Amazon’s aggressive licensing of Alexa means it’s made its way into a number of new devices recently, though not all of them offer the same full control or range of skills that Amazon’s own Echo range has. Bear that in mind when buying.

At press time, Google’s own devices are the only way to use the advanced smarts of Google Assistant at home, but there are more coming – the company opened the Assistant up to other companies in mid-2017, so we’ll see more in 2018.

Apple’s been taking its time bringing a Siri-based smart home speaker to market; Homepod was originally slated for a winter 2017 release, but has been delayed until early 2018 for more refinement. It promises superior audio, but it’s going up against some strong competition.

While the smarts inside stay more or less the same, Amazon’s redesigned second-gen Echo does things a little differently on the outside. It’s had its edges smoothed, its height chopped, and been wrapped in subtle cloth cladding, possibly so it no longer stands out like such a looming black tech monolith in the corner of the average living room. The audio package has been completely revamped, with a new bottom-firing subwoofer and dedicated tweeters, all armed with Dolby processing. Frankly, it fires out a really appealing sound, with decent bass tone and perfect clarity for spoken word audio. At both low and high volumes the sound is more balanced and rich than is reasonable for a speaker.

This is, in every aspect, a better Echo than its predecessor. It’s not flawless – though the already-great microphone array has received both a hardware and software upgrade, Alexa has an occasional tendency to ignore commands issued in a noisy environment, particularly if the Echo is blasting at full volume or you’re projecting your voice quietly. While we’re being picky, we’d have appreciated a more granular level of volume control than the 10 notches on offer, and the lack of an auxiliary input means you’re stuck with streaming audio only.

A better Echo at an even sweeter price point than before. Smart home fanatics might be better off with the Echo Plus, though. 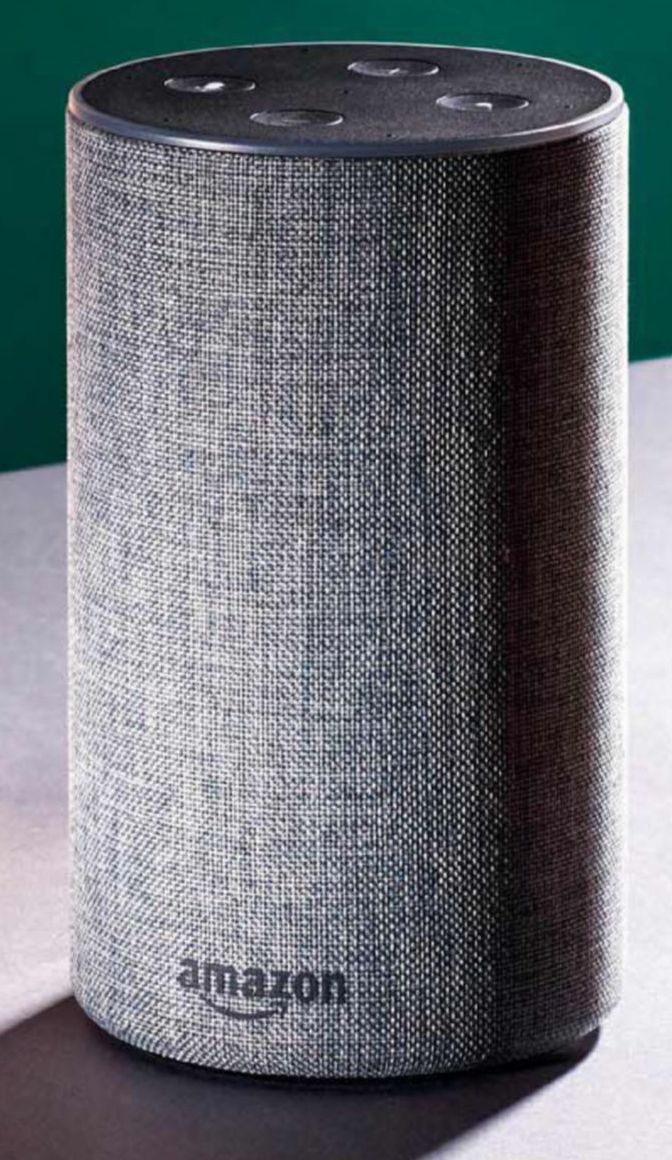 The upper end of Amazon’s audio Echo line sticks more closely to the original Echo design, at least outwardly. Available in looming black, this hefty cylinder retains the size and dotted speaker grille of its forebear. Volume is controlled by asking Alexa nicely to set it to a specyfic level or by tweaking the rotating volume collar on the top. Like its more squat sibling, there’s a new Dolby-powered speaker package installed, and this unit’s size gives rise to a somewhat larger and more resonant sound despite the identical audio hardware. The Echo Plus is much more than a smart speaker, though. Amazon has brought in Zigbee support, meaning the Echo Plus operates as a proper home hub, controlling your smart devices directly rather than interfacing with their own hubs. This should (if your devices are compatible, as tons are) vastly simplify and speed up any home setup, and the Alexa app automatically sniffs around your home to find relevant kit, making it easy to set up. At least in theory: its home hub portion feels somewhat lacking, although we’d gamble on it improving as the Echo Plus ages. 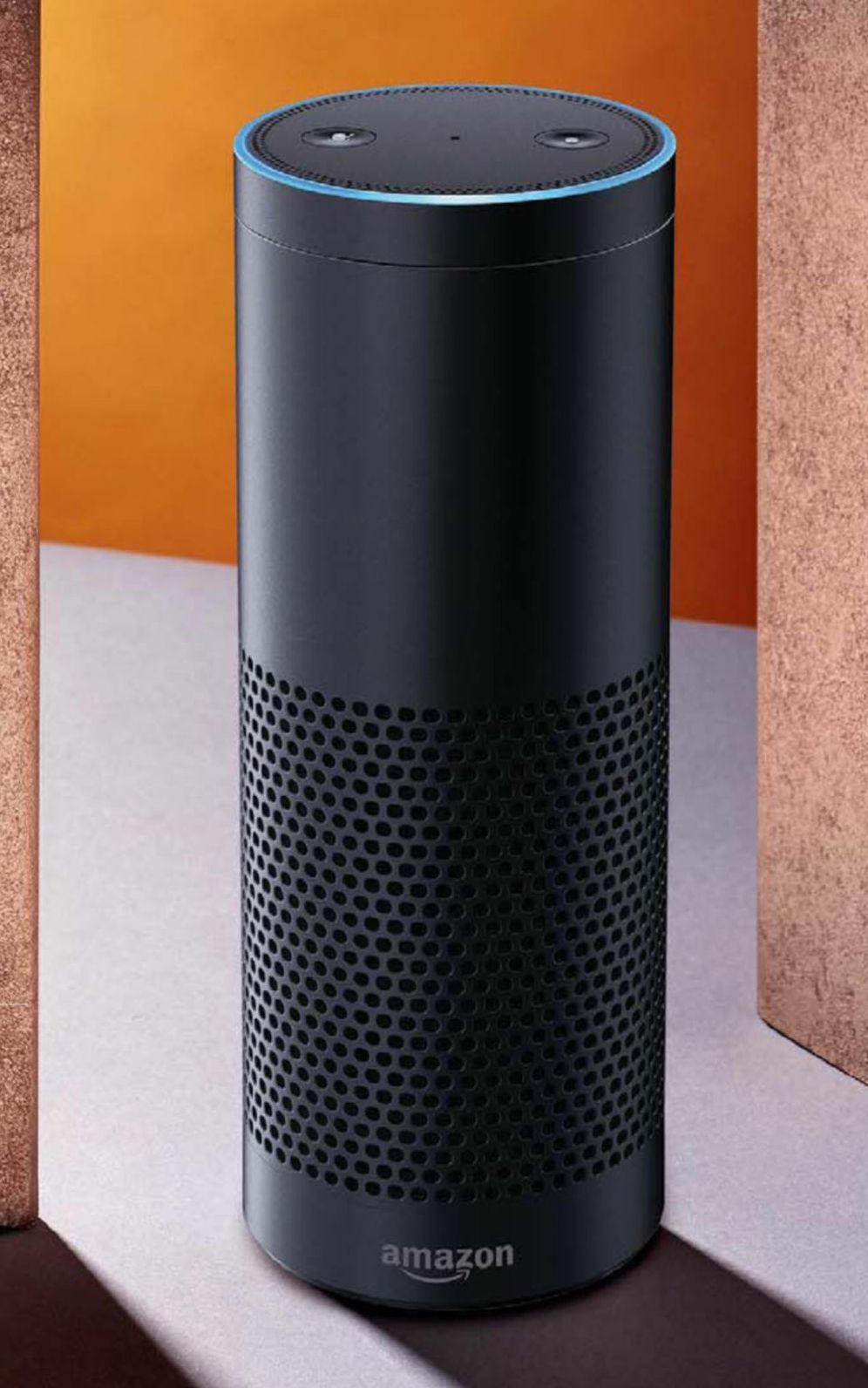 An Echo but so much more – once the home hub teething troubles are sorted, this will be unbeatable.

While many features stay the same between them, your choice of a smart ecosystem can make a big difference to your day to day. Case in point, Google Assistant – available on the Home and Home Mini, as well as some other speakers coming soon – is the only way to control a Chromecast vocally, and it’s much more adept at using natural language than its competitor. While it had more trouble with our accent than Alexa did (and, on the Home, struggled more to hear its wake word) there’s also proper multiuser support built in, with voice recognition for everyone in your family and their personal Google accounts.

The unit itself is small and apes the styling of many of Google’s home devices, with a flat slanted top, a hidden ring of RGB LEDs in said slice, and a cloth grille for its speaker. Not the sort of thing that’s hard to tuck away, but not overly obtrusive either. It throws out a bouncy sound when streaming via Wi-Fi or Bluetooth, although the Home isn’t strong enough to replace your proper stereo by any means, particularly as it lacks any form of physical output.

The best way to access Google Assistant in the home right now, but extended support in 2018 could send it packing. 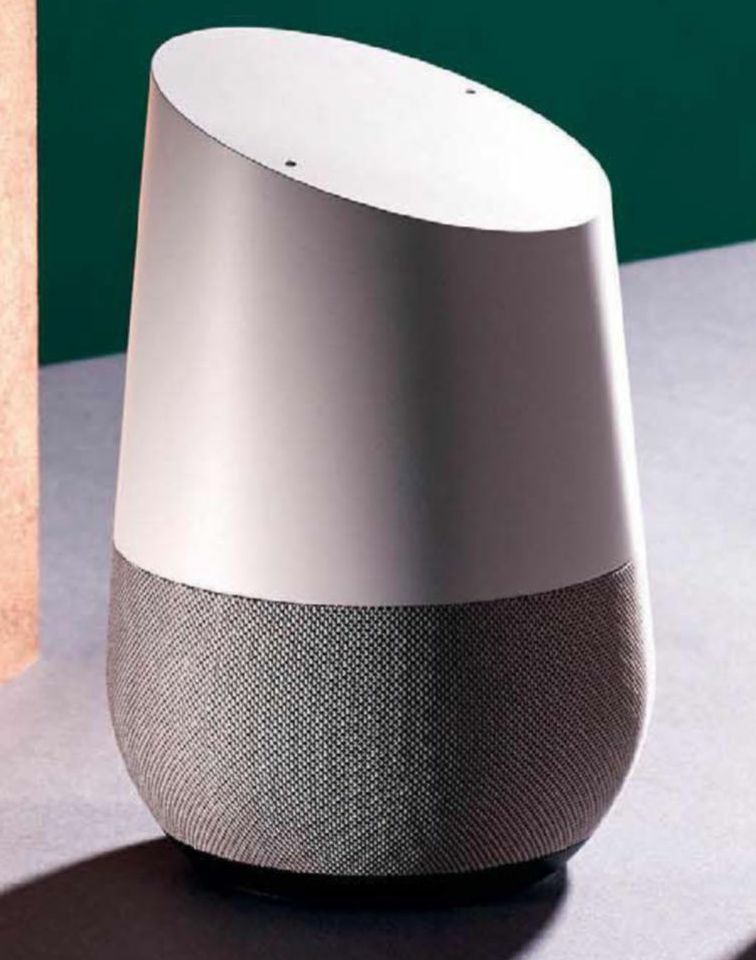 Aww, isn’t it cute? Google’s teensy little Home, pitched in both size and price to compete directly with Amazon’s Echo Dot, one-ups its puck-shaped competition in the style stakes, and it’s got audio built in too. It’s like a technologically adept cloth pebble, with a string of four hidden RGB lights in the top, hidden touch buttons on the edges of the cloth, and a physical switch for deactivating the microphone array.

For its size, the Home Mini belts out some perfectly reasonable and somewhat surprising tones with muscle, and voice recognition is good. Like the larger Google Home, though, this is no replacement for a more competent speaker system, and there’s no audio output, either 3.5mm or Bluetooth, so if you’re looking to connect a stereo to your network you’ll also need to invest in a Chromecast Audio. But as a first step into the world of Google Assistant, or a second pair of ears for a new room, it’s perfect.

Small it may be, but there’s nothing subtle about the Home Mini’s sound, and it’s an absolute bargain at the price. 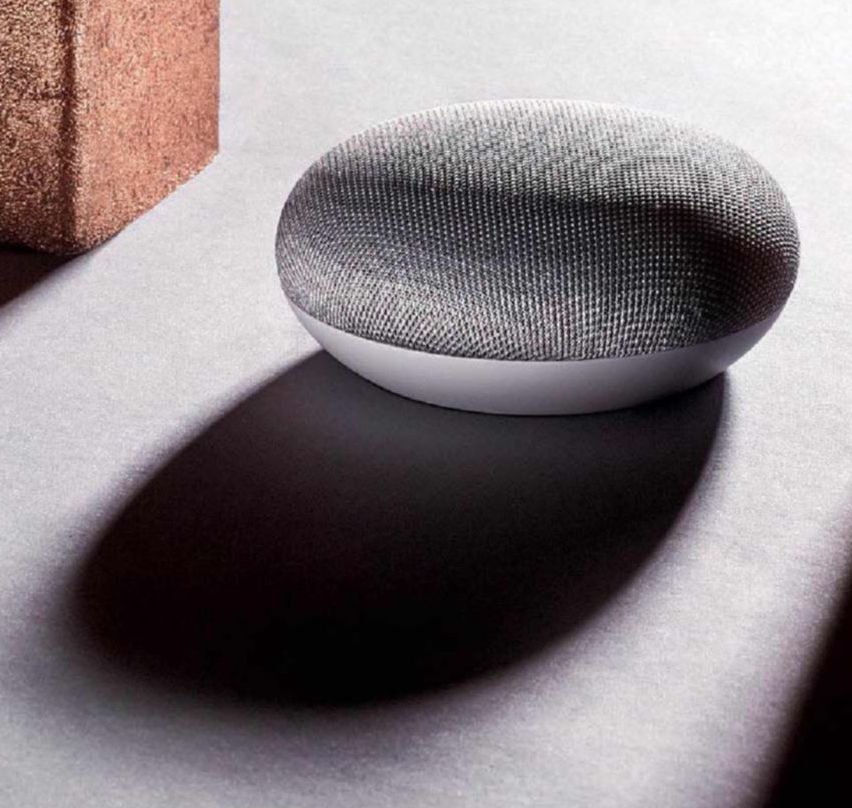 Ultimate Ears has a plan for you. You’re going to have a party, and things are going to get loud and wet, somehow. Thankfully you’re armed with the Megablast, the latest in UE’s IP67 – certified waterproof speaker range. The rubbery cylinder, slightly larger than the Echo Plus, is more than banging enough to earn its explosive moniker, but where you might expect a sound geared towards ripping faces off with pumping bass, there’s actually a supremely versatile, balanced soundstage; one which adapts to its medium perfectly. The Megablast’s 360-degree speaker setup is equally adept at pouring out a podcast as it is screaming through some metal or dubstep.
It’s portable, too, charged by USB through a port on its bottom side, and the Megablast marks Ultimate Ears’ Alexa debut. It’s better suited to the party than the lounge, though; the triple beam-formed mics are decent but less sensitive than those of the Echo, plus powering this in an upright position means shelling out more dough for the charging dock. Sadly there’s no direct Wi-Fi streaming on offer, and (currently) a more limited range of app support through Alexa than you’ll find official Echo devices.

Brilliant sound, perfect portablitity, and Alexa along for the ride as a nice extra. Inflate the paddling pool: it’s party time.

Sonos’ reputation ‘speaks for itself: it may I have been one of the first to market with multi-room audio, but it’s retained its place I at the top by producing some absolutely fantastic speakers. Unsurprisingly, this first ^ smart Sonos device, essentially a Sonos Play:1 with added Alexa support and hubless Wi-Fi, is no different. The One is a sumptuous, warm, loud, exciting box, with enough range to drive out tunes or keep them subtly quiet; the blast that comes from asking Alexa for volume five reveals just how powerful the pair of Class D drivers inside really are. The audio balance is tweakable via the app, and like other Sonos devices you can tune it exactly for your room. Since this is a front-firing speaker, you’ll probably want to place it in a corner, and it can also tie together with other Sonos units to create a dual-speaker stereo setup.

Adding Alexa, via a sensitive six-mic array that’s as good as, if not slightly better than, Amazon’s own seven-mic setup, is a genius move, and there’s word that Google Assistant support will come later in 2018. Even if you don’t have an existing Sonos setup, this is cheap enough that it’s the perfect first step. 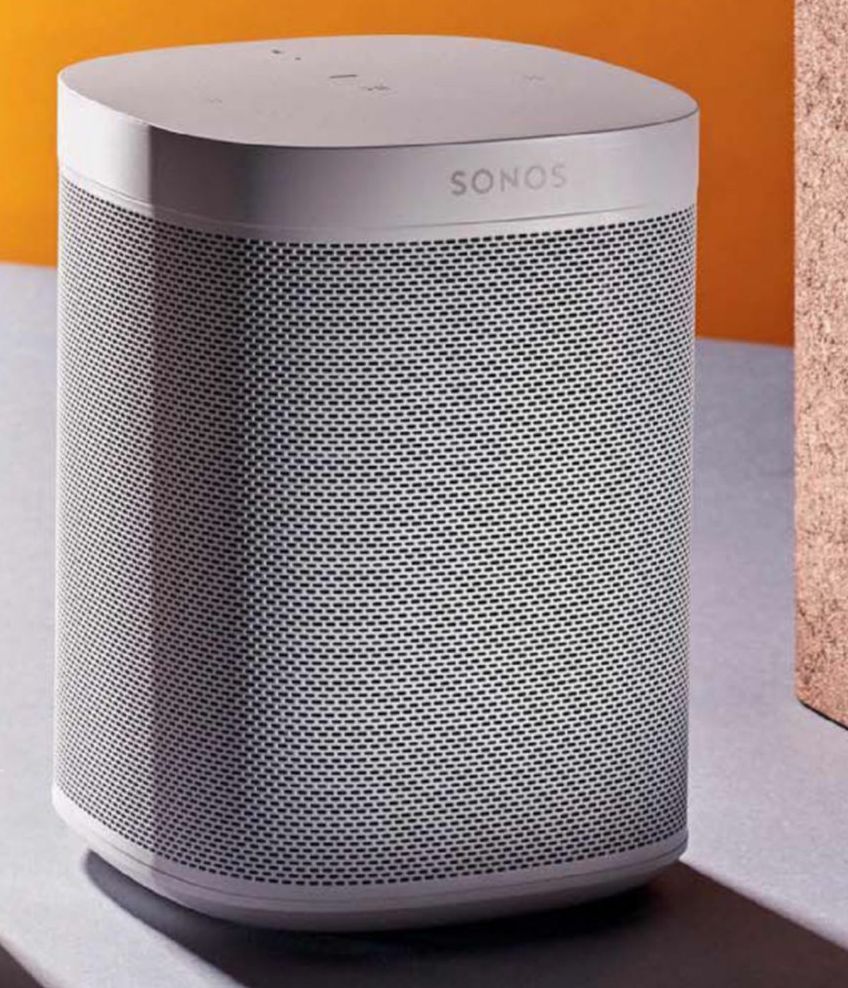 An absolutely fantastic network audio device, made even better by the inclusion of Alexa support. 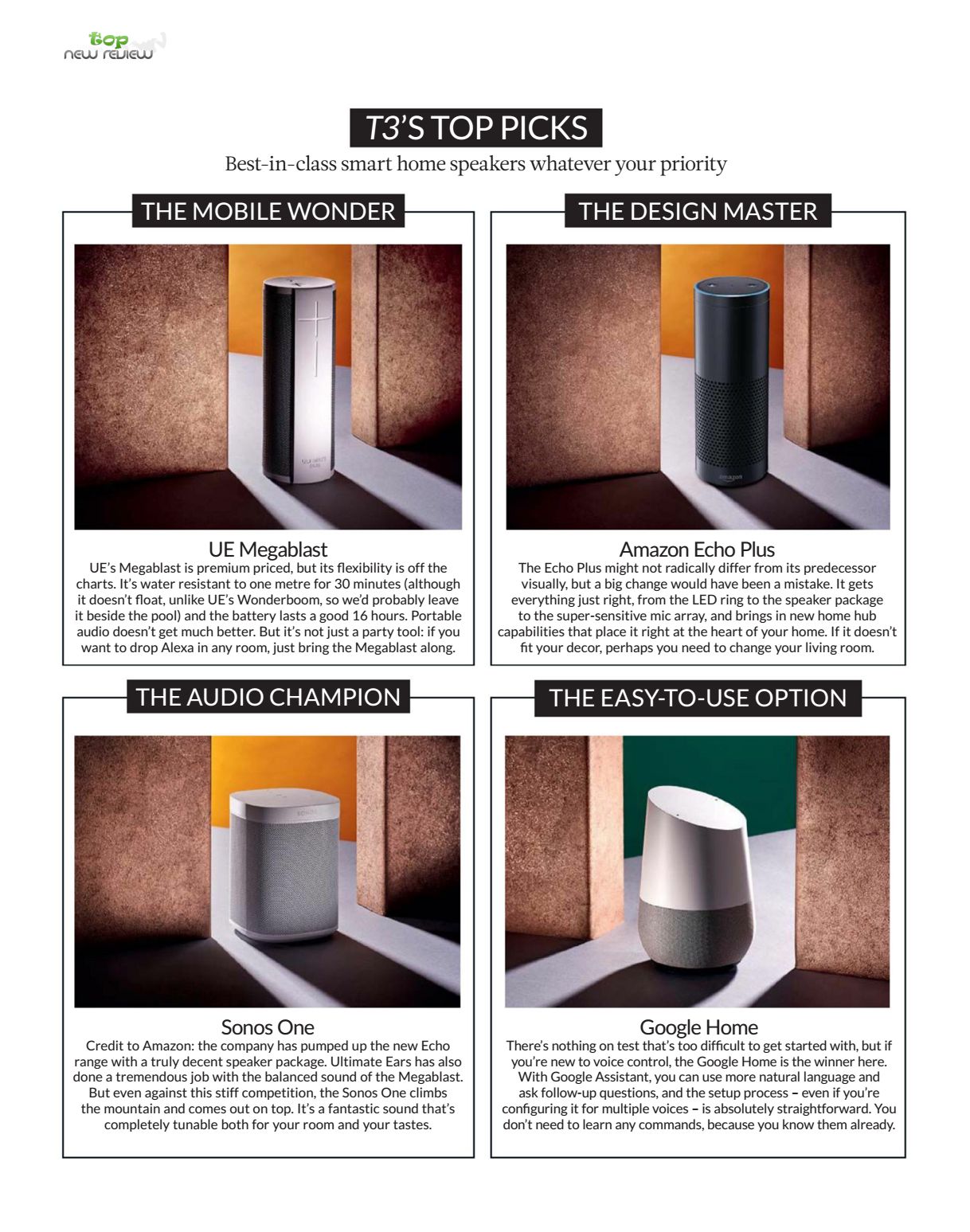