The Ryzen 3 2200G is a sizeable cheaper than its Ryzen 5 sibling – a huge amount of money at this end of the budget spectrum.

Even after recent price cuts of AMD’s first- generation Ryzen CPUs, it still appears to offer good value for money, costing the same price as the Ryzen 3 1200.

In fact, its base frequency and boost frequency of 3.5GHz and 3.7GHz match those of the Ryzen 3 130OX, which retails for more and also lacks on-board graphics. 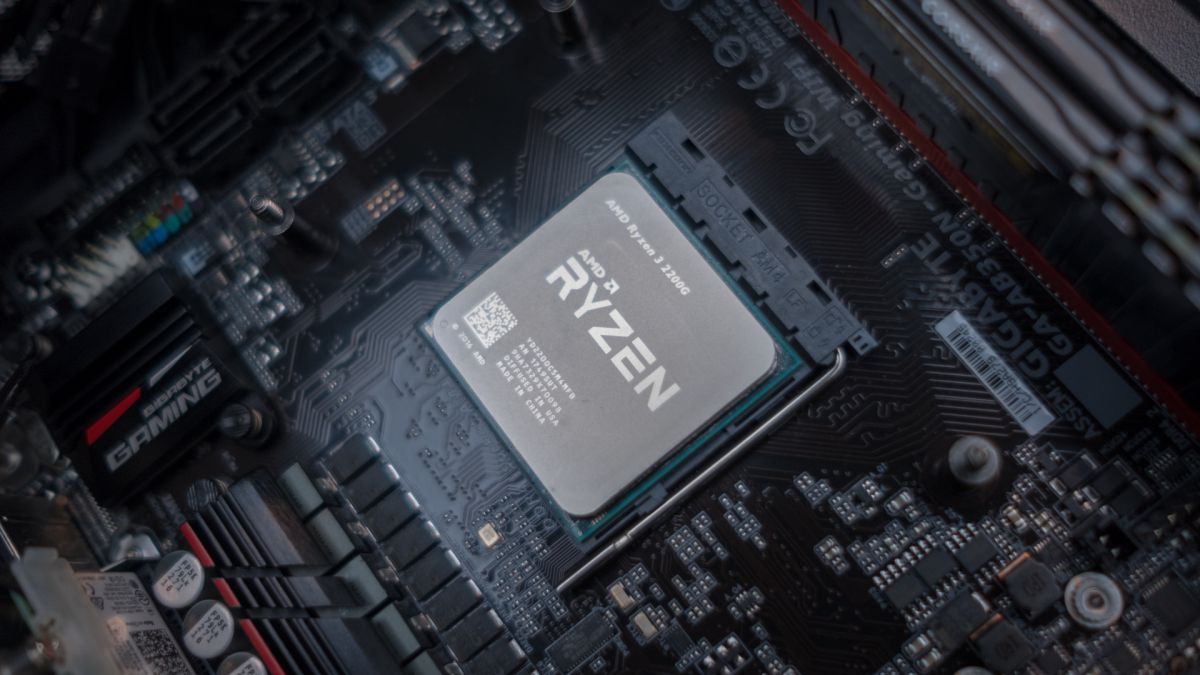 However, the latter also sports XFR, giving it a 200MHz advantage in single- threaded workloads at stock speed, where it’s able to reach a maximum of 3.9GHz.

Both the Ryzen 3 1300X and 2200G chips have four cores and lack Simultaneous MultiThreading (SMT), so are limited to four threads, unlike the Ryzen 5 2400G.

In terms of GPU horsepower, the Ryzen 3 2200G is also noticeably less powerful than the Ryzen 5 2400G. It only has eight compute units compared to 11, which is the same as AMD’s Radeon RX 550 GPU.

It also has a much lower GPU frequency than the more expensive APU, at 1100MHz.

Like the 2400G, the 2200G is limited to providing just eight PCI-E lanes to discrete graphics cards as well, although the performance impact will be minimal.

As with all of AMD’s APUs, the Ryzen 3 2200G shares your system’s memory, and our test motherboard could supply up to 2GB for its own personal use.

This situation means that using faster memory is akin to overclocking your graphics card’s memory, so you’ll want to use the fastest memory you can afford if gaming performance is important to you.

However, even at stock speed, the Ryzen 3 2200G was quicker than both the Ryzen 5 1400 and Ryzen 3 1300X in our image editing test most likely due to it sporting AMD’s new Precision Boost 2 tech.

The pricier APU also has a significant advantage in our heavily multithreaded Handbrake test.

The lower number of compute units and GPU frequency saw it lose to the Ryzen 5 2400G in games though.

The biggest gap was seen in Deus Ex: Mankind Divided’s 30 fps average frame rate, which was 5 fps slower than the Ryzen 5 2400G, although both APUs could only manage playable frame rates in this game at 1,600 x 900 with low settings.

The 2200G was 2fps adrift on the minimum and average frame rate in Fallout 4 too. Once overclocked, though, the Ryzen 3 2200G was still competitive and was rarely much more than 10 per cent slower than the Ryzen 5 2400G in games.

If the Ryzen 5 2400G didn’t have SMT, the Ryzen 3 2200G would be a bargain, as there’s not a huge difference in gaming performance, especially when overclocked.

However, you get a much more grunt outside of games with the Ryzen 5 APU. If four threads are enough for your workloads, though, the 2200G is a great entry-level APU for gaming at 1080p and below with low to medium settings.

We managed to overclock the base clock to 3.9GHz

The 2200G falls behind in heavily multithreaded workloads, but its gaming and lightly threaded performance is astounding for the price.