WD PR2100 Review – The popularity of network attached storage is succinctly illustrated with this latest release from Western Digital: The WD My Cloud PR2100 is essentially an upgraded take on last year’s My Cloud Business DL2100—a device that was aimed squarely at small businesses. This new device uses the same chassis, with its austere and utilitarian drive bays, but updates the innards so that it can handle 4K streaming. It’s a device that’s serious about your data, but appreciates that you’re just as likely to use it in the home as you are in the office.

The My Cloud PR2100 is a dual-drive unit, although the PR4100, a four-bay device, is also available. Both units boast the same core hardware of a quad-core Intel Pentium N3710, coupled with 4GB of DDR3. This CPU has a base frequency of 1.6GHz, capable of bursting up to 2.56GHz if needed, although it’s the low TDP of just 6W that’s possibly more noteworthy— you’ll rarely call on the full performance of the chip, but you will leave the unit plugged in 24/7. In testing, it pulled just 22W from the wall, which is impressive.

One thing that we noted with the original DL2100, and something that continues to grate with this model, is how noisy it can be. We’re not talking about the bump and grind of the hard drives, which isn’t much more noticeable than other NAS units, but rather the whine of the fan at the rear of the unit. This is loudest when it’s first turned on, but revs up at other times, too. It could well limit where you place the NAS. 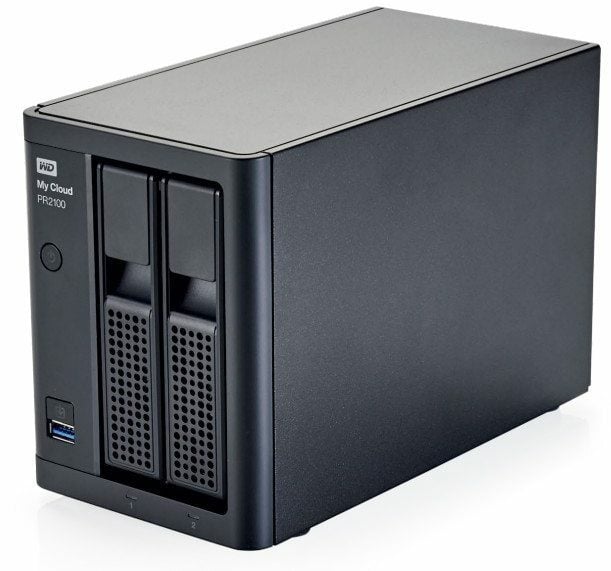 On the positive side, this device is incredibly easy to set up: Plug it in, connect it to your router, turn it on, go to the My Cloud website, and you’re up and running. The main drive interface is simple but slick, and the homepage clearly shows everything vital you’d want to know about the NAS. Accessing the drive locally is as straightforward as you’d expect, while connecting to it over the Internet is also surprisingly easy, too. Uploading files remotely can be a sluggish affair, but pulling that data off is snappy, and local uploads are much quicker. In testing, we witnessed local read and write speeds of 119MB/s and 118MB/s respectively, which are both very healthy.

The My Cloud PR2100 is available as an un-populated device with a list price of $399, but the model we have here ships with a pair of Western Digital’s own 8TB Reds. These drives cost $345 each on their own, so buying this drive populated represents reasonable value for money as well. By default, these are configured as a RAID 1 volume, which makes sense for a two-drive device that you’re trusting with your data. This gives you 7.93TB of space to play with, and has the reassurance that comes with a mirrored array. This isn’t your only configuration option, though, because it supports JBOD, Spanning, and RAID 0 configurations as well.

One particularly nice feature of the My Cloud Pro is the front-mounted USB port that enables you to back up the contents of whatever you plug into it with a touch of the button above the port. It’s a simple enough idea, but one that is often overlooked by bigger, cleverer devices. A counter to this is that those bigger, clever devices probably have a more extensive app catalog to call upon. There are 17 apps available for the My Cloud Pro, covering everything from media servers to torrent clients, though—so, for the vast majority of uses, Western Digital should have you covered. A notion that sums up the My Cloud Pro well, -alan dexter

Others 2x power-in (only one adapter supplied)

£672.30
Let us know your thoughts on a product or view reviews from our members, independent experts and other websites.