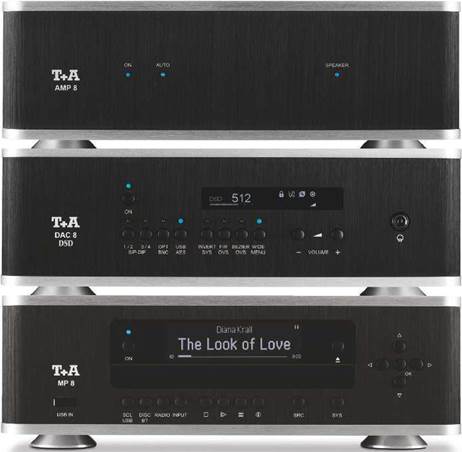 T+A has taken the idea of the mini separate system and updated it for the modern age. Ed Selley takes a listen to the results. Read our T+A SERIES 8 Review.

Not so long ago, there was a market segment given over to mini separates; products that offered much the same functionality as a full-width component but wrapped in a smaller, more overtly ‘styled’ chassis. They could be mixed and matched with other brands but the idea was that a stack of them offered something a little smarter looking without compromising on performance. As equipment has been moving away from being a default width in recent years the idea had gone out of fashion a little, but now T+A has brought it back with the 8 Series.

As the name suggests, this is a range sold individually but intended to be combined for best results. They have a form factor that is different to T+A’s other components, but borrow many of the features used elsewhere. This is perhaps most apparent in the MP 8, which has no decoding of its own. While we have seen streaming head units before, this is considerably more ambitious in its scope.

The network functionality is conventional enough although usefully comprehensive. The MP 8 supports PCM to 32-bit/192kHz and has onboard support for Tidal, Qobuz and Deezer. It can be controlled by T+A’s MusicNavigator app or switched over to become a Roon endpoint. There is also internet radio access, aptX-capable Bluetooth and a selection of digital inputs. Where the MP 8 is less conventional is that there is also a CD mechanism and DAB/FM tuner. All of these connections are then made available to a S/PDIF output for connection to a DAC.

The matching DAC 8 is a little more conventional. It features a USB, AES, optical and four S/PDIF connections that are made available to RCA and XLR. These are variable output devices with a volume control in the circuit at all times. The decoding hardware borrows from other T+A DACs and is relatively unusual. For PCM decoding, it features eight Burr Brown DACs in a double symmetrical arrangement with a separate 56-bit signal processor to handle upsampling and filtering, the latter of which has multiple selectable options. There is 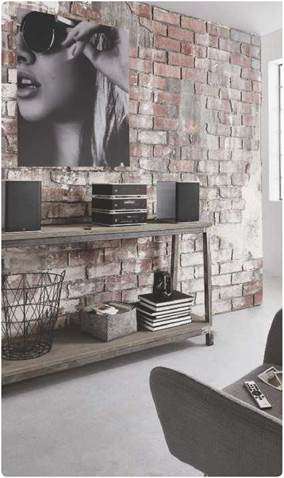 then a completely separate decoder for DSD material, which T+A calls a True One Bit DSD Converter and is also shared with others in the range.

The final member of the family is the AMP 8. This two-channel power amp delivers 80W of sustained power into 8ohm and uses T+As High Voltage Concept, which also features in its more expensive products. Purists might be alarmed to find a large fan aperture on the underside, but it proves inaudible in use. One slightly less satisfying feature is that the AMP 8 has a sleep and autostart function, which means that if you leave it for a while it will turn itself off and only restart after it has missed a few bars of music.

The menu is a maze of tiny writing and, unless you have WPS access on your router, I would suggest you’re going to be better off using a wired connection. I also find the MP 8 to be somewhat recalcitrant used as a Roon Endpoint, although T+As control app is pretty good. Compared with more graphics-driven rivals, the 8 Series feels slightly complex.

It is much harder to argue with the overall levels of build and finish, though. The casework is beautifully made and the contrasting silver and black is something that really comes into its own when you have the three stacked together. This is undermined by the plastic remotes, but the app takes some of the strain in this regard making it less important.

With the trio setup and connected to Kudos’ Titan 505 (HFC 451), it goes a long away to putting the setup quirks behind it. The most interesting aspect of the performance of the units as a whole is that, without ever coming across as coloured or inaccurate it very clearly has a character of its own and the DAC 8 and AMP 8 in particular combine to produce something that is very enjoyable indeed. With the ‘Wide’ setting enabled, which pushes the analogue reconstruction filter out to 120kHz and the ‘Bezier’ filter selected (which adopts a specific response curve), the performance is impressively free from any perception of digital edge.

What this translates to in practise is a presentation that feels extremely refined and natural. The very immediate and tangible Howl by Junip is delivered with little perception of there being any processing at work which, given there are eight DACs and a dedicated upsampler in the signal path, is not an inconsequential achievement. The distinctive percussion set for this track is beautifully reproduced and fizzles with urgency. Without ever sounding forced or wearying, the T+A really motors along, latching on to time signatures and delivering much of the urgency of the musicians themselves. No less impressive is that within two tracks of the Junip album, the far less frenetic Don’t Let It Pass sounds unforced and wonderfully flowing with no trace of this forcefulness being present.

The MP 8 supports 32-bit/192kHz PCM alongside Tidal, Qobuz and Deezer

Picking apart the balance of responsibility between the DAC 8 and AMP 8 is not easy, but some testing with them on their own suggests that the former is responsible for creating the sense of space and tonal realism that is so apparent. The AMP 8 is a more neutral performer, but not without some immediately positive qualities. It exerts impressive grip over speakers and the bass response is encouragingly deep and controlled, combining impact with enough detail 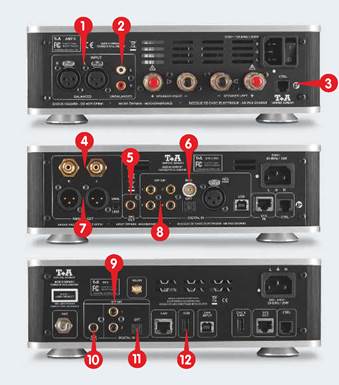 3) Trigger control to connect to DAC 8 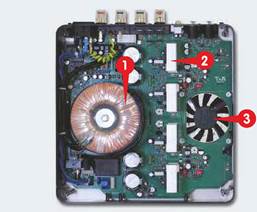 and texture to always be more than a simple blunt instrument. There will undoubtedly be a few speakers for which the 80W it has on hand aren’t enough, but for most designs it should prove more than sufficient.

The MP 8 is a slightly tougher sell. It is entirely transparent in its presentation as you might expect and it is a stable and effective UPnP platform. If you’re still using CD, the presence of that transport also proves incredibly useful. There is no ignoring, however, the fact that it costs a full more than an Auralic Aries G1 (HFC 441), which is a better overall streaming transport.

The benefits of the three units working together are harder to ignore. Like a few systems of this nature I have tested, the absolute linearity of the volume and the way that – unlike some more conventional rivals – there isn’t a point where this system suddenly wakes up and sounds better than at another point, is something to be applauded. If you’re firmly in the post-turntable camp of system building, it’s difficult to argue with some of the benefits that adjusting volume in the digital domain has to offer.

One other area where it excels is DSD. T+A’s bespoke decoding arrangement doesn’t process the signal as DSD all the way through, converting to PCM at some point – not least because DSD is not compatible with digital volume controls – but there is a small but noticeable change to the presentation when you switch to DSD. Using a

Roon Nucleus+ (HFC 439) over USB with DSD processing being switched in and out of the spellbinding Vessel In The Sky by Hundreds, is significantly preferable. Without losing the punch and immediacy of the PCM version, there are small gains to the richness and the midrange in particular sounds more realistic and immediate as a result. The native DSD of Depeche Mode’s Violator is even better, offering up a compelling argument that PCM conversion need not be detrimental to the way that these files sound.

The 8 Series is far from an inexpensive system solution and I don’t feel that every component is equal when it comes to their contribution to the overall performance. Nevertheless, the way that they function as a trio is something that I’ve come to admire a great deal in the time I’ve spent with them. Without compromising on the technical integrity of what T+A does as a manufacturer, they are attractive to look at and – once set up – highly enjoyable to use. If you are looking for a complete all-digital system, this is a tremendously accomplished trio that’s deserving of consideration •

LIKE: Flexible selection of inputs; well made; decent control app

WE SAY: An intriguing streaming source with good performance, albeit at a high price

LIKE: Impressive sound; selection of inputs; very well made

DISLIKE: Complex to use; flimsy remote; volume control can’t be switched out

WE SAY: A superb sounding DAC that works brilliantly as a preamp too

WE SAY: A genuinely talented amplifier that should work well with a variety of speakers

The closest comparison is the combination of Chord Electronics TT 2 preamp and DAC and TToby power amp that featured in the Beautiful System in HFC 455. The Chord combo is more expensive than the T+As – roughly a box more. The TT 2 is a better DAC than the DAC 8 though. As a trio of units, the T+As work brilliantly and in an entirely self­contained fashion.