Seagate FireCuda 2TB Review – Seagate’s FireCuda range is the last hurrah of hybrid desktop hard drives that combine a traditional hard drive with a small SSD. While they’re still a viable option for laptops where there’s sometimes only room for one drive, they’ve failed to take off in the desktop PC space, as the lack of space restrictions and tumbling prices of SSDS means it simply makes more sense to buy a separate SSD and hard drive. 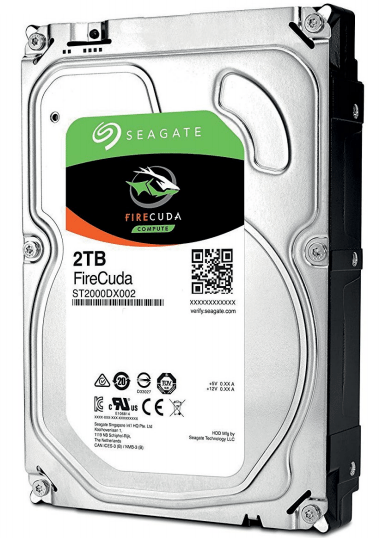 The FireCuda is facing tough odds in this market, as it tops out at just 2TB. However, so even the cheapest SSD and hard drive combination would struggle to compete on the price front.

Then again, that’s because you can’t buy SSDs this small. The FireCuda uses just an 8GB portion of NAND flash memory for its SSD buffer, which is rather pitiful, whichever way you look at it.

The drive works by keeping tabs on which files are accessed most often and storing them on the SSD portion, potentially resulting in faster boot and app-loading times.

However, even if you allow for the fact that not all of the circa-20GB of space that Windows 10 occupies would be accessed regularly, it’s still a given that 8GB wouldn’t allow for all many of your favorite apps and games to be speeded up by the SSD.

What’s more, the NAND is only of the multi-level cell (MLC) variety, so it isn’t even particularly speedy or long-lasting, although Seagate does provide a five-year warranty with these drives, so the NAND should last at least that long with typical use.

The hard drive, meanwhile, is a two-platter configuration spinning at the bog-standard speed of 5,400rpm, with Seagate claiming sequential read/write speeds of 210MB/sec and similar power consumption figures to the BarraCuda, while the noise level hits 36.5dB.

Of course, the proof of the pudding is in the eating, and for all our dismissive tone above, the FireCuda does a reasonable job, sometimes. For some reason, this drive doesn’t get on with AS SSD, with it returning an appalling sequential read figure of just 60.9 MB/sec and having the slowest access time on test. However, in CrystalDiskMark, it was largely on a par with the other cheaper drives for sequential workloads, and sat at the top of the table for random writes.

In PCMark 8, it beat all and sundry in nearly all the tests and had a huge lead in overall bandwidth. This result reflects the fact that PCMark is the closest to a real-world test, as it focuses on app loading times and repeats each test three times, giving the drive a chance to learn what data is being accessed frequently and optimize it appropriately.

As such, if you’re planning to build a tiny system in which performance isn’t the biggest concern, but want a decent amount of storage space, the FireCuda is worth considering.

Alternatively, if you just like the idea of getting a little bit of a speed boost but don’t want the hassle of two drives, and you don’t want to pay the extra money for faster hard drives, then the FireCuda has its place too, especially given its lengthy warranty.

The Seagate FireCuda occupies a small niche that won’t interest to many desktop PC users, but it has potential if you’re in that niche. There’s a handful of scenarios where its hybrid approach will prove useful, and its low price and long warranty sweeten the deal.

Most desktop users will be better served by a separate SSD and hard drive, but there’s a handful of scenarios where this hybrid drive proves handy.

It’s just a shame that Seagate doesn’t offer these drives in larger capacities with larger, faster NAND. A 4TB version with 32GB of NAND could be a killer product.

Most desktop users will be better served by a separate SSD and hard drive, but there’s a handful of scenarios where this hybrid drive proves handy.