SanDisk expands its flash range with a portable SSD

Evidence about how far we’ve come with flash storage is most likely lurking at the back of a drawer. It’s a flash USB key that holds 512MB or less, and most people have a few of those gathering dust somewhere.
The other end of that spectrum is the SanDisk Extreme 500, a portable flash storage device that comes in 120GB, 240GB and 480GB capacities while offering speeds in excess of those you might expect from an internal hard drive. 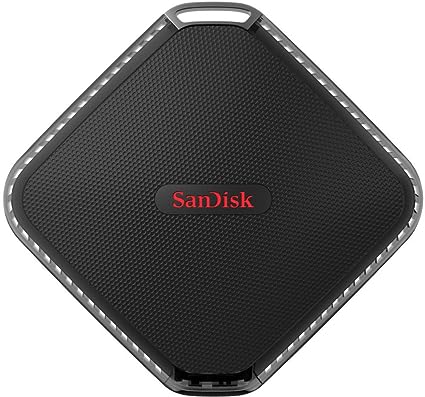 The trade-off here is the size, because the Extreme 500 is larger than most USB keys, being a flattened diamond shape, measuring 75mm along its edges. It’s still small enough to easily fit in a pocket, although you also need to find room for the short and rather stiff USB cable that comes with it.

This cable and how it connects to the Extreme 500 isn’t the part I liked the most of this design. SanDisk chose to use a bladed micro-B connector cable, the port for which is in one of the corners. Given how thin the whole assembly is and that its construction is entirely plastic, this is probably breakage just waiting to happen.

To protect the port, it also used a rubber plug that you pull to one side to insert the cable. This also looks like it will be quickly broken or removed by anyone annoyed at how messy it looks.

Poor engineering choices aside, the Extreme 500 makes up for those shortcomings with some really great performance. USB 3.0 isn’t comparable with SATA-3 for bandwidth, but it can deliver a decent transfer rate if treated well by the device.

In my initial benchmarking, that translated into reading at 332.1 MB/s and writing at 301.8MB/S. Even activating UASP Turbo Mode’ I wasn’t able to get faster than this, and I fell short of the 415 MB/s read and 340MB/S write that SanDisk claims.

While I couldn’t achieve those super high speeds, it was at least double the best physical hard drives and triple what most people would experience, though not the ‘X4 FASTER’ that is emblazoned on the box.

I should also point out that you can only achieve those speeds if you’re reading from or to a device that’s even quicker, like a SATA-3 connected SSD.

For those with a 130MB/S hard drive, that’s likely to be the limiting factor for any transfer, not the Extreme 500.

The other point I need to make is that SanDisk makes a product called the SSD Plus, a 2.5″ SATA SSD, and the 240GB version. Combining that with a Xenta USB 3.0 caddy costing, you can get a similar level of performance but even greater flexibility for nearly less.

Although I can see that the Extreme 500 fills a niche for now, what I’m really looking forward to seeing is the upcoming Extreme 900, which has USB 3.1 technology in its corner. That product will be more likely worth the extra that SanDisk is asking, whereas the Extreme 500 probably isn’t. Mark Pickavance