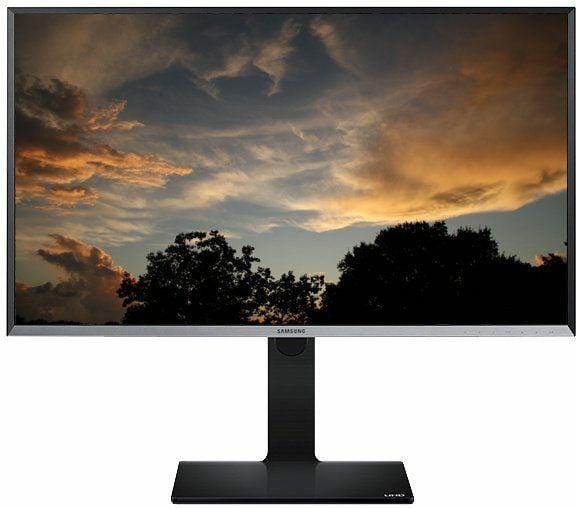 Ultra-HD monitors are a boon to creative professionals and well

Heeled enthusiasts, and this 32in model from Samsung is one of the highest-quality displays we’ve ever tested.Featuring a 3840×2160-pixel resolution, the Samsung LU32D97KQSR Review, also known as the UD970 or U32D970, offers the equivalent of four full-HD monitors rolled into one, allowing you to scrutinize your images in the finest detail, but this display is about much more than resolution. Covering 100 percent of the Adobe RGB color gamut, the UD970 is capable of displaying a massive range of colors; going far beyond what standard monitors can reveal and matching the capabilities of professional digital cameras.

The UD970 avoids the bulky, and ugly, look of many professional grade monitors, featuring instead a subtle two-tone metallic grey finish with gentle, sweeping curves. There’s plenty of plastic on show, it’s no iMac, but the overall finish is rather harmonious for a display of this size which could otherwise look rather imposing.

The panel comes in a matt finish and is fitted to a fully height-adjustable stand which also swivels and pivots into landscape format. Inputs include 1x dual-link DVI, 1x HDMI 1.4 and 2x DisplayPort. You also get a headphone socket and a four-port USB 3.0 hub. The display is capable of displaying the full 4K resolution at 60Hz using DisplayPort 1.2 Single-Stream Transport (SST) mode.

Users of Intel Integrated graphics should be warned that the 4K/60Hz resolution doesn’t work in Multi-Stream Transport (MST) mode on the UD970, so Intel’s Collage Mode cannot be used. This limits 4K operation to 30Hz on Integrated graphics solutions found in Haswell and older processors.

A row of seven control switches lines the bottom right of the display, operating an onscreen menu system, which is both clear and easy to use, despite the complexity of its many functions. The panel itself features Samsung’s Super PLS (Plane-to-Line Switching) technology, which delivers IPS-like performance including wide ‘178 degree’ viewing angles horizontally and vertically. It also delivers excellent color reproduction and, in this regard, the performance of the UD970 is nothing short of phenomenal.

The monitor is capable of storing custom calibration data internally and the UD970 ships with a printed calibration report in the box demonstrating that each particular model falls within Samsung’s stringent specifications.

It’s no surprise then, that our own measurement tests reveal the best color accuracy results we’ve ever tested. The worst error reported is a Delta E of only 1.57, with an overall average of just 0.57 Delta E. But, it gets even better than that. We ran Samsung’s own Natural Color Expert software in conjunction with our Datacolor Spyder4 Elite calibrator before re-running our tests. The color accuracy results improved to a maximum delta E of 0.91 and an average delta E of 0.38. A Delta E of 1.0 is defined as a ‘just noticeable difference’, so the UD970 is in essence perfectly accurate after calibration.

It’s a similar situation with screen uniformity. Poor monitors can vary considerably in color and brightness response across the surface of the screen. Variations in brightness of up to 20 percent are not uncommon on consumer displays, even on decent models. The Samsung on the other hand never exceeded 6 percent brightness variation and generally kept the color uniformity error in the region of around 1.0 Delta E, the worst example being a Delta E of 2.9.

One problem with wide-gamut displays is that, unless you’re working in a properly color-managed environment, colors can look over saturated. The UD970, however, can masquerade as a standard sRGB display or any of a wide selection of other standards via the built-in menu or under the control of Natural Color Expert.

If the UD970 has an Achilles heel, it’s in the area of contrast. The monitor can display delicious-looking images, but switch to watching movies and you’ll notice it doesn’t deliver the punchy deep blacks of a decent TV. We measured a maximum contrast ratio of 490:1, which falls well behind many much less expensive displays and is the worst contrast score in this group test.

That said, gaming on this display is in no-way disappointing. In fact it’s very exciting and immersive, but you’d be channeling a considerable amount of money into features you don’t need if this is your main reason for buying a UHD display.

The UD970 is a pricey display that never feels too expensive for the phenomenal image quality it delivers. Its 4K UHD resolution, combined with accurate color rendition and flexible display modes make it an excellent choice for graphic artists. However, if you’re after a gaming or multimedia display, you’d be better off saving some money and going for something with better contrast.