Capable of cutting endless custom joints and templates, the PantoRouter is a really clever concept, says John Lloyd, but would perhaps be better suited to the machine-based woodworking enthusiast with an engineering brain. Read our PANTOROUTER PRO Review.

As you might have already guessed, a ‘PantoRouter’ is a cross between a pantograph and a router, and just in case you’re not sure what a pantograph is, it’s a mechanical linkage made up of parallelograms, which is used either to collect power for a train or tram from overhead cables – possibly not much call for that sort of device in woodwork; or to copy or scale drawings – again, not something you’d immediately think would be of very much benefit to a woodworker. Unless, of course, you link this mechanical linkage up to a router. If there’s a router involved, then maybe this could be interesting.

Let’s go back to the chap who invented the PantoRouter, Matthias Wandel, whose stated aim was that he ‘wanted to build a machine to make tenons with rounded ends so they would fit nicely in the elongated holes from a slot mortiser.’ And that’s just what a PantoRouter can do, along with other things such as cutting finger joints and dovetails. In fact, according to the makers of this machine, ‘the uses are limited only by your imagination.’ 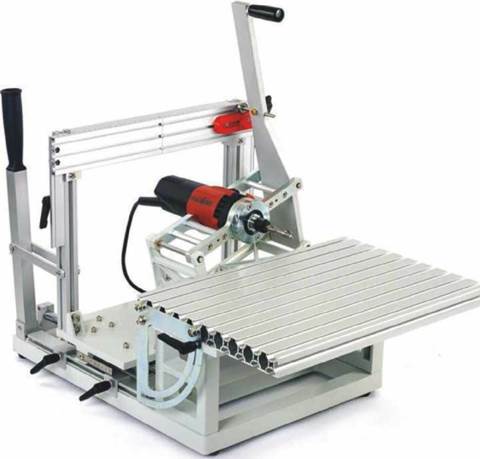 I should perhaps confess at this point that I’m not naturally drawn to machines that do things like cutting dovetails; I still get a certain satisfaction from cutting joints by hand, but I do use a biscuit jointer, a mortiser, a Domino, a router table, and a whole host of other woodworking machinery, so this blend of router and multiple mechanical linkages that’s going to effortlessly cut, among other things, accurate mortise & tenon joints – one of the trickier joints to cut with precision – has certainly got my attention.

If you were to buy one of these machines, it would arrive part-assembled. My test machine arrived complete so I didn’t get involved with assembly, but there are good step-by-step instructions, with photos, and it all looks pretty straightforward.

My first impression of the PantoRouter was that it looked like it might have been a Heath Robinson creation – there’s a sea of extruded aluminium, Bristol levers, handles and linkages, some bits are hinged, some bits slide, lots of things move in different directions, and nestling in the middle of it all is a small Mafell router.

Having assembled the PantoRouter, there are some easy to follow instructions on how to set the machine up using a centre point fitted in the router collet, and some centrelines to draw on the table, so the cutter knows where it is.

The basic idea of this machine is that, being a pantograph, it is able to copy things – in this case it copies the shape of templates that are mounted on the vertical ‘template bar, and it replicates 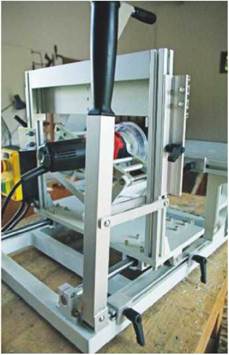 The PantoRouter Pro, once assembled 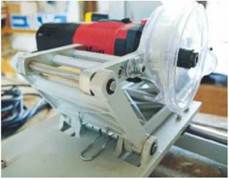 Mafell router nestling in the middle of the pantograph linkages 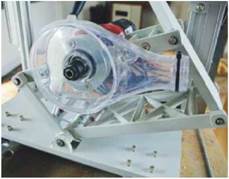 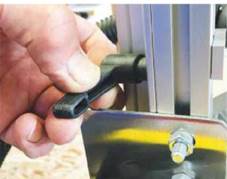 Annoyingly, some of the Bristol lever adjusters clash with other components

them at a scale of 2:1 – i.e. the thing it produces is half the size of the template. There are plastic templates and cutters supplied with the machine for making various different joints and, if you’re feeling adventurous, you can, of course, make your own templates. Having mounted your chosen template on the template bar, and your workpiece on the horizontal table, the depth of cut and centreline of the joint can be set and the joint cut, which all seems very uncomplicated.

The stated aim of the inventor of this machine is that it should cut accurate mortise & tenon joints. It should be good at these, then, so that’s the joint I went for. Suitable template installed, workpiece clamped onto the table, the instructions informed me to install a 10mm cutter and a 10mm bearing guide for a 10mm mortise & tenon, which all seems very simple and intuitive. The 10mm joint was a bit big for my 18mm workpiece, the mortise a little wide really, so a 6mm joint with 6mm either side might be better, but I decided to stick with the instructions – after all, this was my first attempt at a joint using this machine. With everything set up, I went for my first cut. The bearing follower is located in a slot in the centre of the template. With dust extraction and router switched on, 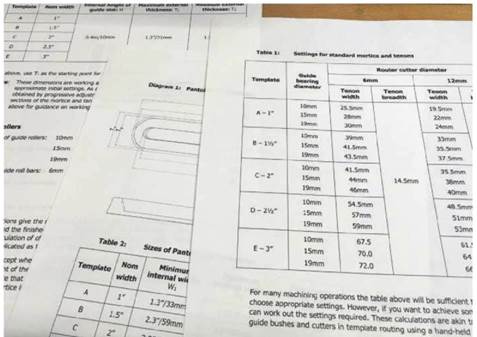 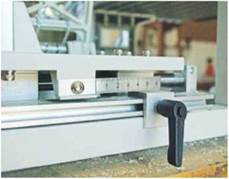 The depth stop is very simple to adjust and lock 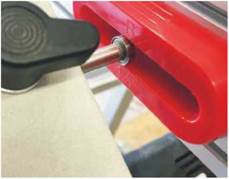 To cut a mortise, the bearing-guided follower is positioned in the centre of the template 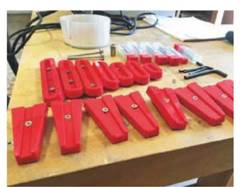 Templates and cutters for mortise & tenon and dovetail joints

there are two handles that control the router cut: one uses the pantograph linkage to follow the shape of the template and the other plunges the router cutter into the workpiece to the set depth of cut. This all makes complete sense, but now for the clever bit: with the mortise complete, it’s time to cut the other half of the joint, so with the rail clamped to the table, against the simple squaring fence, the bearing follower is moved from the slot in the centre of the template to run around the outside, thus giving a matching tenon. The outside of the template is tapered – a really clever way of fine-tuning the size of the tenon – and to do this, just re-position the bearing follower on the wider or narrower part of the template for a slightly bigger or smaller tenon.

The process for a 10mm mortise & tenon is really quite easy, so how good is the joint? Not bad at all. Everything is nice and crisp, but it had been cut at a very slight angle, which meant that the shoulder of the tenon was very slightly gappy on one side and the rail headed off at a slight angle to the stile – not really what I would have expected and I’m sure this is something that could be sorted, perhaps with a bit of shimming to the main table. 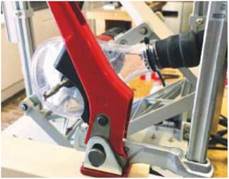 So what happens when you want to cut a joint other than a 10mm mortise & tenon? As mentioned earlier, for an 18mm thick component, a 6mm mortise & tenon seems more appropriate, but at this point the elegant simplicity of the PantoRouter seems to evaporate: a 6mm cutter will work for the mortise but it won’t work for the tenon. Tables must be consulted to choose the correct combination of guide bearing, template and cutter, and if you want a specific size that isn’t in the table, you need to use an equation and perhaps buy a specific cutter size. Things would probably become a little simpler if you just used the machine to cut elongated mortises and used Dominos instead of cutting tenons, but this is not quite the aim of the inventor and, of course, a Domino machine cuts mortises for Dominos with an understandable self-assurance.

The PantoRouter is a really clever concept, but I’m left a little confused as to what it wants to be. If I wanted a machine to quickly, simply and accurately cut mortise & tenon joints with 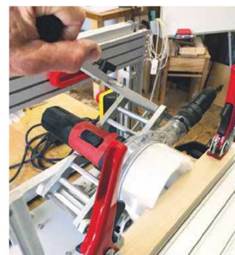 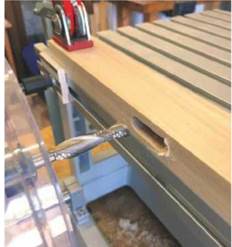 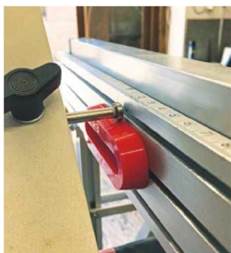 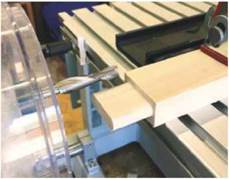 elongated ends, the obvious choice would be a Domino machine. Of course, the PantoRouter is able to do many other things like dovetails and finger joints, but there are already many router-based dovetail jigs on the market, and a router table is pretty efficient at cutting finger joints, which leaves all those other projects that are only limited by your imagination. My conclusion is that if you have an engineering brain, you love maths and an equation like ‘WT = (W3+R)/2-D’ is something that fills you with joy, and if you really want to get involved with predominantly machine-based woodworking,

the PantoRouter would be absolutely perfect for you. There is an excellent book of instructions and it would give you endless hours of enjoyment. And, obviously, regular use would allow you to really get to grips with what it’s truly capable of, but the ‘Pro package’ is heading for £ , and this is a serious investment that could, for example, buy you a decent bandsaw or planer/ thicknesser, which leads me to think that it might not be the best choice for a woodworker who likes to make things using hand skills, with the help of a few power tools, which are cheaper and perhaps rather more straightforward to use.

What’s in the box?

•      Fine-tuning of templates tightens the accuracy of mortise & tenon joints

•      Construct your own templates to make almost endless custom joints

•          Good solidly built table, router mount and linkage; easy to change cutters; clever system for centring the cutter and easily adjusted depth stop; quick, effective clamping with Bessey clamps; could be very versatile and an exciting new, machine-based, way of woodworking for someone who likes a bit of maths with their joints

•          Some Bristol levers are a bit cramped and close to other components; rather complex setup involving equations and tables; represents a significant financial investment 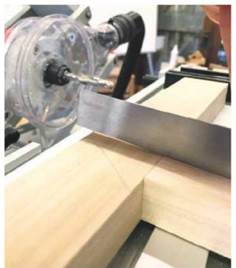 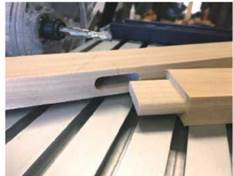 The result is a nice crisp mortise & tenon joint