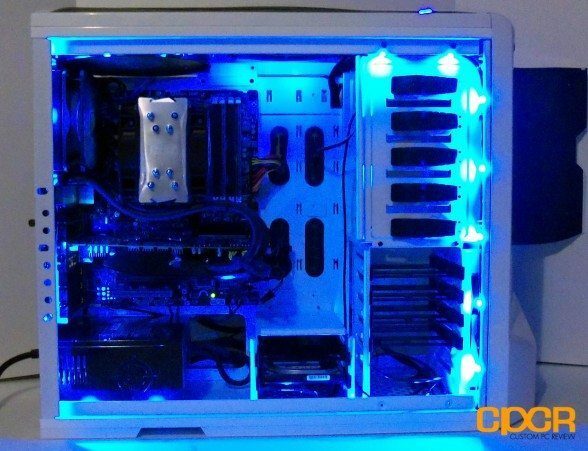 If you’re keen on lighting up your PC, you probably have a few sets of LED strips or cold cathodes in a drawer somewhere. The trouble is that as soon as you change PC cases or hardware, these lights invariably end up clashing with your new parts’ colours. Similarly, standalone kits usually have limited lighting functions. However, NZXT reckons it has the answer with an update to its HUE programmable lighting system, called the HUE+.

The system consists of a 2-channel hub that can connect via a motherboard USB 2 header using an included cable, or externally using a standard micro–USB cable, and it’s powered by a single Molex connector. Four 11cm LED strips are included; these can be daisy-chained into one continuous strip in single-channel mode, thanks to male and female connectors on either end, and they connect to the hub using 50cm proprietary connector cables – one for each channel port on the hub. What’s more, the strips have self-adhesive pads for aluminium or plastic surfaces, but also sport built-in magnetic strips for clean and easy mounting to magnetic surfaces. There are also two 10cm, one 30cm and one 50cm extension cables, which can either sit between sets of LEDs strips to space them around corners, or they can simply provide further reach and help hide cables out of sight. Mounting the hub is easy; four screws are included that enable you to install it in a spare 2.5in bay, as long as the bottom mounting points are accessible, but it’s light enough to mount with double-sided sticky pads or Velcro. Once powered, the hub emits a subtle white light but otherwise, it’s very inconspicuous. The key to the HUE+, however, is NZXT’s CAM software suite, which gives you control over the lighting of both channels. Usefully, the LED strips are hot- swappable and detected in the software as soon as you connect them, which makes fitting them into your case in the right position a simple task. You can select from the usual fixed, breathing, marquee or RGB spectrum wave modes, or have each channel respond to CPU or GPU temperature, with colours for the latter configurable in 10°C steps between 20°C and 100°C. There’s even the option to have them respond to your frame rate in games. You can also set specific LEDs to certain colours and fiddle with the colour cycle in the preset modes. There’s an audio mode too, although it’s currently still in beta status, which may explain why it wasn’t particularly responsive, even when thumping out some AC/DC. You can also set the lights to a single colour, including white, if you’re not fussed about any of the effects. Most importantly, the LEDs are super-bright, and with four strips, it’s easy to illuminate a large case. With 30cm LED strips retailing for between £5-10 each, including four of these strips as standard, along with several extension cables, this already means the HUE+ isn’t bad value. However, the inclusion of a fully programmable hub and software suite with per-RGB LED tweaking all for under than £50 inc VAT is quite a feat. It’s a niche product, of course, and we’d make like to see more presets – it would be easy to implement a Knight Rider, for example. If you want to pimp out your pride and joy at the next LAN event, though, or simply want to own a single set of LED strips that you can colour-match to current and future systems, the HUE+ is exactly what you need. ANTONY LEATHER