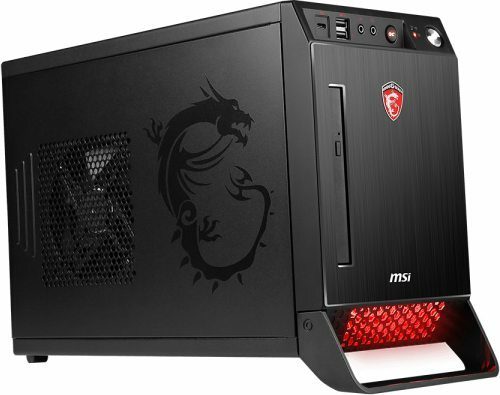 Many barebones PC kits feature an ultra-compact or exceptionally slim design that doesn’t leave room for full-size graphics cards. The GPU limitations mean that most barebones kits are relegated to home office duty. MSI’s Nightblade X2 is a different breed of barebones kit that supports a dualslot GPU up to 290mm long—enough space to fit a GeForce GTX 980 Ti. With that said, we imagine power users who’ve built their own gaming rigs might question why someone wouldn’t just pick all the off-the-shelf parts for complete control over what goes into the build. MSI designs the Nightblade X2 inside a compact mini-ITX case, so it’s much smaller than a conventional gaming system. MSI also optimizes the layout and cooling to ensure peak performance. Accomplishing the same precision in a DIY build would require lengthy component consideration.

The “barebones” of the Nightblade X2 includes a mini-ITX case, a 500-watt PSU, a specially-built Z170 chipset motherboard, a slim-tray DVD burner, and a Killer Wireless-AC 1535 wireless adapter. The preassembled kit is a strong base configuration for a gaming rig. The PSU, for instance, delivers enough juice for one high-end graphics card and meets the 80 PLUS Silver certification. We also like that the Z170 chipset supports up-and-coming hardware, such as DDR4 and PCIe SSDs, while also providing compatibility with Intel’s new 6th generation Skylake processors. The proprietary Z170 motherboard boasts some of the best onboard capabilities of MSI’s GAMING motherboards. For example, it comes with a Killer E2400 NIC and its Advanced Stream Detect 2.0 network acceleration. Right out of the box, Advanced Stream Detect 2.0 monitors your network for game and multimedia traffic, and it prioritizes bandwidth to those applications above background programs. Within the Killer Network Manager, you can also customize traffic prioritization for individual programs installed on your PC. The Nightblade X2 offers some mighty wireless capabilities, too, thanks to the built-in Killer Wireless-AC 1535 adapter. It supports the latest 802.11ac performance features, including MUMIMO (Multi-User, Multiple Input, Multiple Output) and beamforming that can significantly improve signal range and bandwidth—when used in conjunction with routers that support those features. Best of all, the Nightblade X2 supports Killer’s Doubleshot Pro technology to assign network bandwidth to both the wired and wireless NICs. For example, you could devote the wired connection’s bandwidth to your video game, while the wireless connection can handle your VoIP or game broadcast applications. It’s clear that MSI had power users in mind when designing the case. There’s an OC Genie button the front panel to let you instantly overclock system internals, including the CPU. The front panel also features a USB 3.1 Type-C port, as well as two USB 2.0 ports for convenient mouse and keyboard connectivity. MSI even built a carrying handle into the case, so it’s easy to tote into a LAN party. To keep the system cool, MSI designed the Nightblade X2 so that cold outside air enters through the front and bottom vents, while hot air exits via vents in left side, rear, and top panels. Ideally, you’ll want to select a GPU with an openshroud heatsink, rather than the blowerstyle closed-shroud, because the GPU is located directly above the case’s bottom vents. It’s a perfect spot for pulling in cool air. A vent on the right side panel allows for the PSU to bring in cool air, as well. Beneath the left side panel vent, MSI provides a 120mm fan bracket for additional ventilation for system internals. With the Nightblade X2’s base in mind, you can now select your Skylake processor, CPU cooler, GPU, DDR4 memory, storage, and OS. The specialty Z170 motherboard features two DIMM slots where you can install up to 16GB of DDR4-2133. Storage options are plentiful. You can install up to two M.2 PCIe SSDs, two 2.5-inch drives, and one 3.5-inch HDD. One of the M.2 drives can be installed on the back side of the motherboard, while the other sits beneath the GPU. For the CPU cooler, a tower cooler is likely your best option, unless you want to modify the X2’s side panel to hold a 120mm radiator. Based on our measurements, a heatsink/fan combo shouldn’t be taller than six inches or wider than five inches to comfortable fit inside the Nightblade X2. MSI sent us a Nightblade X2 decked out with an Intel Core I7-6700K, an MSI GTX 970 GAMING 4G, 8GB of SK Hynix DDR4-2133MHz, and Samsung’s 128GB SM951. The seriously powerful mini-ITX build showed its stuff in our benchmark tests. For instance, support for Intel’s flagship Skylake CPU allowed the Nightblade X2 to perform well in our processor-intensive tests. The rig posted a score of 851 points in Cinebench 15 and 1,884.98 pixels per second in POV-Ray 3.7. The inclusion of a GeForce GTX 970 makes this Nightblade X2 a great gamer, too, as it posted better than 30fps in all of our games tests—highlighted by 65fps in Dying Light. Those planning on adding speedy storage should take a peek at the CrystalDiskMark 5.0.2 benchmarks, which include an off-thecharts Sequential Read (Q32T1) rate of 1,956MBps. If you’re in the market for a compact PC and don’t want to start the build process from scratch, the Nightblade X2 is an excellent starter kit. The price of $399.99 is right around what we’d expect to pay for Nightblade X2’s provided hardware. We also like that power users still have the freedom to select the build’s primary components. It’s one of the few barebones kits we’ve seen that’ll do for enthusiasts. Processor: Intel Core i7-6700KMotherboard: Proprietary (Z170 chipset)RAM: SK Hynix 8GB DDR4-2133 (HMA41GU6AFR8N)Storage 128GB Samsung SM951, 2TB Seagate Barracuda.