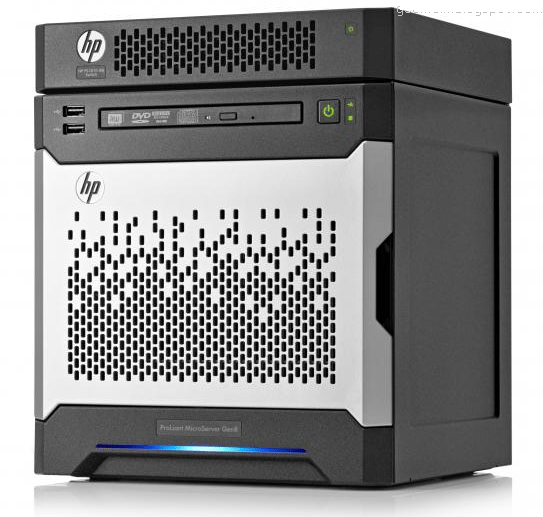 Back in 2012, I covered the HP ProLiant N40L MicroServer. It cost less than £200 for the most basic model.
The HP ProLiant Gen8 G1610T is a modern equivalent and can be had for an astoundingly low £124.99 after cashback from HP.

I still use the N40L, and unpacking the G1610T revealed lots of similarities, but there are also significant enhancements that HP has made over the past three years.

Physically, this is marginally shorter than its predecessor but roughly the same in almost all other dimensions.
The common ground is four SATA bays (not hot-swappable) mounted in a cube chassis with the motherboard mounted in the base. This model has a space for a slimline optical drive mounted in the top, but it isn’t included as standard, and there are also no SATA hard drives included by default either.

What you get is a motherboard with a dual-core Intel Celeron G1610T (2.30GHz 2MB 35W) pre-installed and 4GB of DDR3 RAM. To become fully operational you’ll need drives (up to four can be installed) and the usual collection of peripherals, such a mouse, keyboard and monitor.

What you also don’t get is an OS, so those wanting Windows Server will have a much larger bill for that option, though you could put FreeNAS on it at no cost whatsoever.

One thing I noticed from the outset that’s a vast improvement over the N40L is the organisation of the motherboard tray and general access to it. Previously, the tray came out of the front, but it required you to almost entirely de-cable the board before it would move.

While some cables still need removing beforehand, it now slides out of the back, not the front. Best of all, it isn’t really necessary to move it in order to add a card to the single lowprofile PCIe x16 slot or upgrade the RAM.

The N40L was also exclusively USB 2.0, and this machine has a couple of USB 3.0 ports, though the total number of ports remains unchanged at seven.

HP no longer includes an eSATA port, but the motherboard does now have a micro-SD card slot, from which it’s possible to boot an installation or recovery.

But the biggest connectivity changes are in the networking departments, because the ProLiant G1610T has two 1Gbit

LAN ports that can be aggregated on an appropriate switch, and also iLO4 LAN socket. That last feature is something unique to HP server, and it provides an independent back channel for server management tools to control the machine. The iLO or Lights Out remote management controller is part of the standard hardware and could be a godsend to anyone with lots of hardware to manage remotely using just a browser. 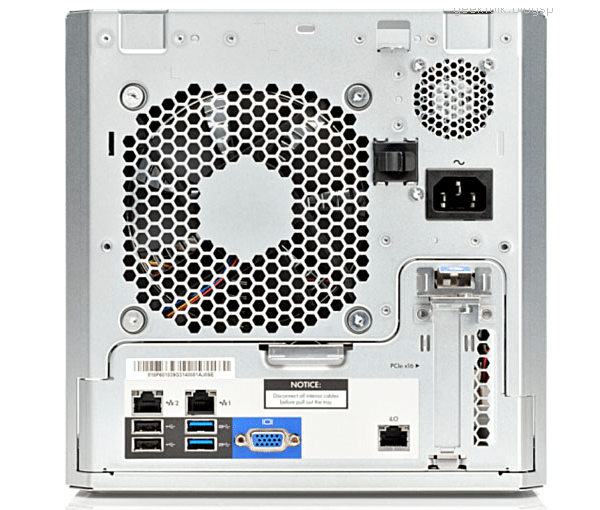 In performance terms, the Celeron G1610T isn’t a huge leap from the AMD Turin II that HP used before, although for general file serving, there’s sufficient power to service standard office clients.

The only downside to this choice is that at 35 watts, this MicroServer uses more than double the power of the 1.5GHz Turion II before it and even more than the 2.3GHz Turion II that HP used in the N54L.

As for obvious improvements in the next generation, HP needs to finally embrace hot-swap drive trays, and it needs a drive controller that can do 6Gbps on all four slots, not just two, for when people switch to using SSDs instead of hard drives.

It also features a conventional BIOS and not a UEFI for configuration changes. Yet my only really irritation is how noisy the internal fan can get if the system gets hot.

I put the fan excesses down to the passive CPU cooler HP used on the Celeron that needs some circulating air to do its job.

None of these aspects undermine HP’s MicroServer concept as presented by the G1610T, because it’s generally specified with this specific use in mind and not the job of being a general purpose PC.

Even with the Celeron CPU in the review model, this is a really serious piece of server kit which, given the addition of appropriate drives, can be deployed as a made-for-the-job file server in any small office.

After you’ve added some drives and an OS, this might not seem quite as much of a bargain, but for technology that was designed for this file serving function, it’s still remarkably cheap, even when compared with NAS boxes.

A small file server that’s built precisely for that job.