Musical Fidelity brand. Armed with ears and test gear, we track the M8xi to its lair…

If you are into fancy-looking hi-fi with machined fascias and decorative meters then the M8xi integrated amplifier is not for you. ‘Sorry, that’s the way it is’, says Musical Fidelity, though I suspect this declaration of intent for the entire M8 series owes more to Musical Fidelity’s founder than the new owners, Audio Tuning Vertriebs GmbH, of which vinyl evangelist Pro-Ject Audio Systems is another division.

So ‘Made in Wembley, England’ is now replaced by ‘Made in Austria’ on the packaging even though the engineer behind some of MF’s earlier and iconic big amplifiers, Simon Quarry, has returned to deliver us more than a taste of the old Musical Fidelity magic in this new M8xi integrated model. The promotional flyer for the M8xi reminds us that MF’s journey into the realm of the ‘super integrated’ began way back in the early ’90s with the A1000 [HFN May ’93] although, in practice, what it describes as ‘the latest and best of the breed’ arguably owes as much to the design of its more recent, very high output power amplifiers [see boxout, p41].

Whatever its heritage, the M8xi is certainly big and weighing in at some 46kg it’s not especially comfortable to hump about if grasped by those effective but utilitarian heatsinks. Siting the amplifier takes some thought too as the M8xi is a full 485mm wide, 180mm high and 500mm (that’s half a metre) deep. Big? It’s a beast!

Rated at a not inconsiderable 550W/ 8ohm per channel, but capable of rather more [see Lab Report, p43], the high (67V) voltage output is achieved by bridging a pair of output stages, the two ‘sides’ of each mono bridge comprising three pairs of high-current power transistors. This is not a new solution for Musical Fidelity, its 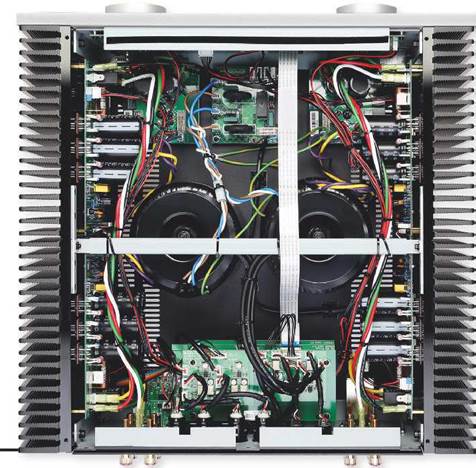 engineers having refined this balanced/ bridged output topology, with a trick or two of their own, for well over a decade. Nevertheless, because the red and black speaker terminals are floating, care needs to be taken not to connect the M8xi to a powered/earthed loudspeaker, or certainly not before consulting your dealer.

Otherwise, scale notwithstanding, the appearance and features of this dual-mono integrated amplifier are all by-the-numbers. Two huge rotaries dominate the extruded alloy fascia, catering for input selection and volume, while the results of each are indicated on a bold central display. There’s no headphone socket here as Musical Fidelity would probably rather you bought its separate MX-HPA preamp [HFN Apr ’15], but if the front panel looks a little

sparse then that’s because all the real action is hosted at the rear of the chassis and via the M8 series remote [p43].

Inputs extend to four single-ended on RCAs, including one HT bypass, and two balanced on XLRs – even the preamp outputs are both single-ended and balanced. There’s also a fixed RCA line output and two sets of very substantial 4mm speaker cable terminals to service partnering loudspeakers with split/bi-wire crossovers.

Meanwhile digital files up to 192kHz/ 24-bit are accommodated on pairs of coaxial and optical S/PDIF connections plus a single asynchronous USB-B port. Musical Fidelity’s choice of DAC, the TI/Burr-Brown PCM5242, is part of that company’s perhaps, neither is there an MM/MC input, but then, once again, Musical Fidelity and Pro-Ject combined have more than a few outboard phono preamps to keep you busy.

‘DirectPath’ series of monolithic converters (its small VQFN package ideal for use in smartphones), but the chip does not support DSD. Hence, neither does the M8xi which rather puts it on the digital back foot if you’re the kind of audiophile with a big library of very high-res DXD and DSD music files. On the other hand, you might view this USB input as an optional extra rather than a core feature – the M8xi is all about power, lots of power, not digital audio after all.

The M8xi, sitting toasty warm behind me, immediately went about the business

It’s been my experience that the best audio engineers not only have great production skills but also have an instinct for how circuit layout and component choices will impact on the subtleties of sound quality. Simon Quarry has proved his worth in the past, so I’m glad to say my expectations for the M8xi were fully

ABOVE: Flywheel-effect input and volume knobs are both rotary-encoders while the large display indicates source and level. It is difficult to gauge the sheer size of this 46kg integrated from a pic!

of demonstrating what a truly powerful and capable amplifier it is – cueing up Massive Attack’s ‘Unfinished Sympathy’ (what else?) [Blue Lines 2012 Mix/Master; Wild Bunch Records, 96kHz/24-bit] had those rigid sandwich bass cones reach down as low and far as they might without popping the end stops. Nelson’s voice soared, the sampled bass and percussion powered and sparkled in turn while the orchestral strings – recorded at Abbey Road Studios – possessed all the lush richness that I’ve come to expect from this track when played to its fullest.

Fortunately this is no one- trick pony. Sure, the M8xi sounds ‘big’, boasting tremendous weight, extension and a pneumatic grip over bass notes that powers the deepest rhythms through your rib cage and beyond, but its repertoire is both more varied and extensive in its resolution of colour, timbre, dynamics and ambience.

PEDAL TO THE METAL

Most striking is this amplifier’s speed as transient details fly from the speakers with a fleetness that you’d perhaps not anticipate from a great lump of an amplifier. The M8xi isn’t just heavy, it’s also fast… This combination of weight, scale and zip is beautifully illustrated by the truly massive orchestra that powers the drama of Wagner’s Symphonic Ring [Duisburg Philharmonic/Darlington; Acousence ACO21309, 192kHz/24-bit]. Recorded with Neumann mics, Apogee converters and a

If you want to trace the genesis of the M8xi then look no further than Musical Fidelity’s Titan power amp [HFN May ’10], pictured here. This bridged power amp delivered 1050W/8ohm and 1996W/4ohm with a dynamic output of 5900W/1ohm (76.8A). Sure enough, the M8xi’s dynamic delivery of 880W, 1740W and 1300W into 8, 4 and 2ohm is lower, and its 26.8A current capacity deliberately limited, but key features of the design are carried over. While the M8xi’s output stage uses a newer version of Sanken’s STD03N/03P Darlington power transistors (with built-in compensation diodes) it shares an idea from the Titan: each transistor is powered via its own dedicated 4700pF/80V reservoir capacitor. With three pairs of transistors per side of the bridge, or six pairs in total per channel, this gives 12 reservoir caps per channel, and these black/grey cans are clearly visible in our lid-off shot [adjacent, p40].

The preamp and digital circuits owe more to MF’s Encore 225 streaming amplifier [HFN Dec ’16] though the M8xi’s USB input is a superior XMOS-based implementation. The ‘Encore’ line preamp has an improved layout in the M8xi and now has both balanced inputs and outputs even though, in practice, the preamplifier is single-ended in design. And that huge volume knob does not drive an analogue potentiometer – it’s a rotary encoder (with no hysteresis, I might add, so spinning it quickly does not speed the volume change up or down) linked to a digital-governed volume control from Texas Instruments. PM

ABOVE: Five line ins (three on RCAs, two balanced on XLRs), USB-B and pairs of coax/ optical digital ins are joined by balanced and single-ended pre outs (XLR/RCA), one fixed line out (RCA) and coax/optical digital outs. There are two sets of floating (live negative and positive) 4mm speaker outlets per channel for easy bi-wiring

Merging Pyramix workstation, this fabulously detailed rendering finds harps and flutes still tonally vivid in a sea of strings stirred by no fewer than 30 first and second violins.

Multiple tympani and percussion underpin this ambitious festival of sound and through it all the M8xi keeps its cool, resolving the lyrical simplicity and delicacy of ‘Forest Murmurs’ with the same deft touch that it develops the scene of deep, fast-flowing water in the Das Rheingold Prelude. I have heard this soundscape sound grander still, but only with the likes of D’Agostino’s Relentless monoblocks, masterworks in their own right [HFN Mar ’20], but from an integrated? Never.

The M8xi is versatile too. As

Diana Krall sashays her way through The Eagle’s ‘I Can’t Tell You Why’ [Wallflower; Universal/Verve 4701861, 48kHz/24-bit] the M8xi sheds its bulk and gets into the swing of things, lifting this vaguely melancholic ballad by illuminating both the brushwork percussion and accompanying piano.

This album had a very mixed reception from the critics on its release in 2015, not least because there’s little sign of the fireworks

Krall has brought to bear on some of her previous outings. But here the depth of detail, and seemingly natural composure of the performers in what is a very relaxed acoustic ensured the album was rarely less than captivating if not especially invigorating.

Faithful to the tone of the message, perhaps, but not ideal listening for the times…

Nevertheless this was one of many albums I used to compare the sound of the M8xi through its analogue XLR and digital USB inputs, via a Melco N1ZS20/2 server [HFN Jun ’17] and dCS Vivaldi One player/DAC [HFN Feb ’18]. Simply put, the M8xi’s USB input is good, very good, but an external high-end DAC will still have the edge, revealing the M8xi, in purely analogue guise, to be capable of a slightly more insightful sound with deeper, darker backgrounds and a subtlety that belies its brutish, no-nonsense apparel.

So the brush-like percussion from Carman Lundy’s Self Portrait [JVC Victor VICJ-5152; ripped from K2 CD] is not a million miles off that from Krall’s album, but in both cases the analogue input saw the M8xi paint performances that were just that bit smoother, more liquid in tone and delivery. Free of stress, strain or any suggestion of subliminal background hash, the sound was both inviting and enveloping, spilling from the speakers and washing away minutes and then hours of my listening time. Not that I was complaining.

If you're of the persuasion that no amount of power is ever enough, or perhaps simply want to future­proof yourself against the unlikely purchase of impossibly insensitive speakers, then Musical Fidelity's M8xi is your man. But this integrated amp, bluff exterior and all, is not only capable of driving a short piece of damp string, but does so with a dexterity and fleetness of foot that utterly belies its bulk. Chalk one up to Austria.