Valves that glow green mark out Mcintosh’s hybrid integrated amplifier — valves in the preamp stage, transistors in the output stage. It’s a combination that brings magic into the home. Read our MCINTOSH MA252 Review. 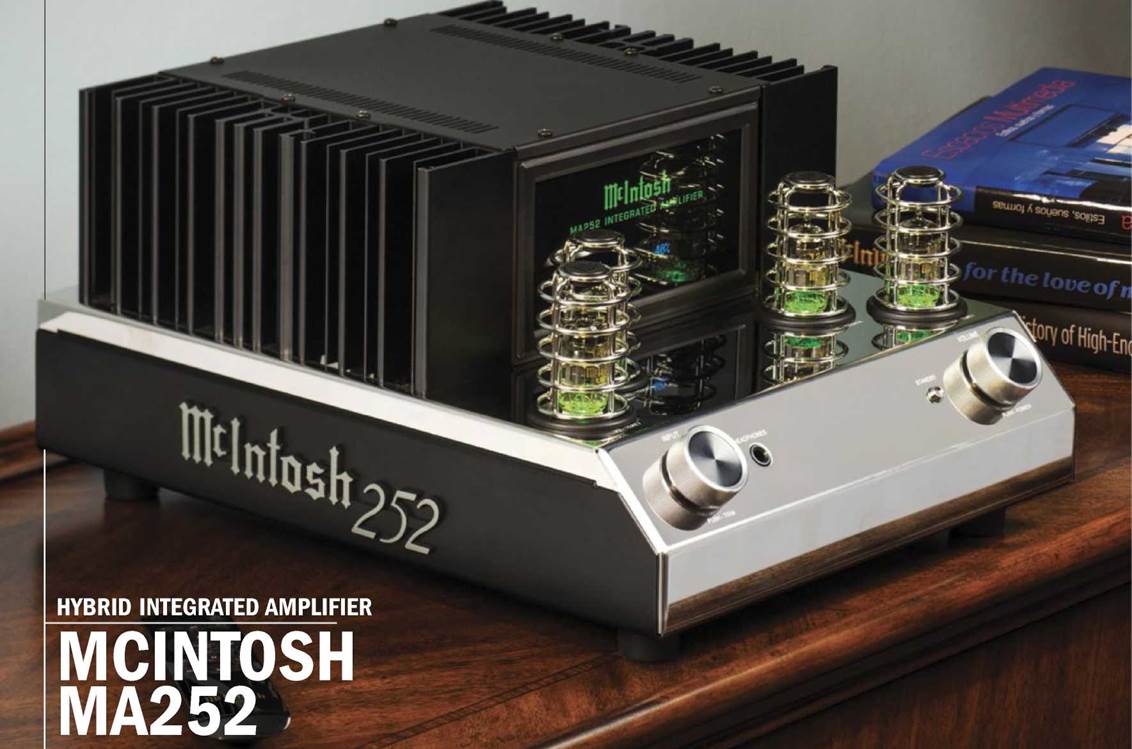 That’s an important statement given that McIntosh has been building amplifiers for 60 years. So the McIntosh MA252 has been 60 years coming. was it worth the wait?

But first, what is a hybrid integrated amplifier? Basically it’s a component where one of the two amplifying stages uses valves — or ‘tubes’ as our US friends like to call them — to amplify the audio signal, while the other amplifier stage uses transistors. Any integrated amplifier has two amplifying stages — the ‘pre’ and ‘power’ stages — so there are two ways to build a hybrid audio amplifier. One way is to use valves for the ‘pre’ section and transistors for the ‘power’ section; the other is to use valves for the ‘power’ section and transistors for the ‘pre’ section.

In the MA252, McIntosh has elected to use the former approach, employing 12AX7a and 12AT7 valves in the preamplifier stage, and transistors in the output stage. The reason McIntosh does it this way, rather than the other way around, is to attempt to achieve the best of both worlds: the sweet sound quality that’s inherent in valve amplification and the very high power output that transistors make possible.

But wait! Isn’t it possible to get high power output from a valve amplifier stage? Of course it is. and no-one knows this better than McIntosh. After all, its MC2301 valve amplifier is rated with an output of 300W into 8 ohms. But achieving such high power output using only valves costs money. and lots of it. That McIntosh MC2301 currently retails for $ and you need two of them for stereo. This MA252, on the other hand, is rated at 100W per channel into 8 ohms (160W per channel into 4 ohms).

Of course using transistors rather than valves in the output stage means that you miss out on one advantage of using valves, which is that it’s extremely difficult to drive them into hard clipping. Valves have an inherent ‘soft clipping’ characteristic when they’re overdriven that can actually make the sound quite attractive. (Which is why many guitar players use valve amplifiers with special ‘overdrive’ circuits.) To circumvent this, the high-current transistors McIntosh uses in the output circuits of the MA252 are monitored by McIntosh’s patented ‘Power Guard’ circuitry which monitors the output signal for any signs of overdrive and makes real-time micro adjustments to the input signal to prevent the output stage from being driven into clipping. You will know if the Power Guard circuit is operating, because when it does, the colour the valves are glowing changes from green to orange.

“If you’re wondering why McIntosh uses a lot of green on their products, it’s because that’s the primary colour used in the McIntosh tartan worn by founder Frank McIntosh’s Scottish forebears. ”

At this point we can see valve aficionados scratching their heads, because when they’re operating, valves glow an orange-reddish colour, not green. The valves in the MA252 glow green simply because McIntosh has fitted chameleon LEDs underneath them, which emit a green glow that’s bright enough to outshine the glow of the valve heater, but when the Power Guard circuit triggers, the LED colour changes from green to orange. There’s one Power Guard circuit per channel, so if only one channel is clipping, only that channel’s two valves will change colour. If both channels are clipping, all four will glow orange.

And if you’re wondering why McIntosh chose green, and uses a lot of it on their products, it’s because that’s the primary colour used in the McIntosh tartan worn by founder Frank McIntosh’s Scottish forebears. This green has been used on all McIntosh products since 1949.

We were really pleased to discover that McIntosh has included an input trim circuit that allows you to adjust the sensitivity of the inputs to exactly match the output of whatever component you’ve connected, so that when you switch from one input to the other, the volume will stay the same. Unlike some such circuits, which don’t offer much of an adjustment range, McIntosh’s trim circuit has a full 12dB of adjustment available… and in precise 0.5dB steps too.

The first thing we realised after we’d finished the hook-up and switched the MA252 on is that it has a fantastic-looking OLED front panel display, which shows the amplifier’s model number and the words ‘Tube Warmup’ while the amplifier is warming up (which takes 15 seconds), after which it shows the source selected (which will be your last-used source), and after that the volume level slowly ramps up from zero to stop at whatever volume level you were last listening. While the amplifier is warming up, the LEDs illuminating the small signal valves glow orange, so when they turn green, you’ll know the amplifier is ready to go.

The second thing we realised (though only after a few days) is that the McIntosh MA252 ‘remembers’ balance, bass and treble settings independently for each input. So if, for example, you have adjusted the channel balance of the phono input to compensate for a slight voltage difference between your phono cartridge’s left and right channels, when you switch from your phono input to, say, your CD player on another input, the channel balance will revert to 0dB in each channel. Likewise, if you prefer to roll off the bass a little and accentuate the treble when listening to LPs, the McIntosh will apply these settings whenever you switch to the phono inputs, but revert back to a ‘Flat’ tone control setting (or whatever other tone control settings you’ve set) when you select a different input. This is a great feature. incredibly useful for day-to-day use.

The input selector on the left side of the sloping section of the front panel has a click-stop style action and in addition to selecting your desired input, it doubles up as the ‘Trim’ control (push it inwards for Trim options). If you hold the control pushed in for more than a few seconds, you skip past the ‘Trim’ options and it shows the amplifier’s model number, serial number and software version. On our sample, this last was V1.01.

The volume control on the right of the front panel has a beautiful ‘smooth as silk’ action. Pressing the control in activates the amplifier or puts it into stand-by mode. Rather confusingly, the small LED alongside it glows red both when the amplifier is operating and when it’s in standby.

The very first time we turned up the volume control on the MA252 it was to bring the sound of Lloyd Spiegel’s ‘Backroads’ up to a volume level that made our listening room sound like a ‘blues night’ at a small night-club. and if that’s the night you’re having, Lloyd Spiegel’s your man (though on this album he’s assisted by the other Spiegels, Marty and Riley, plus a gaggle of fine musicians, with the indefatigable Tim Burnham on drum duties). Right from the intro track, The Kick Around, which is more boogie than blues, we could hear we were in for a treat, with the McIntosh’s solid-state bits delivering solid, driving bass and beautifully-paced rhythmic drum sound while at the same time the tube-y bits were working their magic on Lloyd’s guitar sound, so that it was simultaneously clean and accurate, yet at the same time warm and alluring. On Bridges to Burn, one of our favourite tracks on this album, the warmth the valves bring to Levi Harkness’s bass is exemplary, yet at the same time listen to the drier sound of Burnham’s kit, while Lloyd’s voice is put right out front, just where it should be. 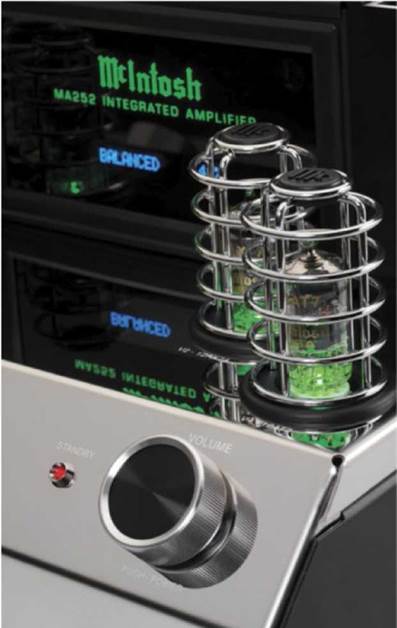 Then just listen to the absolutely stunningly- reproduced lead guitar solos on Christina, along with the acoustic and the backing vocals. The McIntosh never put a foot wrong, keeping a very tight grip on the PRaT while at the same time never once sounding clinical. if you’re looking for a definition of a ‘musical’ sound, the MA252 is it personified. And just listen to the way the McIntosh handles the complex rhythms on Candy Cane… fantastic!

A switch to heavy metal, in this case Stone Temple Pilots’ album ‘Stone Temple Pilots’ (the second and more recent) showed the band powering to even greater heights. The McIntosh MA252 proved easily capable of separating the myriad musical strands presented in STP’s work, and also capable of digging through the ‘grunge’ and delivering the impeccable underlying musician­ship. Lesser amps deliver STP as a ‘wall of sound’,

whereas played through the McIntosh MA252 the sound becomes multi-dimensional; you can simultaneously hear all the separate layers whilst experiencing the full aural image. Listening to STP always makes us crank up the volume, and the McIntosh had so much power on tap that we could crank it to ear-shattering levels without running into clipping, or without even the sound getting hard. and that lovely valve softness remained an underlying defining sonic signature. The lack of background noise from the amplifier was made shatteringly clear by the unexpected finale to Roll Me Under, which comes as a sonic wake-up call.

From blues to heavy metal to. classical of course, the forerunner of both, and to a true classic, Beethoven’s 5th, in the hands of Carlos Kleiber and the Vienna Philharmonic, which is likely the best recording of this work available. though we can’t say we’ve heard all of them. Carlos Kleiber was an enigma, a conductor who barely conducted, 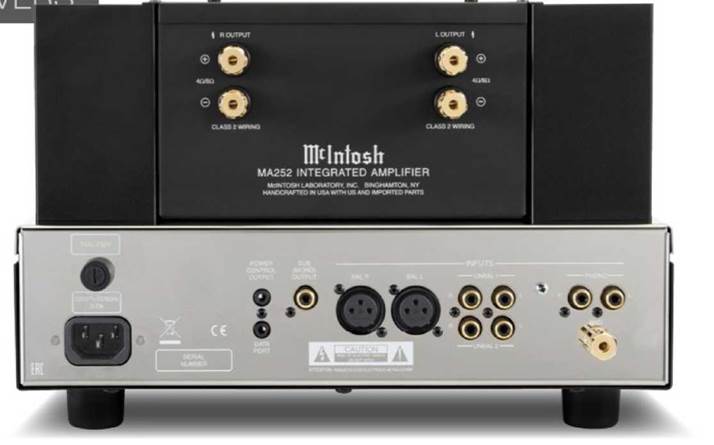 but when he did, wow! He could always bring out the best in any orchestra, and usually better than their best. You can hear this in this Fifth, and most particularly with the aid of the clarity of the McIntosh MA252 letting you reach into the soul of the music. The coup de grace is the superb acoustic of the venue and the quality of the DG recording itself, both revealed perfectly by the MA252.

When we wanted to test the tonal accuracy of the McIntosh MA252 with piano, the recording we played first was a favourite, Helene Grimaud’s recording of famous works by Bach (titled ‘Bach’) in the original and in transcription. Normally we like our J.S. unadorned, but for Grimaud we’ll make an exception, because her playing is like no other pianist we’ve heard. She doesn’t so much ‘play the notes’ as reveal the music behind the notes. She plays Partita No 3 (a Rachmaninov transcrip­tion) like a ballerina, her fingers dancing over the keyboard, while the way she plays the Busoni transcription of Chaconne in D minor is as if she’s a composer. Unreal. The recording and sonics are superb, and the McIntosh MA252’s sound puts the piano in the listening room. We ask for no more.

McIntosh has a reputation as an ‘aspirational’ brand — a brand everyone desires to own but few can afford to buy — and certainly products such as the aforementioned MC2301 and the simply stunning XRT2.1K speakers anchor that reputation in reality. Which makes the MA252 something special. It looks like a McIntosh. It sounds like a McIntosh. It’s built like a McIntosh (and in Binghamton, NY, like all other McIntosh products). But despite the fact it’s certainly aspirational, it won’t require you to aspire quite as much as most other products wearing McIntosh livery. Different, yet not different. and you know you want one. We certainly do! ■ 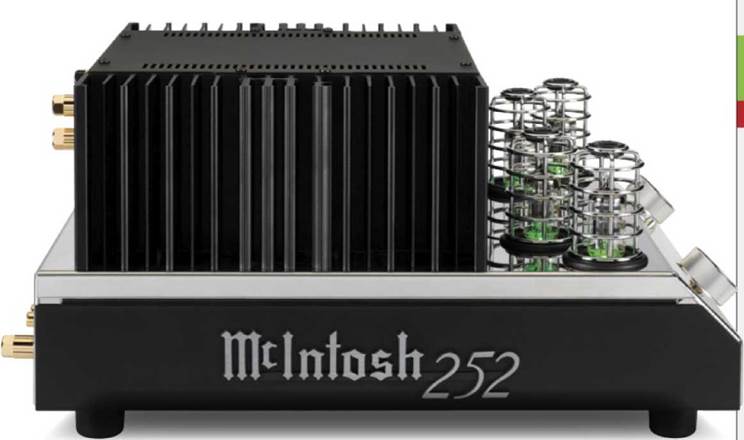 SaveSavedRemoved 0
We will be happy to hear your thoughts