Motherboards It might seem that your choice of motherboard is fairly straightforward; Intel or AMD compatible, depending on the CPU you are going to use. However, if you want to get the best out of your new PC, you really need to choose a motherboard based on your main usage aims. A gaming motherboard will offer very different features to one designed for general use or office work. Over the next few pages we will look at the many different motherboard options available to you. 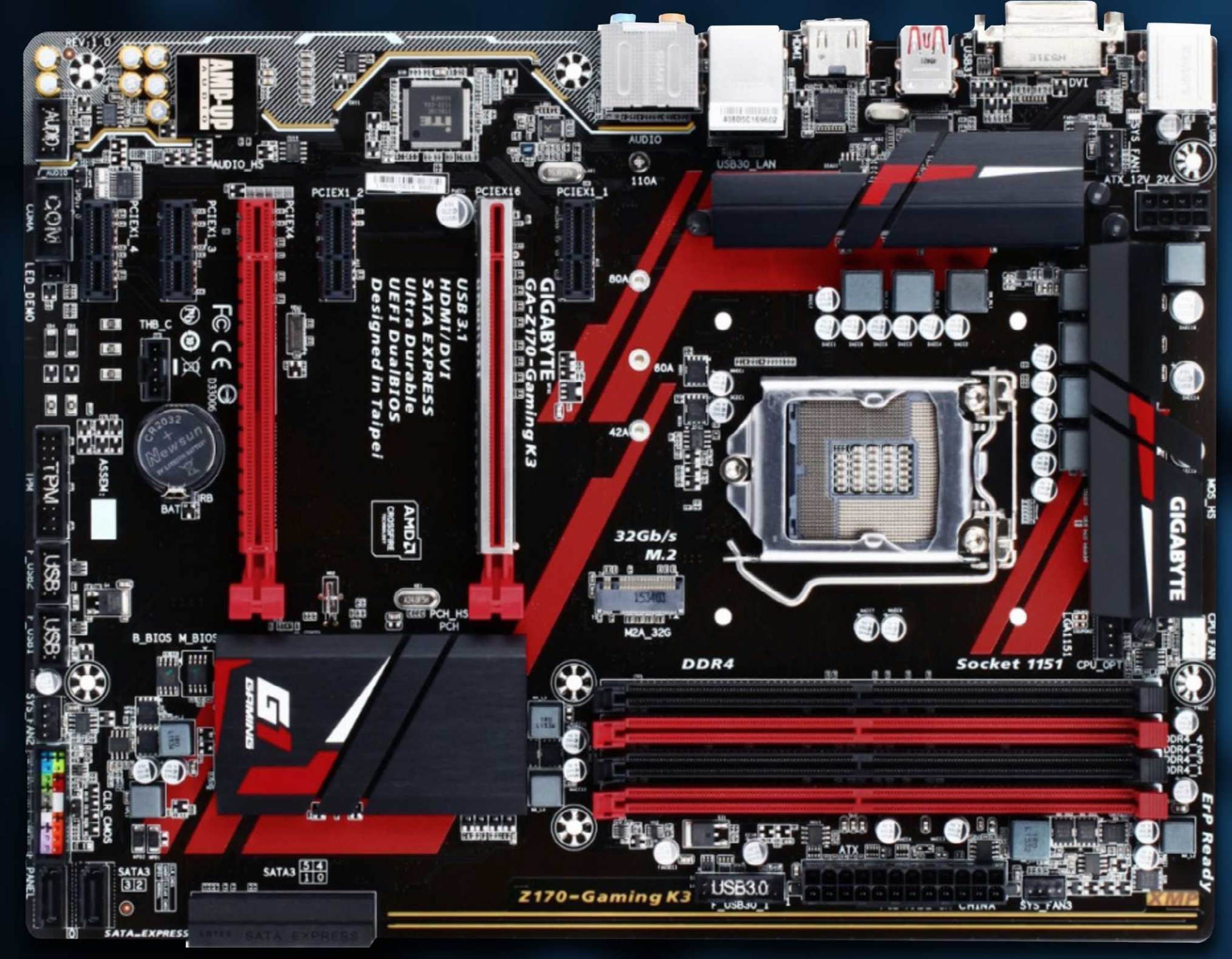 The motherboard (or mainboard) in your PC is the foundation of everything else you plan to add, so it makes sense to ensure you choose the best one possible.

Your only real choice of processor is going to be between Intel and AMD and so your choice of motherboard is going to be based initially, on which processor type you have decided to go with. Intel are the market leaders, with the fastest and most powerful processors among their range. However, AMD make some very good processors and they tend to be considerably cheaper; so if you are on a very tight budget, this could be an option. Once you have decided which to use, your search for a motherboard can be narrowed down slightly.

Although all processors might look, on the outside, pretty identical they are almost continually being improved and updated, and will only fit into certain sockets. Once more your motherboard choice is going to be dictated by the processor you plan to use.
We are using an Intel Core i5-6600K processor in our build, so our motherboard had to have an LGA 1151 socket. It wouldn’t have fitted into the slightly newer LGA 2011 socket used by an Intel Core i7-6800K. AMD use a different but similar system.
Here your choice will be between AM1, AM3+, FM2 and FM2+. Whichever you go for, make sure the motherboard socket matches your CPU, or it will be an expensive mistake.

Assuming you have chosen to build with an Intel CPU, the next step to narrowing down your motherboard search is to choose a chipset. A chipset is simply a set of electronic components in an integrated circuit, so chipset types are really just a way of denoting different combinations of motherboard features. Choosing between them is usually about what you plan to use the PC for mainly. Gaming chipsets like Z170 and Z97 Express tend to allow overclocking and multiple graphics cards. H chipsets (H97, H110, etc.) are usually more mainstream, losing the overclocking feature for example. Q and B chipsets are aimed more at business or non-media builds.

Hopefully you now know the socket and chipset type you want your motherboard to have, so now it is time to decide on the size or form factor of the board. Motherboards are unequally divided into four main sizes (largest to smallest): E-ATX, ATX, mATX and ITX (or Mini ITX). Whilst it is possible to find boards in each size with a full complement of features, this is more about matching the motherboard to the case you are using, or vice versa. E-ATX boards will only fit in E-ATX cases; ATX will fit in ATX and often E-ATX; mATX will fit in ATX and mATX cases; and ITX normally only fits in ITX cases. ATX is the most standard of the sizes, so you will have a better choice and be more likely to get a good deal.

Most current motherboards offer a broadly similar range of sockets, ports and features. Most if not all, will include multi-channel on-board audio, multiple SDRAM sockets, PCIe sockets, basic on-board graphics, LAN port, HDMI and DVI support, and much more. However, and as with everything, the more you spend the more you can expect. Gaming motherboards may feature lighting and on-board cooling; media boards may give you 7.1 channel HD audio and extra USB 3 connections. Think about what you want to do with your PC and try to find a board that offers the level of features you want. 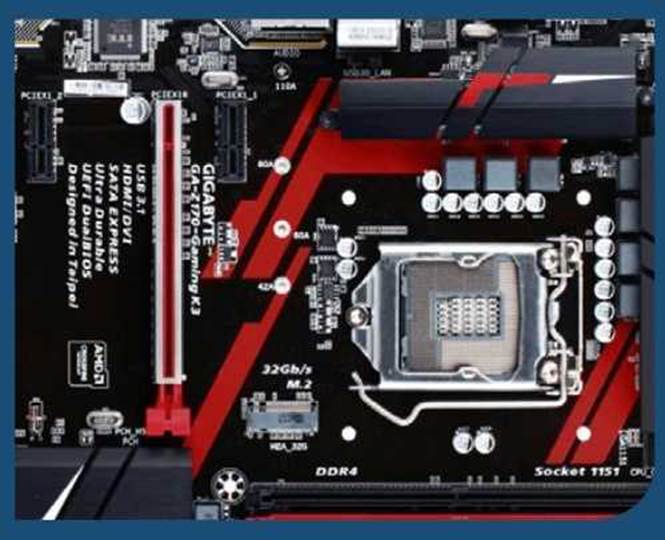 Intel and AMD processors use completely different types of socket, so an Intel CPU won’t fit into AMD motherboard.

Intel processors are built with the contact pads on the bottom of the chip and the pins that connect to those contacts are in the socket on the motherboard. 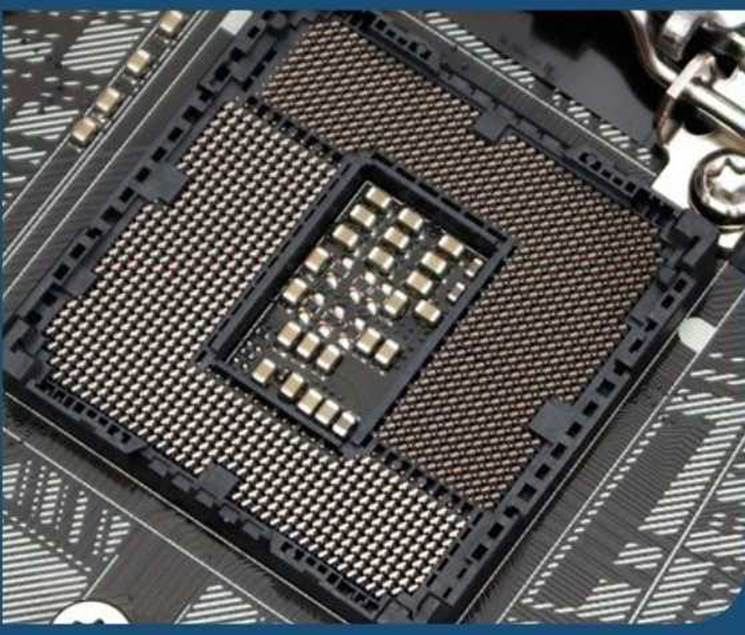 AMD processors are made the other way around, with the pins on the bottom of the processor, which fit into individual contact points in the motherboard socket. 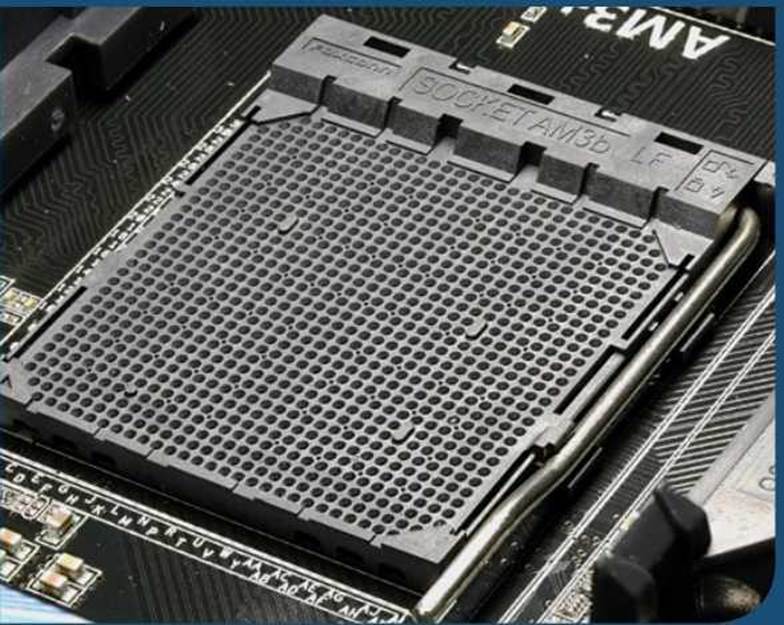 The motherboard you choose for your build needs to be up to a variety of tasks, be able to support a number of components and be suitable for your daily use. The exact specification you need may well be different to the specification another builder needs but there is certainly a base level of features you should look out for when you make your choice. 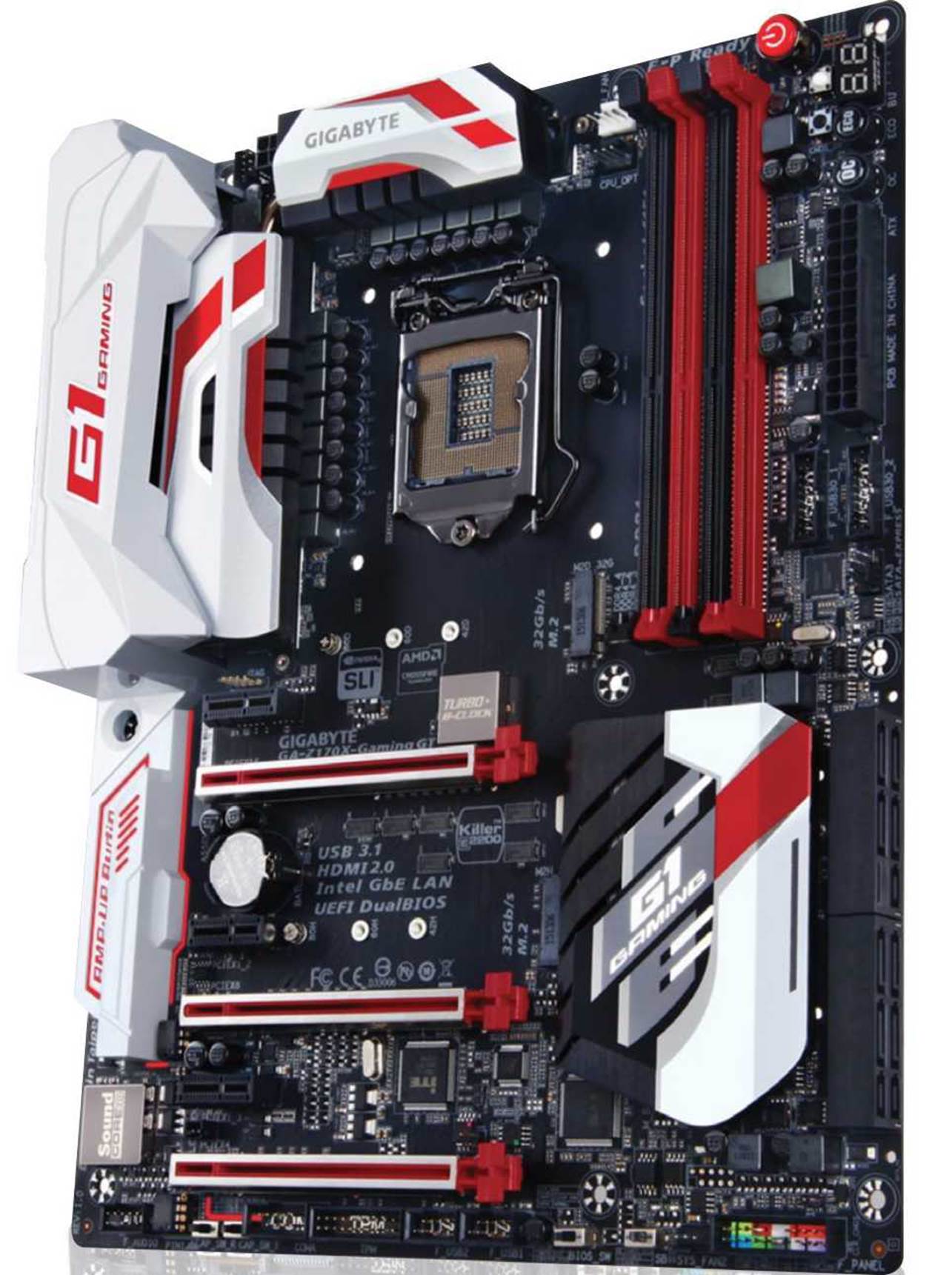 The BIOS (Basic Input/Output System) is an often overlooked but absolutely vital part of your computer system. The BIOS is particular to each type of motherboard and is provided by the motherboard manufacturer. You see it every time you switch your computer on and it’s responsible for those lines of text that flash up on the screen before Windows launches, listing things like installed RAM and other hardware details. It’s the core software of your system and boots up the computer, launches Windows and in some cases allows Windows and other apps to access things like hard drives, the keyboard, USB connections and other hardware components. The BIOS is built in to your system and is stored on a type of flash memory chip on your computer’s motherboard. For this reason it is often referred to as “firmware”, since it is in part both software and hardware. You can see which version of the firmware your particular motherboard ships with by looking for the label printed on the board itself. You can then check on the manufacturer’s website to see if you will need to update the BIOS after installation. 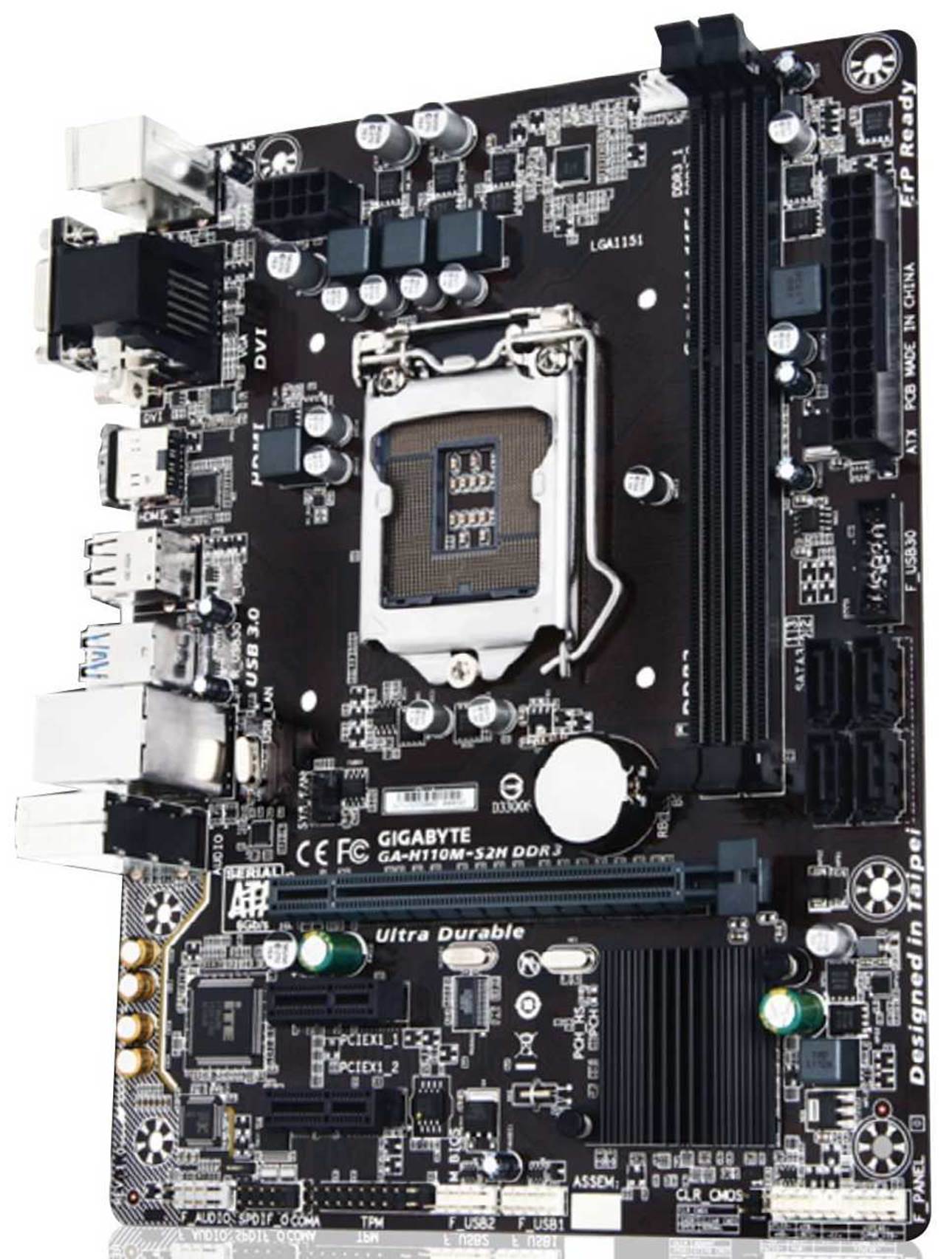 Asus’ TUF-branded motherboards used to represent the company’s  value-focused range, but with a price over £ you would have a tough time describing the TUF Gaming X670E-Plus WiFi as cheap. It also costs around £ more than the Z690-based ...
8.5
$329.99 Buy It Now
Read full review

With Intel launching its most core-laden desktop processor ever in the form of the Core i9-13900K, it's not surprising to see some suitably high-end and extreme motherboards lining up as potential suitors. Once a brand that sat at the budget end of ...
8.0
£773.12 Buy It Now
Read full review

It's surprised us that many motherboard manufacturers are opting for AMD's flagship X670E chipset at the heart of the majority of their launch products, further putting strain on people's wallets when the prices of new CPUs and DDR5 memory are ...
7.9
$517.00 Buy It Now
Read full review

If your hopes of owning a Ryzen 7000 system were dashed due to recent motherboard pricing leaks, the fact that some X670E-chipset models won't cost you more than £ probably comes as moderately good news. The ASRock X670E PG Lightning still costs ...
8.2
$289.00 Buy It Now
Read full review

If you're after a more affordable Socket AM5 option than the £ Taichi, ASRock also has the X670E Steel Legend, which will give you change from £ and isn't as eye-wateringly expensive. In fact, in terms of appearance, we even think the Steel Legend ...
8.2
$329.00 Buy It Now
Read full review

Of you fancied the look of NZXT's N7 Z690, but couldn't quite stretch to its £ asking price, NZXT has another option for you in the form of the N5 Z690. It retails for just £ which still isn't exactly cheap, but that's not a horrendous price fora ...
8.1
£230.82 Buy It Now
Read full review

Our initial review of the Asus ROG Strix Z690-I Gaming WiFi was glowing, as it sported a mighty feature set and an imposing PCB crammed with even more goodies than previous generations. However, it still won't leave you with much change from £ so ...
8.8
$199.99 Buy It Now
Read full review

As its predecessor has now been recalled, the Gigabyte Z690I Aorus Ultra Plus is now the company's flagship Z690 board for mini PCs. It gets off to a good start price-wise, costing nearly £ less than the Asus ROG Strix Z690-I Gaming WiFi and comes ...
8.9
$299.99 Buy It Now
Read full review

Overclocking Intel's 12th-gen CPUs doesn't always yield decent gains, particularly at the high end, so if you plan on running one at stock speed, you don't need to fork out for a Z690 motherboard. The Gigabyte B660I Aorus Pro DDR4 costs ...
8
$237.00 Buy It Now
Read full review

While those with deep pockets might be tempted by the Asus ROG Crosshair VIII Impact if their case could squeeze a longer mini-DTX motherboard into its innards, the Asus ROG Strix X570-I Gaming is your best bet for ...
9
$229.99 Buy It Now
Read full review

With a £ price reduction since we first reviewed it a while ago, the Asus ROG Strix B550-I Gaming is now even more attractive, especially as it's now £ cheaper than its X570 sibling too. This board give you an 8+2 power phase design and the same ...
8.9
£204.95 Buy It Now
Read full review

Z690 ATX MOTHERBOARD While it might be late to the Z690 party, NZXT's N7 Z690 was an interesting item to land in our lab. It features a PCB cover in black or white, with our white sample just begging to be placed in a clean, white ...
8.2
£289.74 Buy It Now
Read full review
Top New Review
Learn more
Partners & Advertisers
About TNR