The most advanced AVR yet from Marantz sees Richard Stevenson breaking out a 15-year-old DVD… Read our MARANTZ SR8012 Review.

Redefining the very top of Marantz’s AVR range, the SR8012 is an 11.2-channel, 140W monster. It packs in DTS:X, Atmos and Auro-3D processing, and offers Denon’s HEOS multiroom audio and (coming soon) Amazon Alexa voice control. The video side is equally buff, with support for 4K/60p, HLG and Dolby Vision HDR, and the potential for ISF calibration. 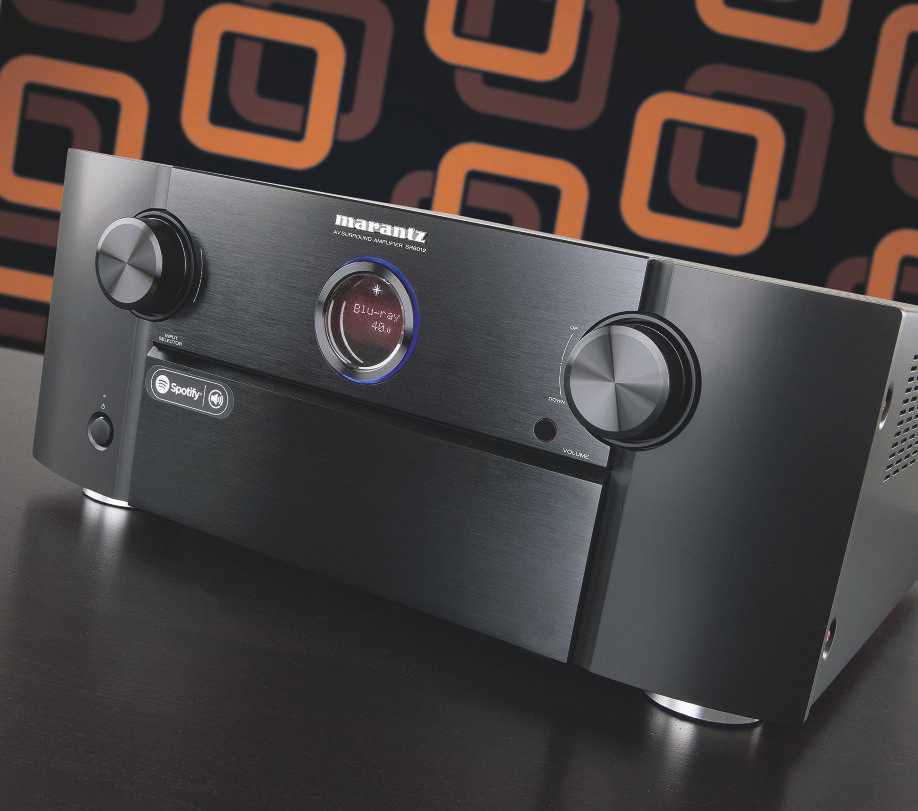 This AVR therefore has a serious specification and feature roster, up there with the best at the cutting-edge of home cinema. What happened to the reserved Marantz AVRs of old that would plough their own furrow, often a little behind the tech curve?

The answer to that question is most likely Sound United. Or rather the acquisition of Denon and Marantz by this audio umbrella group that also owns the likes of Polk Audio. Definitive Technology and Boston Acoustics. I’d wager that Sound United was determined to make its first new flagship Marantz product stand out. And it has.

Cosmetically the look remains the same. Viewed from the front the SR8012 is all but indistinguishable from my own two-year-old AV8802A processor. The central porthole display, with its fancy blue LED ring light, shows basic text over two short lines. The usual raft of buttons and inputs, and a more comprehensive display, are hidden behind the pull-down flap below. Our black sample looked suitably moody on the shelf. A gold-tinted silver version pulls off a considerably more luxurious, high-end appearance.

The rear panel is no less eye-watering. The gold-plated terminals, copper-plated chassis screws and 11-strong set of high-quality speaker terminals exude purposeful class. The remote is a little less impressive but probably only because we have seen this metal-edged design for several years. You can also operate the receiver via the sophisticated smart device Marantz app.

The HDMI roster is 8-in/3-out. all 4K/HDCP 22 compliant, and the ‘Monitor1’ output is Audio Return Channel (ARC) enabled. An imminent firmware update

is due to make this eARC compatible, allowing next-gen sound formats to be fed via a connected TV.

Marantz’s video board passes through HDR10. HLG and Dolby Vision HDR formats, and REC.2020 content to 4:4:4 colour resolution. There is no confirmation on HDR10+ right now. or other possible HDR formats to come. Needless to say. there is upscaling of video inputs to 4K.

The HDMI stage is joined by a suite of analogue and digital audio inputs, plus video fallbacks. This includes 7.1-channel phono input, pre-outs for all 11.2-processed channels and two further stereo zones. For those who are back into a vinyl music groove, there’s an MM phono stage.

Network connectivity is Wi-Fi. Bluetooth and wired Ethernet, opening up a raft of streaming possibilities. As mentioned, the AVR is HEOS multiroom enabled, allowing your home cinema to become a premium zone for your streamed music system. It also supports AirPlay. Spotify,  Deezer and Tidal, and integrates Tuneln ‘net radio.

This AVR uses Hyper Dynamic Amplifier Modules (HDAMs) from the brand’s Reference Series stereo products and boasts a fully copper-plated chassis. In the middle of the amp section is a toroidal transformer that looks like it could power a small village. The 32-bit DACs can handle hi-res audio to 24-bit/192kHz and there’s decoding for formats from MP3 to DSD 5.6MHz.

As we found with the also 11-channel Denon AVR- X6400H, you do really need to make a choice between placing your speakers in a Dolby/ DTS layout or an Auro-3D-flavoured one from the get-go if you want to make use of this receiver’s substantial object-based audio talents. Swapping between formats on anyone of these speaker layouts just isn’t optimal. Given the proliferation of DTS:X and Dolby Atmos material, you know what you need to do…

The SR8012 has Audyssey MultEQ XT32 on board, and is also capable of being configured with the Audyssey Editor app. It is for itinerant tweakers and not essential for getting a good setup.

A UI wizard guides you through everything from hooking up speaker wires to the 8-point Audyssey measurement. It’s slick and shared across the rest of Denon and Marantz’s top-end AVRs. This version was clearly based on a 9-channel Marantz AVR, though, and the odd bug is still awaiting a firmware splatting. I found an Auro-3D menu that suggested you will need an external power amp to drive a 10th Auro channel. Whoops.

Once you’ve been through the Audyssey routine it is well worth diving into the menus to see what has been enabled by default. For my setup, Dynamic EQ, Dynamic Volume and LFC containment are not required, and I was surprised to find loudness management set to on as standard, as that automatically enables dynamic compression and dialogue normalisation.

Even without the Audyssey Editor app you get the opportunity to fettle channel EQ with a 9-band graphic equaliser. Well, sort of. The channel options for the equaliser are limited to left, right, left+right or all channels. If you want to tame the high-frequency impact of just your dialogue speaker for example, you are out of luck. Well, out of pocket by twenty quid for the Audyssey Editor App anyway.

As Marantz’s first 11-channel AVR. and packed to bursting with tech and features, does the SR8012’s sound match this maelstrom of AVR posturing? Thankfully, no. What we have here is a receiver built around Marantz’s much-loved smooth, detailed and sophisticated sound.

Paddington 2 on Blu-ray might not be one of my regular movie test discs, but as the first instalment was so good and the sequel has a Dolby Atmos track. I had to give it a go. Neither the Marantz nor the film disappoint even if Atmos overhead effects are few and far between. The chirpy soundtrack is infectious, the dialogue characterful and the slap-stick delivered with great comedy timing. Paddington’s short tenure in a barbershop is a festival of sound effects sent to every corner of the room and through this AVR each effect has real pop and sparkle.

Perhaps more impressive is the detail in the dialogue. Ben Whishaw (the voice of Paddington). Julie Walters. Ben Miller and Hugh Bonneville all have distinctive voices that the SR8012 crafts accurately and projects with vigour. There’s a good balance of depth and clarity through the centre channel and characters never feel trapped inside the speaker. Along with subtler ambient information from the surround and Atmos channels, the SR8012 goes a long way towards creating a wide, three-dimensional soundstage with believable presence.

Thumps, crashes and thuds have plenty of punch but not quite the seismic scale of the burliest receivers. With Audyssey XT32 EQ set to ‘Reference’ I found the overall balance aired on the lighter side of my more robust LF preferences. Adding a couple of dB to the subwoofer trims instantly added richness to the lower registers and gave the sound more body. I did try the graphic equaliser set to ‘all channels’ and rolled in a lower-mid bass boost.

After some fettling I had managed to make an entire dog’s dinner of the sound. Leave that off then.

With content that naturally has more guts, the Marantz quickly gets into an all-action stride. The vanilla Dolby Digital 5.1 mix on the DVD pressing of Lord of the Rings: The Return of the King impressed on every level. Okay, maybe not a height level, but the SR8012 did an outstanding job of conveying the epic ambience of the soundtrack and delivering sword clashes and big explosions with a real dynamic edge. There was no bass overhang on effects like huge doors slamming, or bass bloom on deeper voices. You simply get finely presented and neatly executed effects. The Marantz certainly doesn’t set out to turn your stomach inside out with visceral bass impact but the LFE and Sub gain controls are there if you want it to.

Those who double up their system for audiophile music listening certainly won’t be disappointed with the SR8012. That polished, detailed sound shines through in two- channel. particularly using the Pure Direct mode. Sticking with retro media, the Marantz lets the supremely well- recorded CD of Kate Bush’s Hounds of Love breathe effortlessly into the room, its stereo mix given a huge soundstage. Via the receiver’s built-in phono stage, a romp through the remastered Led Zeppelin boxset Mothership delivered an evening of air guitars and wailing as the SR8012 brought the near 50-year-old rock ‘n’ roll to life.

Denon’s latest AVRs have been getting a whole lot less aggressive sounding than their fast and loose forebears, while Marantz is now adding all the top tech and toys to its sophisticated audio charms. Lines between these two sibling brands seem to be blurring.

I’ve enjoyed the SR8012 a lot. It’s a cracking all-round AVR. mixing a superb lineup of features with a polished, articulate and believable sound, and I found it has (most of) the extra oomph over the previously reviewed nine- channel SR7012 that I was hankering for. It still won’t make a sit-com Toyota Aygo journey sound like a scene from Bullitt, but does engage the listener at every turn, its full 11-channel amplification building on Marantz’s signature audiophile quality sound. That it has feature updates coming later this year only adds to its appeal

A rung below the brand’s 800 Series, this loudspeaker range packs floorstanding, standmount and centre channel models with a premium ethos. Assemble a 7.1 flatbed for the SR8012. and add heights from B&W’s CCM range.

A sophisticated sounding, supremely well-equipped 11-channel AV receiver that will wow all but the hardest of hardcore action fans.