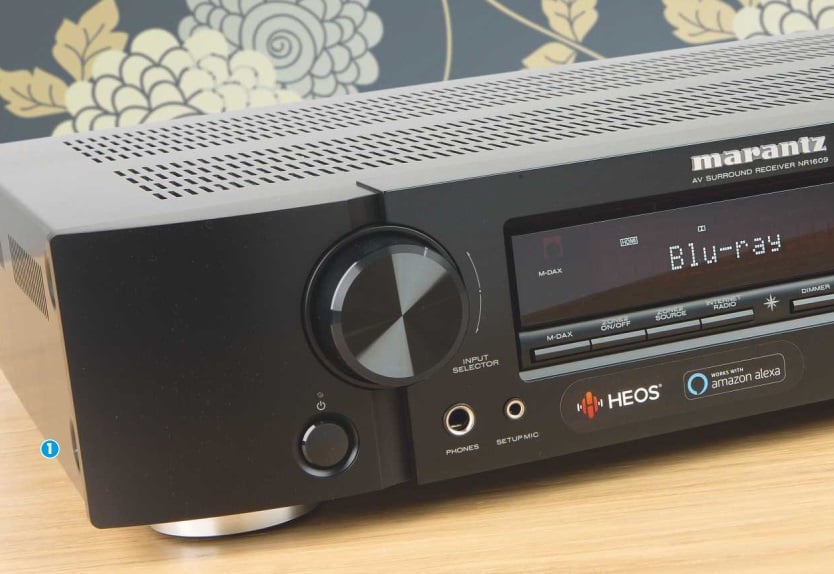 Just when you think Marantz’s venerable slimline NR receiver range (first introduced, rather sheepishly, back in 2011) is ready for retirement, it bounces back, magically reinvigorated and ready to dance some more. It’s the Dick Van Dyke of home cinema hardware.

You could be forgiven for thinking there are no more incremental additions left to make. Last season’s NR1608 was a well-specified little belter. But Marantz’s engineers have been working away, and have conjured up even more functionality.

Cosmetically, there’s little new with this season’s upgrade. The model adopts the familiar half-height design and characteristic curved fascia seen on previous generations. Nothing wrong with that, of course – the design is a classic, and makes the AVR a lot easier to camouflage in a living room than a full-size model.

Bluetooth and Wi-Fi streaming (plus Ethernet) are offered, as expected. Two Wi-Fi/Bluetooth aerials attach left and right on the receiver’s rear. 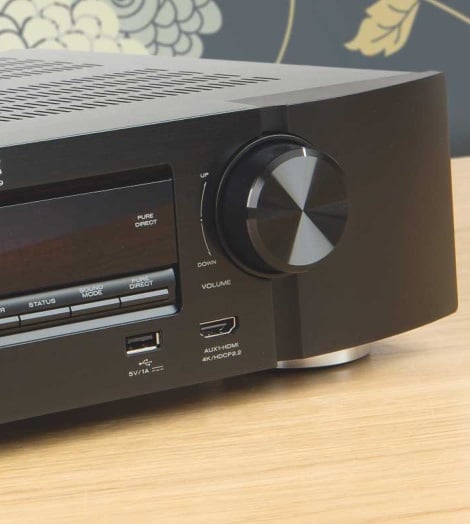 But always on trend, the NR1609 also now works with Amazon Alexa. You can use voice control to turn the AVR on or off, switch inputs and alter volume. It’s also AirPlay 2 compatible. The latter is great news if you inhabit the Apple ecosystem (I’m feigning excitement here, because I’m a Windows/Android enthusiast all the way), letting you play Apple Music, Netflix and YouTube from any iPhone, iPad, Mac or Apple TV device, with (hey) Siri offering basic user control (pause, resume, skip) for music services.

As AirPlay 2 also supports multiroom playback, the NR1609 can function as part of a larger whole-home AirPlay 2 system. But there’s also HEOS multiroom functionality onboard, so if you’ve invested in HEOS active speakers, the AVR can play to or act as a destination for any audio you want to stream around your network.

HEOS also brings with it integrated audio services like Tidal, Spotify Connect and Deezer, via the HEOS app.

Magnificent Seven. Plus one

There’s less back panel space here, but Marantz still manages to accommodate seven HDMI inputs (plus another on the front fascia), all compatible with full bandwidth 4K sources. A fresh party trick is the ability to identify each HDR type (HDR10, Dolby Vision, HLG) as part of its video info display. The receiver will also reveal pixel depth and colour space for content sources.

There’s only a single HDMI output, however (a feature on some more affordable receivers), which rules this model out if you want to (easily) run both a flatscreen TV and a PJ.

For private listening, take advantage of the full-size headphone jack.

Dolby Atmos and DTS:X compatible, the NR1609 is a seven-channel design, which means it supports either a 5.1.2 Dolby Atmos or 7.1 Dolby Surround configuration, depending on your speaker choice and room layout.

I ran the model with a 5.1.2 array, using Dolby upfirers as part of the front soundstage.

The result was a veritable wall of lively sound.

This model also introduces DTS: Virtual X, a post-processing mode that could be useful

if you have a flatbed speaker array (maybe you’ve yet to buy Atmos modules, or don’t want extra boxes in your media room), and want to synthesis height channel audio.

During the setup procedure the receiver is optimized using Audyssey MultEQ room calibration, via a supplied mic. Audyssey does a respectable job, provided you take advantage of its multiple location measurement options (for this review I used 5 of the 6 slots available, all that was required for my chosen listening room); this certainly shouldn’t be skipped during the install procedure.

When it comes to internal hardware, there are no significant changes, and as a result the NR1609’s audio performance mimics what we experienced with its predecessor. That’s to say, it’s fast and dynamic, with a particularly refined mid-range. The latter really helps delineate onscreen dialogue. If you’ve ever bemoaned TV dramas for poor enunciation, you’ll be surprised at how clear those mumbling culprits can sound.

The receiver (which has dual subwoofer pre-outs) has no problem executing room-wobbling LFE either, adding enormous weight and impact to its theatrical performance.

While the NR line has never had a surfeit of power, it again proves more than capable of filling the average living room. Marantz quotes a power output of 90W per channel into 6 ohms with a 1kHz signal; a 50W per channel, 8 ohm, 20Hz-20kHz figure is more real-world. With real movies, as long as you don’t overdrive it, it sounds consistently smooth.

The aural soundscapes of Ron Fricke’s mesmeric travelogue Samsara (Blu-ray) ebb and flow like sand in the wind. A more convincing example of sonic immersion you’ll be hard pressed to find. Far less tranquil is watery whaling drama In the Heart of the Sea. The sledgehammer waves of a storm buffet with almost physical force; the NR1609’s soundstage providing a convincing sonic shower.

Thanks to its rapid transient response, action scenes hit with dramatic force, while panning is taut and smooth. Large theatres may be off limits, but for media playrooms and open-plan living environments this is just the ticket.

Precision has long been a watchword for Marantz home theatre, a heritage honoured here. When Diana Prince walks into the Louvre, at the opening of Wonder Woman (Ultra HD Blu-ray), her heels are sharply cut from the swelling, ominous Zimmer score. A gift from Bruce Wayne, and then we’re on Themyscira, running with the young Amazonian. The NR1609 emphasises the glory and grandeur of the location, even though the Dolby Atmos channel is barely used beyond some birdsong and Foley ambience. Yet the sonic whole is cohesive, and fittingly epic.

When it comes to stereo, this receiver can hold its own amongst lower mid-range rivals. It’s a suitable partner for mid-range speakers, be they standmounts or slim ftoorstanders, although I suspect it will find itself allied to sub/sat systems. Either way, it will acquit itself well.

This is an enviably specified AVR (AirPlay 2, Alexa support and the inclusion of a phono stage for vinyl replay are new additions) that scores high when it comes to usability and audio quality. Everything you need from a multimedia hub is here, be it gaming, music or movie related. Yes, there are AVRs that offer comparable precision and delicacy, but none at this price share the design appeal or functionality

This 5.1 bundle features two-way satellites and a relatively compact but punchy sub, and provides cohesive surround sound with great dynamics considering the form factor. Add an extra satellite pair for 7.1