The company has always been a strong force, but in recent years it has made the affordable market its own by producing a long-running series of class-leading machines.

The CD6006 UK Edition shows no signs of easing that vice-like grip. 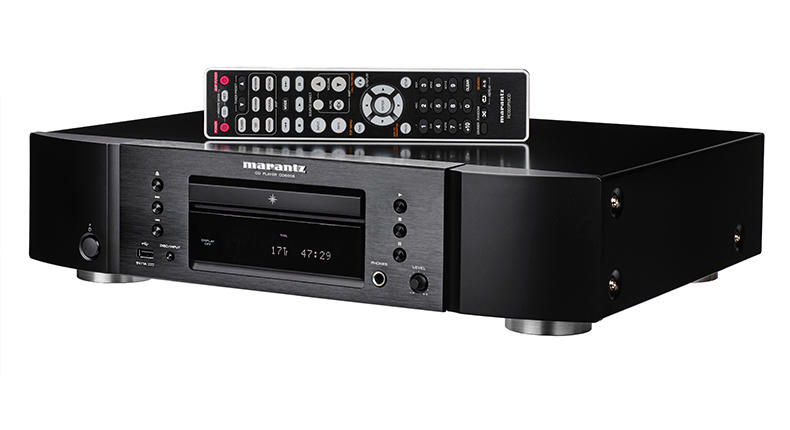 The UK Edition is a specially tweaked version of the CD6006; one that replaces the original in the UK and that will be sold as a premium alternative in other markets alongside the basic 6006. Marantz has a similar upgrade for the partnering PM6006 amplifier in the pipeline.

Those familiar with the standard (and. let’s not forget. Award-winning) CD6006 may well look at this player and wonder if anything has changed. Take the UK Edition badge off the new one and they’re identical from the outside.

That’s no bad thing – we’ve long praised the player’s solid build and smart finish. The controls work with precision and the transport is commendably quiet. There are machines that cost hundreds more that don’t feel this good to use.

The features set is much as we’d expect from a player at this level. There are optical and coax digital outputs alongside the standard RCA single-ended analogue feed. Look around the front and you’ll find a clear display and a simple button layout. There’s also a USB input, which allows the connection of Apple products and USB memory devices. It’s compatible with MP3. WMA, WAV and AAC files.

Marantz isn’t particularly forthcoming regarding the internal differences between the standard and UK Edition, but we know they centre on improvements to the power supply of the digital-to-analogue circuitry and upgrades to the analogue output stage. The company has built a great reputation on the ability to tweak its products by improving component quality and this player shows that with specially selected ELNA capacitors used in sound-critical places – the intent being to improve dynamics and sound staging in particular.

While none of this appears ground-breaking. some of the team behind the product have been involved with CD since the beginning. They have a breadth of knowledge and experience of the subject that’s hard for the competition to match, let alone better.

Once we start listening, it doesn’t take long to discover that they’ve done a terrific job. The new player delivers a crisper, clearer and more robust sound than the highly rated original. As with the standard version, it’s worth turning off the digital output and display for serious listening. The player just sounds cleaner and more precise this way.

We load Bruce Springsteen’s Magic into the UK Edition’s slick drawer and sit back to enjoy a full-blooded rendition of Radio Nowhere. The Marantz punches harder than ever with this track, delivering the song’s momentum with considerable skill. The wailing guitars come through with power while the Boss’s vocals are rendered with all his renowned energy and passion intact.

There’s plenty of detail, and the ability to organise it into a musical and cohesive whole. Before we know it. we’ve got to the final track. Terry’s Song, a heartfelt tribute to Springsteen’s deceased friend. The production is demo-like in its rawness and can easily sound coarse and edgy. Here the CD6006 UK Edition proves that none of the base model’s much-admired refinement has been lost, but there are notable gains in the ability to dig deeply into the fabric of the recording. The standard player, good though it is. sounds a touch blurry and dynamically restrained in comparison.

The Planets by Holst is a tough test, but one that doesn’t faze this player. It takes the wild dynamics of Mars in its stride, delivering a full dose of power, scale and

Recently revamped, this talented amp sounds better than ever. Great detail, dynamics and agilty are among its main strengths

The Revel name might not be widely known, but the confident bass, smooth integration and fine build of these M16s makes them shine

As well as being an elegant match for the Ml 6s, the Concept 20’s fine build quality will help the CD6006 sound its very best

On the outside, it looks just like the base CD6006, but under its skin this UK Edition hides  some key revisions

If you’re using the CD6006 with other Marantz kit (such as the PM6006), these connections for a remote will allow you to use a single handset for both devices.

Solid build and a smart finish are the norm for Marantz products, and this version of the CD6006 continues the trend. The controls feel good to use, too

drive in the process. The stereo imaging is stable and precise while the player’s tonality doesn’t stray far from the slightly rounded balance Marantz’s products have long had. This new one has a touch more brilliance at the top end, which is enough to add more bite, but not so much that poor or aggressive recordings become wearing.

Marantz cd6006 uk edition review: Across the board

We run through a whole range of music from the pure, heartfelt soul of Nina Simone right though to Bon Iver’s dizzying 22. A Million set. and the CD6006 UK Edition doesn’t come up short. It’s more exciting and informative than the standard version, but never strays too far from the template that has made Marantz’s affordable players so good. Despite all the insight, this remains a forgiving listen, one that won’t make a meal of a poor recording. As a bonus, this unfussy nature makes it easy to partner too.

We try the built-in headphone output and it retains the same admirable sonic traits as the line-level feed. Marantz has given a good deal of thought to this output, offering not only a dedicated volume control but different gain settings (available through the set-up menu) to improve headphone matching.

What would you match this CD player with? The obvious amplification partner is the PM6006 amplifier, of course, but we get excellent results with Rega’s Brio and Elex-R. There’s plenty of sonic stretch in this design, and it doesn’t sound out of place, even in far pricier systems.

To sum up. we think this is a great player for the money. In our experience you would need to move up to the likes of Cyrus’s CDi or Naim’s CD5si to get a proper jump in sonic performance. And that’s saying something. A bargain? Without a doubt.

Even by Marantz's standards, this is a winner. The finest player anywhere near the mark? We think so