Lubuntu 19.10 is the third release of this distro with the new LXQt desktop replacing LXDE. It is the 20th release since Lubuntu First appeared in April 2010, as version 10.04. Read our Lubuntu 19.10 review.

I had intended to just upgrade my 2011 vintage System76 Pagolin Performance laptop From 19.04 to 19.10, but both the Muon package manager and the command-line release upgrader, 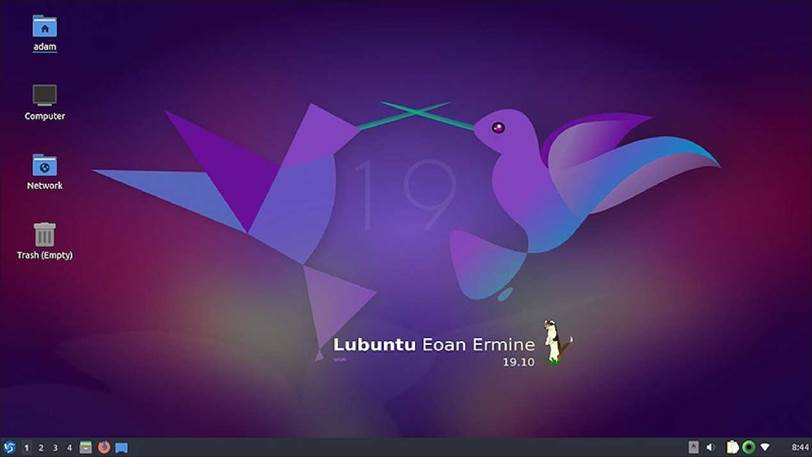 were insisting no new release was available, even several days after it was out on 17 October, 2019.1 must have had a setting wrong somewhere, but my Software Sources all looked correct. Nevertheless, I carried out

My desktop PC was still running Lubuntu 18.04 LTS and I decided to do a Fresh installation oF 19.10 on it too, as the instability of the PCManFM 1.2.5 File manager was making it annoying to use, with its Frequent crashes.

Both of the two Fresh installations went very quickly, using the new Calamares installer, with the laptop done in 11 minutes and the desktop completed in nine minutes, Far Faster than any previous Lubuntu installation. Configuring and getting everything set up was Fast too, done in an hour and a half and 47 minutes respectively.

Boot times on the LXQt version of Lubuntu have proven slower than the old LXDE versions and 19.10’s boot times are even slower than 19.04, clocking 1:44 on my laptop and 1:23 on my desktop. LXDE boot times were almost always under a minute. Hopefully this will be improved in the upcoming 20.04 LTS.

There is the striking new two- hummingbirds wallpaper, designed by Marcelo D. Moreira of Argentina and, in Fact, the system File /usr/share/lubuntu/wallpapers has a nice selection of new wallpaper to choose From, From the artwork competition that the Lubuntu developers held For 19.10, plus some older wallpaper From recent releases.

Other changes and improvements include ScreenGrab which replaces the integrated screenshot tool built into the image viewer, LXImage-Qt.

FeatherPad now includes spellchecking, a very welcome addition to the very capable default Lubuntu text editor. Users will need to install Hunspell to get it working, though. Once installed, spellchecking can be called From

the “Edit” menu, or with the unorthodox F2 key (most Linux applications, like LibreOffice, gedit and jEdit, use F7 For spellchecking). FeatherPad does allow changing the shortcut keybindings, but doesn’t allow changing F2 to F7 as it is used For “regular expressions”. By default, spellchecking starts From the cursor position. It is worth noting that users can’t just highlight text and spellcheck it.

The shortcut For the bulk File renamer in PCManFM-Qt now works. To use it, just highlight more than one File and hit Ctrl+F2 to rename multiple Files at once.

The new version oF LibreOFFice included in 19.10 saves documents notably Faster than previous versions. I Found that LibreOFFice does not include a dictionary For spellchecking and one had to be added as an extension From English Dictionaries to get it working.

All applications now open Faster than in 19.04, making it Feel much more snappy, once the slow boot­

* Indicates the same version as used in Lubuntu 19.04

As can be seen by the large number of asterisks, many application versions have not been changed this time around, which at least guarantees stability.

As in all the LXQt versions of Lubuntu, this one does not come with a webcam application, although Cheese or Guvcview can be installed From the repositories, if needed. At least there is little worry about webcam hijacking – as there’s no software installed to run a camera.

Oddly 19.10 comes with K3B, a CD/DVD burning application, which is a bit anachronistic in 2019, given that new laptops and even desktop computers haven’t come with optical drives For quite a number of years.

Lubuntu in its LXQt versions is a breeze to customize and set up For use. Everything is in the menu under PreFerences, with most key items under LXQt Settings. Like the last two releases, 19.10 comes with a default dark theme, Lubuntu Arc, but it is quick and easy to change it iF it doesn’t suit. Personally, I prefer lighter themes.

By default’, the panel (task bar) is at the bottom of the screen, but it can be moved to any edge in the Configure Panel.

The scree- saver and locker is XscreenSaver, a very proven application that is still being actively developed. It works very well and is much more reliable than the previous buggy LightLocker. XscreenSaver even offers an assortment of actual screensavers From the 1990s that look oddly out-of-date on a modern desktop. It can also be set to a simple black screen instead, if the screensavers prove just too “groovy” For the 21st century. It works well as a screen locker, though.

In daily use, Lubuntu 19.10 has proven almost completely trouble­Free. The sole exception being the edge scrolling mode in the laptop touchpad set-up, which doesn’t seem to work right, at least on my hardware. Two-Finger scrolling mode works Fine, though.

Lubuntu 19.10 builds well upon the success of 19.04. The developers seem to be Fixing things at a good clip and polishing it up For the next key release, the First LXQt LTS version, due out on 23 April, 2020.

The 19.10 release is bug-Free enough to have been an LTS release itself and this bodes really well For the expected quality of the upcoming LTS.

Adam Hunt started using Ubuntu in 2007 and has used Lubuntu since 2010. He lives in Ottawa, Ontario, Canada in a house with no Windows.