The real “acid test” is here! It has been six years since the LXQt desktop project was started and we now have the first Lubuntu LXQt long-term-support release. Read our Lubuntu 20.04 Review.

Lubuntu 20.04 LTS is the fourth release with the new LXQt desktop and the 21st release since Lubuntu first appeared in April 2010, as version 10.04. This LTS version follows three “standard” Lubuntu releases, each used as development and testing platforms, progressively working towards this LTS version.

I did a fresh installation of Lubuntu 20.04 LTS, from a USB stick on both my desktop and laptop PCs. 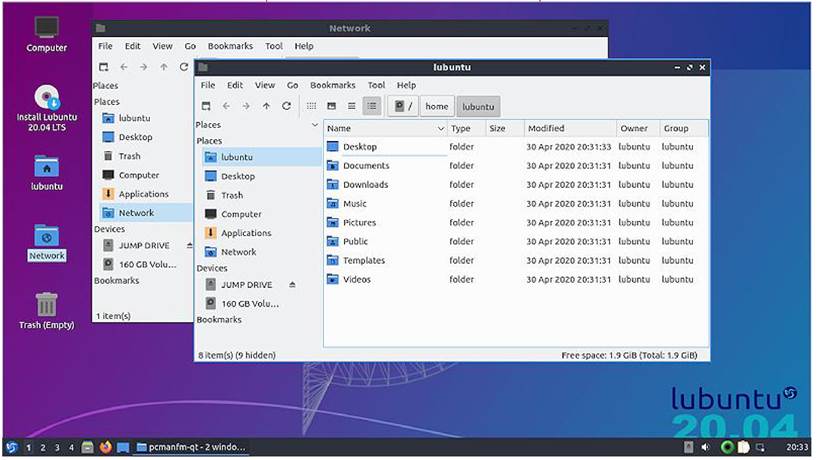 The installations went very quickly, using the Calamares installer, with the laptop done in 14 minutes and the desktop in an amazing five minutes. Lubuntu is ready to get to work right out of the box, or you can add applications and employ all the customization tools to make it look almost any way you like.

Boot times on the LXQt versions of Lubuntu have been slower than on the old LXDE versions, which were almost always under one minute. Since LXQt was introduced, boot times have been getting progressively slower, too. 20.04 LTS has boot times of 1:33 on my desktop and 1:45 on my laptop.

As would be expected, there isn’t a lot new in this LTS release. LTS releases typically focus on stability and performance, rather than new and untested features. This release uses LXQt 0.14.1, based on the Qt 5.12.8 toolkit.

The system boots to a new LXQt-themed wire-frame hummingbird wallpaper designed by Hudson Bomfim for the Lubuntu wallpaper contest for this release. The system file /usr/share/lubuntu/ wallpapers has a nice selection of other new wallpaper to choose from, from the artwork competition. Of course you can always substitute your own favorite wallpaper.

The FeatherPad text editor now includes ampersand highlighting, and a “save all open files” feature. Unfortunately, this release did not include the current FeatherPad release, 0.13.1, which came out on 12 March, 2020, and offers an older release, 0.12.1, which dates from 12 January, 2020, instead. To add 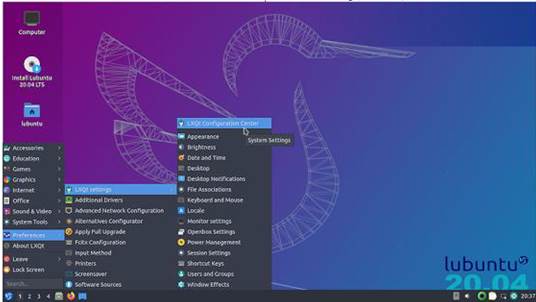 spell checking, FeatherPad requires the Hunspell dictionary to be downloaded.

A new software update notification application, called Update Notifier (package name lubuntu-update-notifier), is also included. This was developed by Lubuntu member Hans Moller. It checks for updates and presents a dialogue box when there are any to install. Updates can be installed directly from the Update Notifier, or users can open Muon and do it that way, which gives the ability to examine the updates in detail. Adding the new Update Notifier is a good move, as it makes Lubuntu more user-friendly, especially for users who might not remember to manually open and check Muon on a regular basis for updates. The Update Notifier pops up automatically, but can also be found on the “Preferences” menu as “Apply Full Upgrade”.

I found that, once again, LibreOffice does not include a dictionary for spellchecking, and one had to be added as an extension from https:// extensions.libreoffice.org/ extensions/english-dictionaries to get it working.

All applications now open faster than in 19.04, making it feel much more snappy, once the slow boot­up is done.

Some of the applications included with Lubuntu 19.10 are:

* Indicates the same version as used in Lubuntu 19.10.

The large number of asterisks show that many application versions have not been changed, which contributes to potential stability, if not excitement.

A bit of an anachronism is the inclusion of K3B for CD and DVD burning. It seems odd to have it included by default, since laptops and even desktop computers haven’t come with optical drives for many years now. I tend to remove programs that I know I will not need, to reduce the requirement for updates and to declutter menus, as well as save hard drive space, so if your computer lacks an optical drive, K3B may be a candidate for your list for: 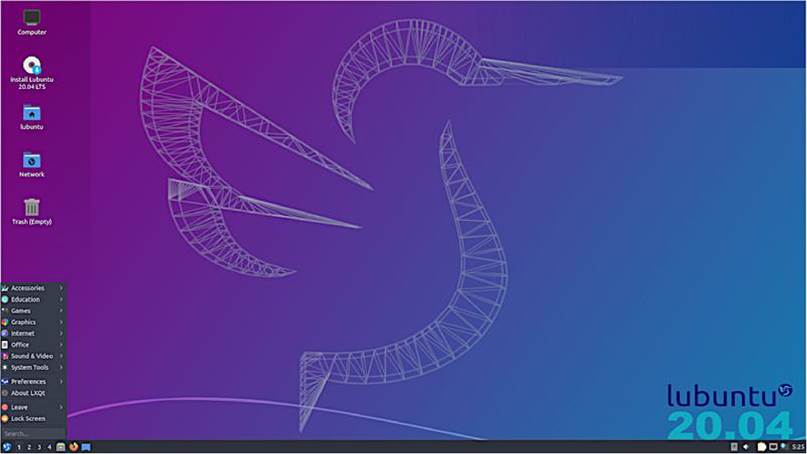 The screen saver and screen locker provided is XscreenSaver, a veteran application that works very well. In use, it has proven to be much more reliable than the previously employed LightLocker. XscreenSaver has an assortment of actual old time screensavers from the 1990s that look oddly out-of­date on a modern desktop. These are “on” by default, but easily can be turned off to display a black screen instead.

As in all the LXQt versions of Lubuntu, 20.04 LTS does not come with a webcam application. There are applications for this, like Cheese or Guvcview, that can be installed from the repositories, if needed. Given worries about webcam hijacking, not having the software to run a camera by default is probably a good choice.

The LXQt versions of Lubuntu also do not come with photo editing or video editing software, although there are many choices for these in the repositories.

Lubuntu, in its LXQt versions, has always been a real breeze to customize. Everything is in the menu under “Preferences”, with most key items under the “LXQt Settings”.

Like all the LXQt releases so far, 20.04 LTS comes with the dark Lubuntu Arc theme as default, but it is quick and easy to change it in “LXQt settings”, “Openbox Settings” on the “Preferences” menu.

In daily service, Lubuntu 20.04 LTS has proven completely trouble­free. The workflows are easy and the software all just lets you get work done. It actually is that “flawless” LTS release that Lubuntu fans have been hoping for.

Lubuntu 20.04 LTS completes the two-year development cycle, consisting of three standard releases leading to this LTS release. Overall this represents the culmination of a development project that commenced in 2014 to create a new Qt-based desktop for Lubuntu: LXQt. The process has taken much longer than was forecast six years ago, but was worth the wait. This first LTS release is stable, smooth, elegant, and a real joy to use. This is the best Lubuntu release so far. 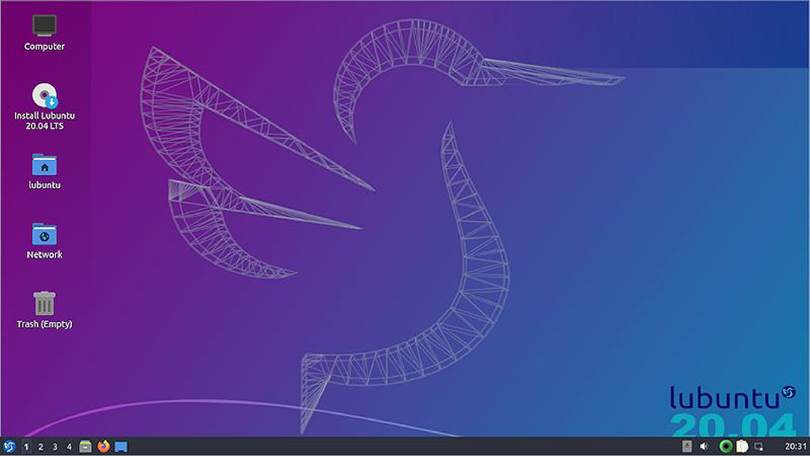