Logitech attempts to reinvent the wheel once more

After a five year absence from the racing wheel peripheral market, Logitech have finally developed two successors to the immensely popular G27 racing wheel.One of these is the Logitech G920 Driving Force, designed for PC and Xbox One. In combination with the Logitech G29, which is aimed at PlayStation 4 owners, these represent Logitech’s new range of racing wheels, designed to mix it up with the likes of Thrustmaster and Fanatec for those seeking the best way to play racing games. 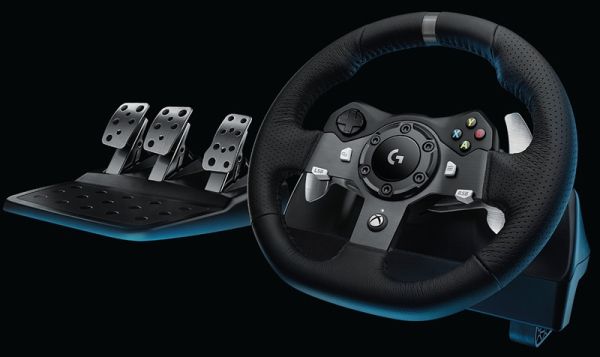 Visually, the G920 doesn’t represent a major departure from the design of the G27. As the wheel is aimed for use on the Xbox One, the button design is taken directly from an Xbox controller, with all the face buttons and shoulder triggers making an appearance on the face of the wheel. Nearly everything else is similar to the G27, including the wonderful hand-stitched leather finish and the solid stainless steel paddle shifters and pedals.

The only major difference hardware wise is the H-shifter that was included with the G27 is now a separate purchase, which hurts the value for those looking for the most realistic experience when driving manual cars. That being said, for those looking to upgrade from the G27 to the G920, the G27 shifter is compatible with the new wheel, making a purchase of the new shifter unnecessary.

Instead of opting for a belt drive system used in many other wheels, Logitech have stuck with the helicalcut gear driven system from the G27. This gives the wheel a similar feeling to the G27 when turning, which may feel slightly bumpy compared to the smooth operation of belt-driven wheels. However, this small detail is not likely to effect your enjoyment of the wheel itself, nor will belt-driven wheels magically reduce your lap times in racing games.

However, don’t mistake this wheel as being a re-badged G27 for the new generation of consoles. Internally, the wheel has undergone changes based on feedback from G27 users, and they show.

New to the G920 are hall-effect sensors. Compared to the optical sensors of Logitech’s previous wheels, these new magnetic sensors are designed for higher precision, with little to no wear that affects Logitech wheels after years of use.

Logitech have persisted with the dual-motor force feedback system from the G27, however this time around the noisy clanking when the wheel vibrates has been significantly reduced, both in terms of occurrence and volume. It hasn’t been totally eliminated, meaning it is still a louder experience than the similarly priced Thrustmaster T300, but for those used to the house-shaking G27 rattling, the G920 will immediately sound quieter. This is impressive considering the actual strength of the force feedback has been given a small increase this time around too.

In addition, Logitech have addressed one of the key complaints of G27 owners, the force feedback deadzone. This is most noticeable when slight FFB effects can not be felt through the wheel, especially in the centre of the axis where nuanced FFB effects are common. The G27 had this issue apply to upwards of first 20% of the force feedback capacity, making the wheel feel lifeless when driving on straights and fast corners.

The G920 has not removed this deadzone, but it has significantly tightened it, aligning it very closely with deadzones on similarly priced wheels on the market. The deadzone is now barely noticeable, with games previously struggling with the issue now feeling much more livelier.

The pedals have also undergone significant improvements. While the accelerator and the clutch pedals have remained the same from the G27, the brake pedal has been redesigned. The G920 now features a heavy, non-linear brake pedal, which now responds to the pressure applied instead of calculating the braking force by the distance the pedal has been pushed.

This creates a similar feeling to the brakes on actual racing cars and encourages better braking techniques, as it’s harder to lock up but more natural to find consistency under braking. This new brake isn’t as accurate as those using load cell sensors featured in some high-end wheel sets, but it is still a major improvement on the G27 pedals and makes the pedals included with the T300 feel amateurish by comparison.

For all that is done right on the hardware side, the software is disappointing. While support on Xbox One is spot on for all games that support force feedback wheels, support for the G920 on PC is a mess at the time of writing. This is mostly due to issues with the Logitech Gaming Software program providing drivers that are simply not compatible with many games.

No game has properly working force feedback, instead providing a universal wheel weight that doesn’t correspond to the action on screen. Only Euro Truck Simulator 2 and F1 2015 are exceptions to this. The software itself is bare-bones compared with the software used with the G27 as well, with no ability to fine tune the wheel outside of changing the rotation limit of the wheel and the sensitivity of the pedals. However, given that the G920 doesn’t release until October, I am confident this can be rectified before then.

For those looking for their first wheel, the G920 is a great choice, as it provides the best overall package for a wheel underneath $500. The G27 may be significantly cheaper these days, but the improvements to the wheel and pedals make the newer range worth the added premium, even when there is no H-shifter included. The rival T300 and TX wheels from Thrustmaster are belt driven, quieter, and retail for around the same price as the G920, but both are let down by very poor pedals and neither include a stick shifter as well.

For those who already own a G27 for PC, the decision is much tougher. The improvements from the G27 are noticeable, but the price point hurts the case for upgrading, especially when you could upgrade to the fantastic Thrustmaster T500 for a few hundred dollars more.

A great wheel and pedal set that is slightly let down by a steep price and software issues. Highly recommended for those looking to buy their first wheel.