Plenty of modelling power in a small package, but not the best choice if you’re after all-round ability

Lenovo inherited IBM’s workstation with its ThinkPads, so the division along ThinkStation P310 Tower sits in a rather illustrious line of computing.

The P310 looks tiny compared to the towers elsewhere, but don’t imagine it lacks potency. With an Intel Core i7 processor, Nvidia Quadro M4000 graphics and 32GB of DDR4 memory, there’s plenty of firepower in this diminutive package – decidedly more than the HP Z240 sFF. 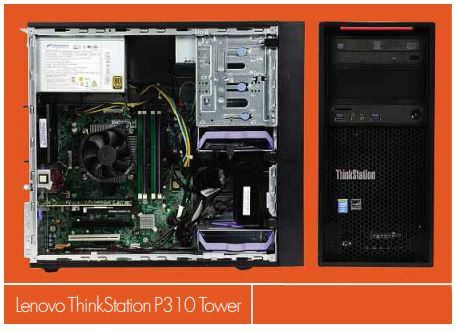 ABOVE The Lenovo is more powerful than the HP Z240 SFF, although it lacks the HP’s design flair

It lacks the design flair of the HP, though. Opening up the P310 requires undoing a pair of crosshead screws rather than being tool-free, and there are only a few tool-free or hot-swap components inside (unlike Lenovo’s full tower P500, P700 and P900 series). For example, the hard drive cages are tool-free, as are the peripheral cards, but the power supply isn’t.

Fortunately, the spec is decent for the size, so there won’t be a rapid need to open the chassis for upgrades. Intel’s Core i7-6700 is a quad-core Skylake processor, and runs at 3.4GHz natively with a 4GHz Turbo Boost.

This price only includes one PCI Express SSD for storage, with no secondary drive. But it does have a 512GB capacity and is about the fastest among this month’s systems, while there’s room for three more drives.

The Quadro M4000 is perhaps the most significant component, though.

Thanks to this graphics card, the Lenovo produced strong scores in SPECviewperf, making it much more viable as a modelling and visualisation workstation than the HP. Note, however, that the rendering score in Maxon Cinebench is the lowest here. It also struggled compared to rivals in our other rendering tests, even if these results aren’t bad in the grand scheme of PCs in general. It posted the lowest overall score in our benchmarks, too, although again not a bad result.

The ThinkStation P310 Tower packs a decent amount of modelling power into a small tower, and the price is reasonable considering the brand pedigree. But its rendering and encoding abilities are behind the competition this month.

The ThinkStation P310 Tower packs a decent amount of modelling power into a small tower, and the price is reasonable considering the brand pedigree. But its rendering and encoding abilities are behind the competition this month.