One of the smallest workstations we’ve ever seen, this diminutive pizza box of a workstation is designed to either sit underneath your monitor or orientated sideways as a rather slim tower (if you buy the optional stand). But the small size doesn’t mean there’s a puny system inside.

In fact, the Z240 SFF sports an Intel Xeon processor from Intel’s latest Skylakegeneration. It’s “only” an E3, the 3.6GHz 1270 vs to be precise, but it’s a quad-core CPU with Hyper-Threading and a 4GHz Turbo Boost, so it’s well optimised for single-threaded tasks and modest multithreaded activities. HP partners the CPU with 32GB of 2,133MHz DDR4 memory, sensibly supplied on two DIMMs. leaving another two slots free for upgrade to the 64GB maximum. 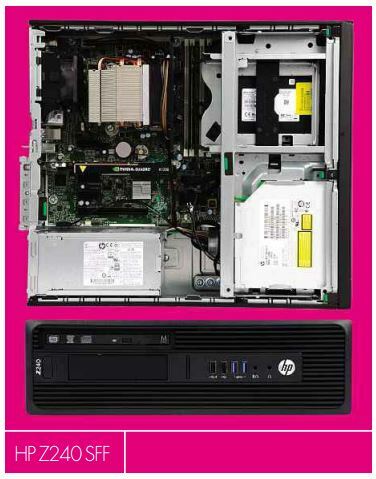 This is one of only three systems not to include the Quadro M4000, which wouldn’t even Fit in this chassis. HP opts for the Quadro K1200: still a Maxwell-generation GPU, but two steps below the M4000 in Nvidia’s current range. It packs in 512 CUDA cores and 4GB of GDDR5 memory, making it pretty potent for a 45W card. It also offers four mini-DisplayPort 1.2 connections, so can drive large multi-monitor arrays.

Storage is an unusual combination of two 256GB SSDs. one attached via PCI Express and the other via SATA. The Samsung SM951 PCI Express unit is for the OS and applications, offering reading and writing in line with other PCI Express boot drives this month. The Micron 600 SATA drive is much faster than mechanical secondary disks, albeit small.

The HP was a little faster than Lenovo’s ThinkStation P310 Tower in the PC Pro Benchmarks, and when rendering with Maxon Cinebench R15. However, the K1200 graphics meant it offered less than half the performance of other workstations in most SPECviewperf 12 viewsets, and wasn’t much better in Maxon Cinebench R15’s OpenGL test.

Where it wins, however, is in its price and size. If you’re after more modest workstation abilities in a well-designed, tool-free chassis, the HPZ240 SFF workstation is a great choice.