HERE WE HAVE it, the premier consumer enthusiast chip from Intel’s seventh generation of processors: Kaby Lake. The Intel Core i7 7700k is the replacement for the Skylake family’s Core i7-6700K, and is a fully unlocked quad-core CPU with each core running at 4.2GHz with a 4.5GHz Turbo Boost clock.

It’s important to appreciate the extent of Skylake’s success since launching a couple of years ago and, in turn, the weight of expectation that Kaby Lake chips such as the Core i7 7700k carry on their pin-freckled shoulders. Architectural improvements to the Broadwell generation’s 14nm manufacturing process made for even more power-efficient processors, which both paved the way for a host of long-lasting yet reasonably powerful laptops and 2-in-1s, and enabled enhanced performance for desktops. Skylake thus became the only kind of CPU worth bothering with, except for the occasional budget PC build. For portability , gaming or getting serious work done, however, Intel dominated, and will likely continue to do so until AMD finally launches its much-anticipated Ryzenchips.

Perhaps, then, it’s not too surprising that Intel hasn’t changed things too much for Kaby Lake – a decision which, in case there was any doubt, rings the final death knell for the ‘Tick -Tock’ development cycle.

The manufacturing process used has only been moderately tweaked: 14nm+, as Intel calls it, slims down each individual transistor while also making them taller, supposedly improving power efficiency even further. 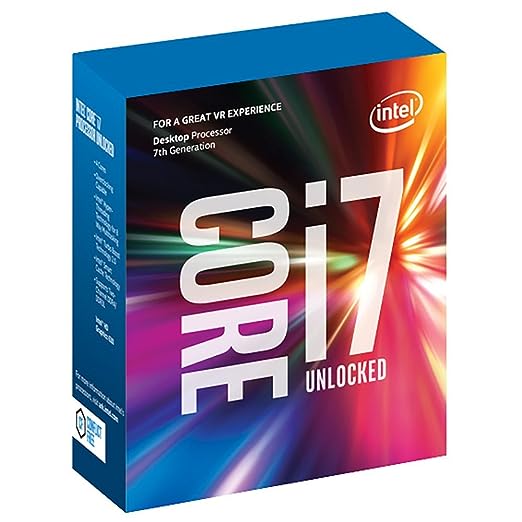 The two main differences are a slightly greater number of additional PCI-E 3.0 lanes for non-CPU hardware – 24, up from 20 with the Z170 chipset – and support for Intel Optane Technology. Optane is Intel’s upcoming line of NVMe drives, which will allegedly write faster, last longer and draw less power than conventional NAND flash storage.

However, those benefits will be largely theoretical for most users, at least until Intel actually details the capacities, prices and availability of the Optane drives. A more immediate plus point is that the Core i7 7700k uses the same LGA 1151 socket as the Skylake K-series. Considering the latter introduced this socket design, making it impossible to upgrade without also buying a new motherboard, this particular act of conservatism is great for anyone who already has a LGA 1151 board. Kaby Lake will work with older chipsets, including the Z170, though you’ll have to do a quick BIOS update.

The big issue, of course, is how the new CPU performs, and how these little changes translate into superior speeds compared to the already rather mighty Core i7-6700K.

Everything looks pretty good on paper – the individual clock speeds are slightly higher than the Skylake’s 4.0GHz base clock and 4.2GHz boost clock and, as before, the four cores are given some help from Hyper-Threading, which essentially makes Windows think it’s an octa-core chip, with the four extra virtual cores boosting multithreaded tasks such as media editing.

To test out the i7 7700k, while ensuring it wasn’t hamstrung by older hardware, we installed it on an Asus Prime Z270-A motherboard (itself reviewed on page 51) and added 8GB of RAM, the same as in our usual test PC. There’s no bundled cooler, as has long been the case with Intel’s K-series, so since we were planning to overclock the i7 7700k, we paired it with a Cooler Master MasterLiquid 240 – a decent, though not outstanding, all-in-one watercooler.

The results were surprising: good, yet slightly disappointing as well. Running our 4K benchmarks at stock speeds, the Core i7 7700k scored 142 in the image test, 155 in the video test, 174 in the multitasking test and 163 overall. These are, to be clear, the best scores we’ve seen from a consumer CPU – not counting the ludicrously expensive, super-enthusiast Broadwell-E Core i7-6950X (Shopper 342). The issue is that they’re only marginally better than what came before.

Specifically, the Core i7-6700K scored 166 in the multitasking test and 155 overall, meaning the Kaby Lake upgrade represents a mere 5% increase in both – that’s a meagre boost, especially considering Intel’s earlier claims that some Kaby Lake chips would see up to 12% better performance in local computer tasks.

Even more vexing is the video test result, as the Core i7-6700K’s score of 150 means the Core i7 7700k does just 3% better in this regard. One of Kaby Lake’s few brand-new features is a new media engine designed specifically for 4K video playback, much like what our benchmark software uses, so we were hoping for a much bigger jump.

Luckily, we did find one big improvement in the form of the Intel HD Graphics 630 processor, which replaces Skylake’s HD Graphics 530. The one area where Intel has traditionally lagged behind AMD is integrated graphics performance, but Kaby Lake finally sees it completely close the gap: 53fps in Dirt Showdown, running at 1,280×720 with High quality settings and 4x anti-aliasing, slips past the AMD A10-7850K’s 52fps and handily beats the 45fps managed by the HD Graphics 530.

True, it’s unlikely that a CPU such as the Core i7 7700k will be used much without a separate graphics card, so the HD Graphics 630’s gains aren’t particularly pertinent to this chip specifically .

Still, since the same graphics processor can be found in many cheaper Kaby Lake CPUs as well, it’s a nice upgrade for the family as a whole.

Also in the Core i7 7700k’s defence, it does deliver improved application performance over the Core i7-6700K despite both costing about the same (we found, if sticking to the most reputable dealers, the latter just £10 cheaper at most) and having the exact same 91W TDP rating. We can confirm, then, that Intel’s efficiency improvements have been successful to a degree.

Then again, the Core i7 7700k runs quite hot for our liking, even at stock speeds. With the 240mm radiator-equipped watercooler installed, it idled at around 34°C – not quite in the ideal twenties, but still within acceptable ranges. It was when running our 4K benchmarks that the chip really started to sweat, generally hovering around the 85°C area, with individual cores even briefly hitting 100°C during certain moments.

That should be worrying if you’re planning to run intensive software for extended periods of time; short forays into these kinds of temperatures won’t harm your PC, but long sessions at over 80°C could eventually cause damage.

Curiously, though, when running Dirt: Showdown, it mostly stayed within the 30-40°C range, both with a GTX 1060 graphics card doing the heavy lifting and when running straight off the integrated graphics. It’s a relief to see the Core i7 7700k isn’t overly hot as a rule – if you’re planning to focus on gaming, it should do just fine.

It’s just a shame that more multithreaded, CPU-intensive tasks cause it to get so toasty. This also made us somewhat trepidatious about overclocking it. The K-series’ unlocked multiplier does mean this process has become as simple as changing a few values, and some motherboard BIOSes can do it via a simple wizard, but what we thought was a straightforward tweak to a 4.9GHz boost clock meant that while it seemed stable at first, our benchmark software would crash after a couple of minutes of running.

Running at 4.8GHz was better, but with core temperatures now regularly poking into the 90°C range under stress, we settled on a safer (if very modest) 4.7GHz boost overclock. This saw the image score test rise to 151 and the overall score to 170, with the big winner being video, its score soaring to 173. Multitasking, on the other hand, bafflingly stayed the same, at 174.

Experienced overclockers will no doubt get better results by taking the time to tinker with voltages and/or making use of superior cooling systems, but one of our favorite things about the unlocked K-series has always been how you could make big, safe overclocks with minimal effort; this seems to have become more complex, at least with the Core i7 7700k.

Of course, the fact that it’s overclockable at all is a draw, and while the more mid-range Core i7-7600K looks like an excellent CPU, judging by its performance in the Chillblast Fusion Hubble (page 24), the Core i7 7700k is plenty fast enough at stock speeds that it will in all likelihood become the new go-to processor for premium gaming builds.

KING FOR A DAY

This is, as far as we’re concerned, an acceptable outcome – since the new model is faster (albeit only just) and doesn’t cost significantly more, the case for going with an older Core i7-6700K is minimal. Heat remains a potential issue, and is the single largest reason we aren’t furnishing the Core i7 7700k with an award at present, but if you aren’t going to be doing things such as 4K video encoding, you can keep it under control with a good cooler.

That’s our advice for anyone wanting a brand new system, anyway – for those who already own a Core i7-6700K, the minor performance gains aren’t worth the price, even knowing you don’t have to replace your existing motherboard.

It may be wiser to wait for either AMD’s Ryzen or another Intel CPU generation, one which is more of a comprehensive overhaul – like, say, the 10nm Cannonlake line due to be revealed later this year.