Last month we looked at Fractal Design’s excellent Core 500, which is fairly typical of a cube mini-ITX case. You can fit relatively large graphics cards inside it, as well as a full-sized ATX PSU, 5.25in drives, several SSDs and fans, and even a modicum of water-cooling components too. However, you can make your system even smaller if you’re prepared to chop a few items from your shopping list, and use a tiny case such as In Win’s Chopin.


Our initial thoughts when we saw images of the case for the first time was that it was a relatively attractive mini-ITX case that could compete with the likes of In Win’s own 901, or perhaps the Phanteks Evolv ITX. We were a little disappointed to read, then, that the Chopin lacked any room for expansion slots – it was a motherboard-only case. However, when we looked at the dimensions, we were flabbergasted. 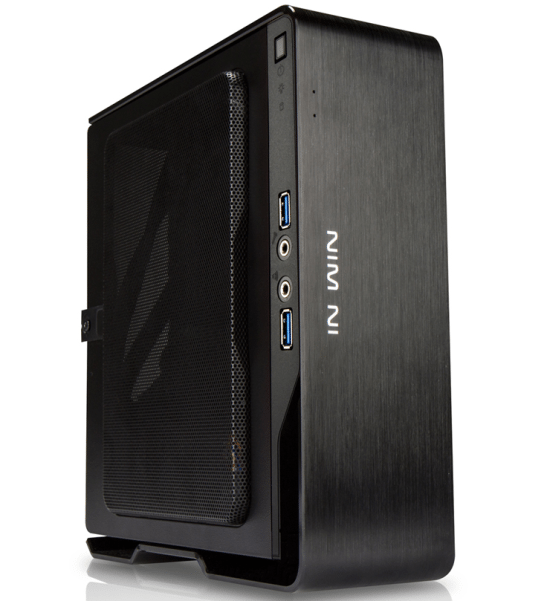 It measures only 84mm wide, just over 217mm deep and is only 244mm high. It’s barely any bigger than a mini-ITX motherboard – in fact, a micro-ATX motherboard would entirely eclipse it if it were laid on top.

The case doesn’t include a separate stand of its own but, when it’s standing upright, one side is angled to act as a base, sitting on a pair of large rubber feet. The case is just as at home lying flat in desktop mode too, although it then has a much larger footprint.

It’s extremely well made too, being constructed primarily from a single aluminium sheet that makes up the outer edge and steel innards. It also weighs a hefty 2.2kg – the Cooler Master Elite 130 only weighs 800g more yet is several times larger.

Our black sample looked gorgeous as well, with a subtle In Win logo on the front panel and two USB 3 ports, audio jacks and a power button located on one side – the case has all the usual front panel connectors for the headers on your motherboard.

Both side panels can slide off, revealing a very well thought-out interior. There clearly isn’t a lot of room for CPU coolers; the extreme height limit of just 43mm meant we had to test the case in isolation, as it was too small for our usual mini-ITX test gear. Still, it gives you just enough room to install Noctua’s excellent NH-L9i. Top-down coolers such as the NH-L9i will benefit from the large mesh side panel too, and while there are no exhaust fans or indeed fan mounts at all, the roof of the case sports another length of mesh for ventilation.

There’s clearly no room in here for a standard PSU – not even an SFX-sized one, so In Win has included a tiny 150W model, which has a small fan that draws in air from the base and out the back of the PC.

It has just enough connectors, along with a bundled SATA power cable splitter, to power a motherboard and two 2.5in drives, courtesy of a pair of mounts in the rear half of the case. There’s a lot of wasted room here though – you could easily fit a third drive here, but a 2.5in hard disk and an SSD for your OS is all most people will need these days anyway. Sadly there’s no way to squeeze in a 3.5in hard disk though.

The Chopin is advertised in a range of colours, although the actual case only comes in silver and black – the extra colour comes from a selection of included coloured stickers that can be applied to small lips in front of the side panels, jazzing up the exterior a little, which is an attractive touch. We’re massively impressed with the build quality too – not just on the outside. The steel inner frame provides a lot of the weight, and you get the feeling the Chopin would survive being carted around or dropped.

The only really notable omission is a dust filter. Admittedly, the PSU and side mesh vent have small holes, but they’re still unlikely to prevent dust ingress. That’s a shame – apart from the expectedly cramped interior, we have few other complains about the case for the money.

Meanwhile, the PSU is 80 Plus rated and has a 150W power limit. That isn’t much, but it’s enough to power most high-end CPUs, and it includes an 8-pin EPS 12V connector, a rather pointless 4-pin floppy connector and a single SATA power connector, which can be split in two using the included adaptor. Also included is a 3-pin, C5 Clover Leaf-style cable, as the PSU doesn’t use a standard kettle lead. Installing hardware isn’t too trying either, although routing cables from the main chamber to the SSDs can be a little fiddly.

Our main concern when testing small cases, as with mini PSUs, is noise. Every other PSU of this size we’ve reviewed has been noisy, sometimes intrusively so, but amazingly In Win has picked a corker here, as the PSU remained inaudible until our Core i7-2600K test CPU was under full load. Even then, it was actually much quieter than our fairly low-key Noctua NH-L9i cooler, which we’d knocked back to 7V in order to assess the Chopin’s capabilities.

Overclocking in a case such as the Chopin is a big no-no, so we settled on a stock speed with our Core i7-2600K test CPU, which has a TDP of 95W – just within range of our Noctua cooler too. If the Chopin could handle a Sandy Bridge Core i7 chip, then it would also be fine with a quad-core Skylake or Haswell chip. Under full load in Prime95’s smallfft test, the CPU delta T was 60°C, with a temperature reading of 83°C in CoreTemp. This temperature was read with an ambient temperature of 23°C, and the CPU fan was also limited to 7V, so the Chopin should have no problem dealing with CPU TDPs of 95W or less, even in summer.

We were pleasantly surprised by In Win’s Chopin. Build quality is excellent throughout and the single-piece aluminium shell looks fantastic. It’s obviously very limited in terms of space, and you’ll need to carefully select your CPU cooler, but we built a complete PC in the Chopin in less than ten minutes with little fuss. The PSU is  surprisingly capable and quiet too, even when dealing with our potent Core i7 CPU. In fact, it was quieter than the already discreet Noctua NH-L9i we used to test, making it great for a tiny, inconspicuous PC or HTPC, and an ideal partner for AMD’s low-power APUs as well. ANTONY LEATHER

The Chopin’s excellent build quality, quiet operation and miniscule size make it ideal for building a small but powerful system, as long as you don’t need a discrete graphics card.

£89.99
Added to wishlistRemoved from wishlist 0

£149.81
Added to wishlistRemoved from wishlist 0

£99.98
Added to wishlistRemoved from wishlist 0