XUB3490WQSU Review – This monitor gives you a wider choice

We know what you’re thinking. Why would I pay quid for a monitor? Now, we could quibble and point out that it’s quite possible to pay three times that, if you need professional level color reproduction. But let’s assume you don’t. The reason why you should consider the ProLite XUB3490WQSU is much more straightforward: you’re basically getting two monitors for your money.

This 34in ultra wide display looks imposing as soon as you get it out of the box, which isn’t as back-breaking as you might think, because the modestly styled plastic unit weighs a manageable 8.5kg. It’s not the most elegant-looking monitor we’ve seen, but Iiyama’s chunky design provides a good combination of stability and adjustment, with the long stand accommodating an impressive range of heights. 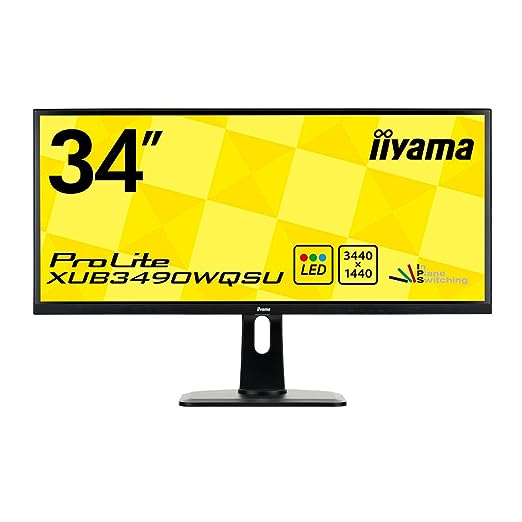 Physically, it’s not much bigger than a regular 27in display: the LCD panel has a 33 per cent greater visible area. That’s one-and-a third monitors, you might protest, not two. But Iiyama has packed the pixels tighter, so it has more than twice as many as two Full HD screens.

You can actually plug in two different PCs, or other devices with HDMI connections, and tell the monitor to show their screens side by side, or one screen in a comer of the other (picture-in-picture). But it’s best used with just one Windows desktop that accommodates twice as much stuff as usual, albeit showing everything a tad smaller. It’s also great for video editing, because you can set up your software to show a Full HD preview while still having room for your timeline, clips and controls.

It’s not quite as wide as two 1920×1080-pixel desktops, but you get extra height, which is more practical.

The 3440×1440-pixel resolution gives the ProLite XUB3490WQSU an aspect ratio that’s described as ‘21:9’. Firstly, as anyone who remembers school maths will know, you’re meant to give ratios as fractions reduced to their lowest terms. Both 21 and 9 are divisible by 3, giving 7:3. That tells you how the shape of this monitor compares to a traditional 4:3 screen. These days, of course, we’re used to 16:9 widescreen, which is why the industry likes to stick with 9 as the denominator.

Anyway, you’ll be wanting to know about picture quality. In our first test, the ProLite XUB3490WQSU covered nearly 97 per cent of the sRGB colour range with very good accuracy. Using a hardware calibrator (you can get these, such as the Datacolor Spyder5 Express) we increased this to 99.2 per cent with near-perfect accuracy. So nothing to complain about here.

The 60Hz refresh rate and 5ms (millisecond) response time are fine for all purposes, though there are no advanced features for gamers. This isn’t a 4K screen (that requires at least 3840×2160 pixels), but it did give us a noticeable increase in sharpness over 1080p when playing 4K movies from services such as Netflix.

You could get two basic monitors for less, but with great image quality, less clutter and no gaps, this is an excellent option

Picture quality isn’t quite as good, but this attractive older model has similar features and at current discounts its a real bargain