While necessary to some degree, manufacturers often ruin the stylish good looks of their monitors by using an extraordinarily thick lump of plastic around the edges of the screen. That’s not the case with this new display from BenQ, though. 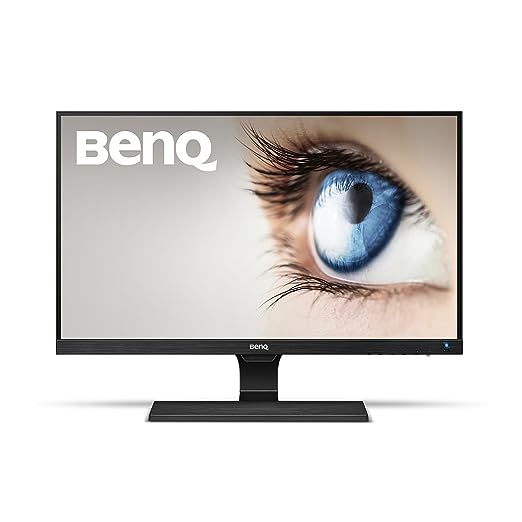 The main draw of the BenQ EW2775ZH is its near bezel-less sides and top. Not only does it look remarkable, but it fools you into thinking the screen size is bigger than it actually is. Not that there’s anything small about the 27″ AMVA LED to begin with, and the full HD display with a dynamic contrast ratio of 20,000,000:1 produces a more than adequate image.

Viewing angles are a good 178° on both the horizontal and the vertical, and because this is a BenQ monitor, it features extra viewing technology in the form of a flicker-free backlight, low blue light modes and good control over the screen thanks to the BenQ Eye Care features.

Connectivity is good too, with a pair of HDMI ports, VGA, line-in and a headphone port. There’s no DisplayPort or DVI, though, so you’ll need some kind of conversion along the way if your setup can’t directly cope with the lack of these ports.

Returning to the style and aesthetics of the monitor, the bezel (what little there is of it) around the sides and top of the screen measures just 2mm, with the bottom portion of the monitor measuring 20mm, displaying the BenQ name and a Bl (Brightness Intelligence) button, which automatically adjusts the levels to help reduce eye strain. It’s easily one of the thinnest frames we’ve ever come across on a monitor, and if you place two of these together in a dual desktop setup the near seamless effect is simply wonderful.

The quality of the image displayed is as good as you would expect from a good modern AMVA LED monitor and from a company that excels in producing all-round good monitors. It’s clear, sharp and produces good depth of colour. There’s an equally good production of very bright and very dark areas, with the high gamma helping to separate the two with an astonishingly good degree. As we said earlier, the thin surround makes the monitor ‘feel’ surprisingly bigger than it actually is. An optical illusion it may be, but it’s certainly a good one.

Games, films, photo viewing, editing and video editing duties were all excellent, especially the brighter elements, where there’s often some graininess from other VA panels, but thankfully not in this case.

The BenQ EW2775ZH is a great full HD monitor. The screen is good and the thin bezel makes for a far more stylish monitor than we’re generally used to using. It’s also not too badly priced either. The only downside is the lack of DisplayPort and DVI, which may ultimately affect your decision to buy.