Predator branding and a sharp-angled, red and black stand make this unashamedly a gaming monitor. Still, we like the design; the stand is rock-solid and the screen is easy to adjust for height, tilt and rotation from left to right and from landscape to portrait. 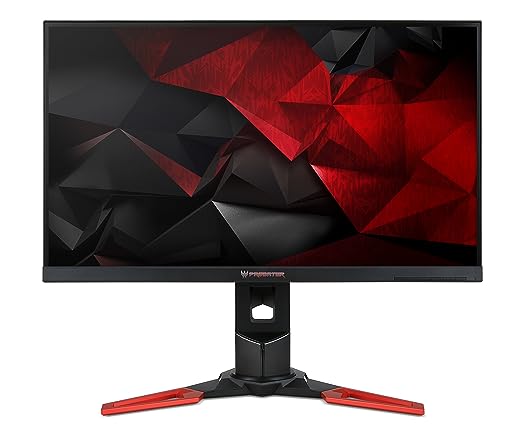 The stand may be stable, but it’s also a substantial 445mm wide and 235mm deep, so make sure your desk has enough space, though the tiny bezels would make it easy to have a near-seamless desktop with two of these screens side by side. There are HDMI and DisplayPort inputs, a headphone output and a USB3 hub with two ports on the bottom of the monitor and two on the left.

Five buttons on the bottom bring up the onscreen menus. As with most displays (the Asus ROG Swift PG27AQ), these are tricky to navigate until you get used to the control system.

The options are, at least, arranged in logical categories. You can select from Acer’s Movie, Graphics and Eco presets, or tweak colors, contrast and brightness yourself. There are some special functions such as Dark Boost, which lightens darker areas to give you the edge in gloomy games at the expense of contrast. You can also reduce the amount of blue light the monitor gives off, to avoid disrupting sleep patterns. Knocking the blue light down to 50% made the monitor more pleasant to use when working.

There are some gamer-specific functions as well, including three ‘game mode’ presets, where you can save custom monitor settings to recall at the touch of a button -though we’re not sure how these differ from standard monitor presets. You can also toggle a crosshair in the middle of the screen for shooting from the hip, but this feels old-school and can spoil immersion.

The screen has a pixel overdrive (OD) function. This is designed to reduce ghosting, where pixels cannot keep up with the action onscreen, resulting in blurred images. However, ghosting is more of a problem at refresh rates higher than 60Hz, and we didn’t see much improvement using the tests at testufo.com/ghosting. Setting OD to Extreme also added significant artefacts to the image.

G-Sync is at its most impressive when a game is running at less than the standard refresh rate of the monitor, when it can make frame rates around 35fps look far smoother. This monitor’s 4K resolution is a challenge for any graphics card, so G-Sync is particularly useful. In Dirt Rally, running at 3,840×2,160 with Ultra detail and G-Sync off, we saw a regular 35-40fps and significant stuttering, but with G-Sync turned on the game was perfectly smooth: even once we turned down the detail and turned on V-Sync to lock the game to 60fps, we could barely tell the difference between the lower and higher frame rates.

The screen acquitted itself well in our image-quality tests. Before calibration, it was covering 100% of the sRGB color gamut with a low Delta E color deviation of 0.54. Results after calibration were similar, but the calibration program brought the screen much closer to the ideal color temperature of 6500K, with 6539K compared to 6727K pre-calibration. Image quality is still great out of the box, with a high contrast ratio of 1,018:1 helping our test photos shine.

The XB271HK is an excellent 4K gaming monitor, and should be on the shortlist of anyone with a powerful Nvidia card

There was one significant problem, and that was visible backlight bleed at the bottom-left of the screen. This was confirmed by our color calibrator: in the middle of the screen it recorded a black level of 0.272cd/m2, but at the bottom-left this rose to 0.555cd/m2, which in turn reduced the contrast ratio to 401:1. It’s a shame, but won’t affect most users.

The Acer Predator XB271HK is an excellent 4K gaming monitor, and it should be on the shortlist of anyone with a powerful Nvidia graphics card who fancies a bit of stutter-free 4K gaming. Those into twitchy shooters may find the 60Hz refresh rate isn’t enough, however, so should consider the 144Hz XB270HU instead.