In his quest for more Pi, Les Pounder is told to go on a diet. We think he may have misunderstood the request…

A lightweight, server-oriented distribution that offers an initial small install of around 2GB.

A DietPi can be configured quickly to meet the needs of the user via a clever menu system. Available for all models of Pi and other single board computers, this is the lightest of the light while still retaining power features for the serious system administrator.

DietPi review: Features at a glance

DietPi is available for a range of single board computers, such as the Orange Pi and ODroid.

With dietpi-backup you can back up a server configuration to a local disk or remote file system.

When someone says Raspberry Pi, then of course you think Raspbian, the default distribution for the Pi. However. Raspbian is a big distribution that requires at least an 8GB microSD card for all its great software. What if you want to build your own Pi server? Do you really need all that bloat? Sounds like we need to go on a diet!

DietPi is a lightweight distribution that uses the base Raspbian (Debian) distribution. DietPi kernel 4.9.52 from 2 October 2017. and puts it on the cabbage soup diet. Gone is the desktop. Sonic Pi and other popular applications and in their place we find a bare bones server distribution offering stability and low-power consumption.

But DietPi has a neat trick up its sleeve: its ease of use. Typically, setting up a server takes time and skill, but what DietPi provides is an easy-to-use workflow for those wishing to set up a simple server in their home or development environment.

DietPi is best enjoyed on a 4GB or larger microSD card and it’s compatible with every model of Raspberry Pi. even the very first model of Pi back in 2012! Installing DietPi on an SD is identical to Raspbian. requiring the image to be written to a blank card. On boot DietPi doesn’t have a flash boot sequence: rather, it gets to work straight away. Via an interactive installer that updates the distribution to the latest software, very handy as this ensures the system is up to date and ready to be used. 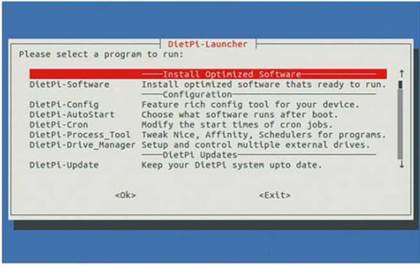 DietPi may not look pretty, but under the hood we have a powerful yet easy-to- use server that’s suitable for all levels of user.

Once installed. DietPi uses a whiptail menu system, which can be called at any time from the command line, enabling anyone to administrate their system. We used the Ethernet configuration tool to copy our interface settings (from DHCP) and set them as a static IP. all by pressing one key!

Installing software is also ridiculously easy. DietPi has its own software menu that includes software which has been optimized for use with the distribution. To test installing software with DietPi we went to the Software Optimised menu and found ourselves in wonderland!

The list of optimized software isn’t exhaustive, but it covers many popular applications for a Raspberry Pi. NFS. Samba and Cloudprint servers can be easily installed, and we even found an entry to install OctoPrint. a web interface for 3D printers. We chose to install Pi Hole, an ad-blocking DNS server that sits on your home network and stops ads from being served to devices using the DNS server. The install for Pi Hole took around ten minutes, largely due to a number of package installs. But once installed all we needed to do was point our devices to the DietPi/Pi Hole DNS server and everything worked.

The simplicity is the beauty of DietPi. From the menu we can set up our Ethernet/WiFi to use static IP addresses. We can configure Bluetooth and I2C for devices and sensors. We can stress-test the RAM. CPU and file system to ensure that our platform is fit for purpose. DietPi can also be used in the same manner as a normal Raspbian or Debian server.

We’re impressed with DietPi. It’s a lightweight, practical distribution for those that just want to quickly deploy a server. It may not be for hardcore sysadmins, as servers typically require “tweaking” for the best results (and there’s nothing stopping a sysadmin from doing that), but for the Pi user wishing to try something new. DietPi is an ideal choice. It may even bring new life to older models of Raspberry Pi.

Powerful, lightweight and easy to use. If you need a small Pi-based sewer for a project, consider DietPi.