Calculate Linux Review – The Calculate Linux project produces a handful of distributions all based on the venerable Gentoo Linux. In addition to a bunch of desktops for regular use. there’s Calculate Directory Server (CDS). Calculate Linux Scratch (CLS). and Calculate Scratch Server (CSS) for business and advanced users.

CDS can add clients through LDAP and Samba, and Directory Server also includes Mail, Instant Messaging via Jabber and other functions. If you want to spin your Gentoo-based distribution, you can use CLS and CSS, which include everything you need to build your own desktop or server variant. 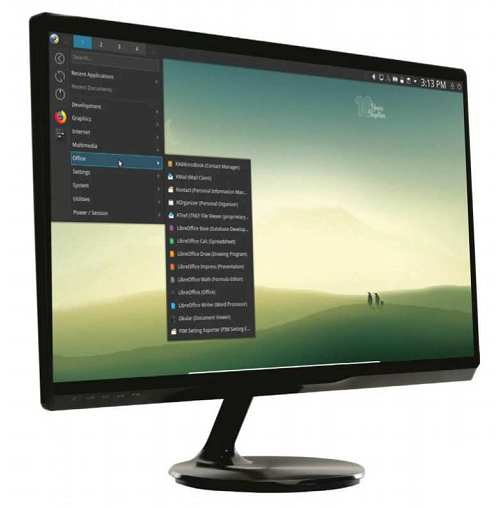 The desktop release has several editions of its own. Besides the headline KDE release, there are spins based around the Cinnamon, Mate and Xfce desktop environments. The last major release of Calculate Linux included several performance tweaks: the developers rolled Con Kolivas’ MuQSS patch into the kernel to boost the distribution’s application task-scheduling. They also added the UKSM kernel patchset to eliminate duplication of data in the system memory, plus the ability to install Calculate Linux on a software RAID. The latest update to the 17.12 release is based on Gentoo 17.0.

The marquee desktop release features a customised KDE desktop. Unlike the traditional version, Calculated has a taskbar at the top of the desktop and a hidden dock at the bottom. Also unique to the project is the homebrewed custom installer to help you anchor the distribution to your

Calculate Linux does its best to make Gentoo’s Portage package management system friendlier to use: there’s a graphical utility that can help keep the system updated

computer: this is more verbose than Anaconda. Ubiquity or the distribution-agnostic Calamares installer. It ships with adequate defaults that should meet the requirements of most new users, but also adds an advanced option to every step, to enable you to mould the installation as you like. Once you’ve finished with the installation, you arrive at a desktop that’s chock-full of apps. The usual raft of KDE apps are complemented by non-KDE mainstream apps such as Firefox, Pidgin, the GIMP, SMPlayer and of course LibreOffice. 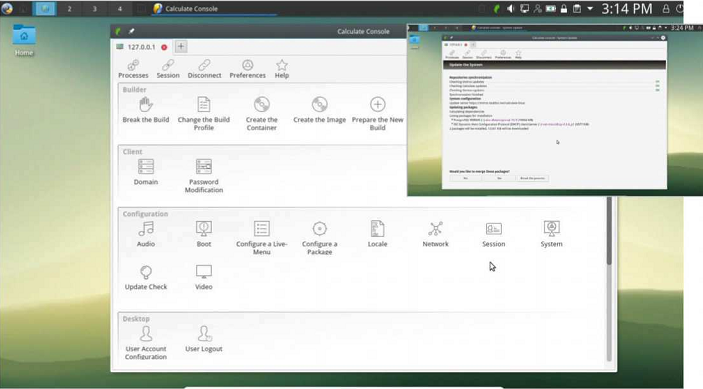 Above In addition to supporting 32-bit computers, Calculate Linux is one of the few distributions that doesn’t use the systemd service manager

While it has an impressive collection of apps. what really sets the distribution apart is its set of custom utilities for managing various aspects of the installation. You can access all of them from the graphical Console Manager app. but this app is perhaps both the distribution’s biggest strength and biggest weakness. On the positive side, it might be the most diverse configuration app available, as it can do everything from managing users to preparing and building a custom distribution. On the downside, it’s anything but intuitive. Some modules, such as the User Account Configuration, lack any options that hint towards their function. To make matters worse the Console Manager and its various utilities are sparsely documented, although in general Calculated website does have a multilingual documentation section that’s fairly well stocked.

This tells you how to customise the kernel or make apps load faster, as well as covering several other server configuration-related tasks, but it fails to shed light on the features that make Calculate unique among its peers.

Another downer is the distribution’s package management. Calculate Linux does its best to make Gentoo’s Portage package management system friendlier to use: there’s a graphical utility that can help you keep the system updated, but to install new packages you’ll have to roll up your sleeves and head to the terminal. Admittedly, this isn’t too difficult, thanks to the eix set of utilities, and the process of installing packages via emerge isn’t all that different from using dnf or apt. But then again, the lack of a graphical package management tool does severely limit the distribution’s appeal.

You won’t find many desktop-orientated distributions based on Gentoo, and Calculate Linux is definitely one of the best. It’s a good stepping-stone for anyone looking to ‘level up’ to Gentoo.

Its shortcomings could be cured by adding more documentation.

Graphics Video adaptor and monitor with 1,024×768 or higher resolution