The problem with new internet and system security software isn’t so much the advanced levels of protection that continually need to be updated and act intelligently, it’s trying to package all of that along with useful features and tools in an easy to understand and use front-end. It’s devilishly tricky to get the right mix, while still having a friendly interface for the user.

Bitdefender, though, has once again managed to pitch the right level of usefulness, tools and features, while still incorporating an astonishingly high level of intelligent security, with its latest all-in-one protection product, Total Security 2016. 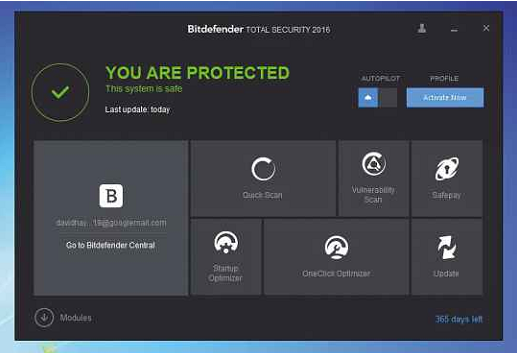 The front end is surprisingly easy to navigate, considering the technology contained within

The latest threats to your system are blocked with a unique combination of advanced Artificial Intelligence, machine learning scanning techniques and Cloud based technologies. For example, the rising trend in ransomware is kept at bay with the world’s first proactive protection system that will prevent any untrusted program from deleting or modifying work documents, images, videos and the usual targeted folders. There’s also a dual layer approach to anti-ransomware with a Ransomware Behavioural Detection (RDB) system, which will scan all installed programs for hints of ransomware activity and take measures to stop it and protect your data. 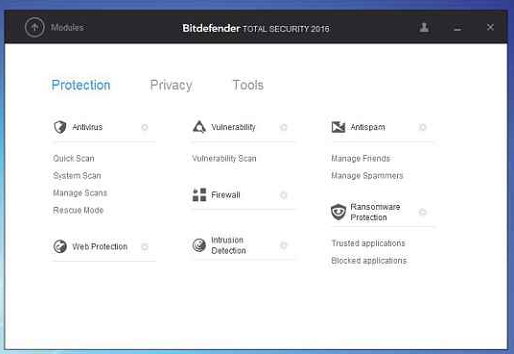 Of course, this is just one element of the many-layered steps Total Security 2016 takes to keep your system safe. The anti-spam, web filtering, anti rootkit, anti-malware, and anti-virus protection features are by far the best in the industry, and are continually improving thanks to the intense development cycle of Bitdefender’s updates and the detection abilities of the machine learning-based technology.

Preserving your computer’s performance levels is also a top priority. We’re told the software is capable of adapting to your configuration and conducting its scans and system monitoring without having any perceivable impact on the speed of the system. That’s no idle boast, or marketing guff, either. Testing on an old Dell laptop, carrying a Windows 7 image riddled with a selection of malware and viruses, Bitdefender caused, at most, a 2% drop in the overall performance of the system. The end result is a computer that’s still useable, even when having its digital guts turned inside out in the hunt for threats.

Considering the amount of technology that’s lurking under the surface, the software’s also easy to use.

The dashboard consists of seven one-click tiles, for accessing a particular element, scanning the system, or logging into the new Bitdefender Central – an online console that keeps management of your subscription and devices, alters and upgrades. You can dig a little deeper of course, accessing individual modules and tweaking the settings for your protection and privacy, as well as listing the tuneup and anti-theft tools.

There’s a lot to take in with Bitdefender Total Security 2016, more than enough for those with a particular need to take advantage of. However, it also manages to cater for those who just want a simple interface and not to worry about what’s going on behind the scenes.

Does Bitdefender still retain its crown as the best security system available? Yes, quite frankly, and it looks to keep that position for some time to come too. So, if you require a complete security package for your systems, look no further.

A good price for the ultimate in system security and protection..