The king of all gaming displays

The era of the premium of gaming display has finally come of age. We’ve always had a small niche of PC screens targeted at gamers, but nothing like the huge range available today. Leading the charge for screens aimed squarely at gamer’s retinas is Asus, and the new PG348Q looks set to topple all pretenders.Yes, a hell of a lot for a display, but you’re getting a hell of a lot for your money. The sheer dimensions alone are huge, measuring a horizon-spanning 34 inches across the diagonal. It’s one of these newfangled Ultra-Wide screens, which means it has a 21:9 aspect ratio and a resolution of 3440 x 1440. In the past this would have caused issues for gamers; as we sit so close to the screen, the outer edges of the display would show color and brightness shift. The PG348Q solves this in two ways, starting with an ever-so-slight curve. It’s barely noticeable to be honest, but the second solution to the problem eliminates it entirely – the use of an IPS panel. These have a huge 178 degree viewing angle, much wider than that of TN panels, so there’s no color or brightness issues when you look towards the edge.IPS panels are generally limited to 60Hz, but once again Asus has managed to blow this refresh rate out of the water. An overclocking button bumps it up to 100Hz, more than enough to make your games flow like liquid mercury. As if that wasn’t good enough, it’s also a G-Sync panel, so you can run it at a wide variety of framerates with nary a stutter or screen tear. Note that you’ll need a GeForce GTX 980 Ti or above to overclock the refresh rate to 100Hz, which is a rather interesting limitation that might deter some. Though if you’re spending on a display, you’ve probably already got three of these suckers in your PC. 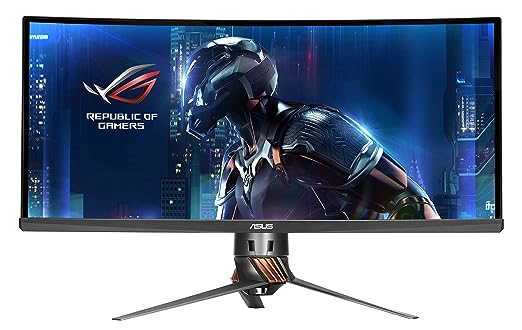 The physical design of this display is absolutely stunning, from the edgeless screen design to the ultra-modern stand. Both HDMI and DisplayPort are included, along with four USB 3.0 ports. Asus claims a response time of 5ms, and we couldn’t find a hint of motion blur even when playing the fastest of games, such as Quake Live.

We used a colorimeter to measure some of this screen’s vital specs, and found that the contrast ratio wasn’t quite as high as advertised, hitting 665:1, whereas Asus claims it’s 1000:1. Having said that, in-game we didn’t notice any overly harsh contrast problems. Colour calibration required a little tweaking of the monitor’s profile to get it to almost perfect results, but even at default it looked better than most TN panels, a benefit of the beauties of IPS.

This display is well out of the price range of most gamers, but if you’ve got the cash to spend and want the best-inclass gaming display on the market, we’d have to give the PG348Q two thumbs up, bearing in mind the limitation of using it with a GTX 980 Ti. Now if only Asus could somehow make it compatible with AMD’s Free-Sync technology as well, it’d be absolutely perfect.

Say hello to the king of premium gaming displays.